In our last article we looked at the reasons why the golden hour is such a productive time for photographers. Another reason why working in the golden hour, especially in the evening, works so well is that it leads naturally to the blue hour.

When is the blue hour?

The blue hour occurs in the evening after the sun has set and the natural color of the ambient light is blue, and in the morning before sunrise with similar lighting conditions. Personally I find the evening blue hour easier to work in as the progression from golden hour to blue hour to night seems more natural.

PhotoPills defines the blue hour as occurring when the sun is between -4 and -6 degrees below the horizon (more details here). 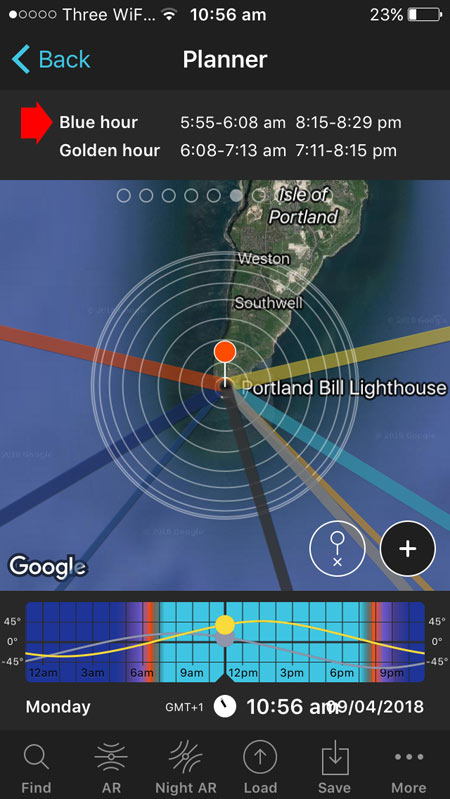 As you can see, the blue hour is much shorter than the golden hour, so it’s a good idea to have your composition and viewpoint worked out in advance so you can take advantage of it. Smart photographers do this during the golden hour so they are prepared.

While apps like PhotoPills use a specific criteria to calculate the start of the blue hour, in reality the line between it and the golden hour is more blurred. There is a gradual transition as the colors from the sunset fade and twilight grows deeper. 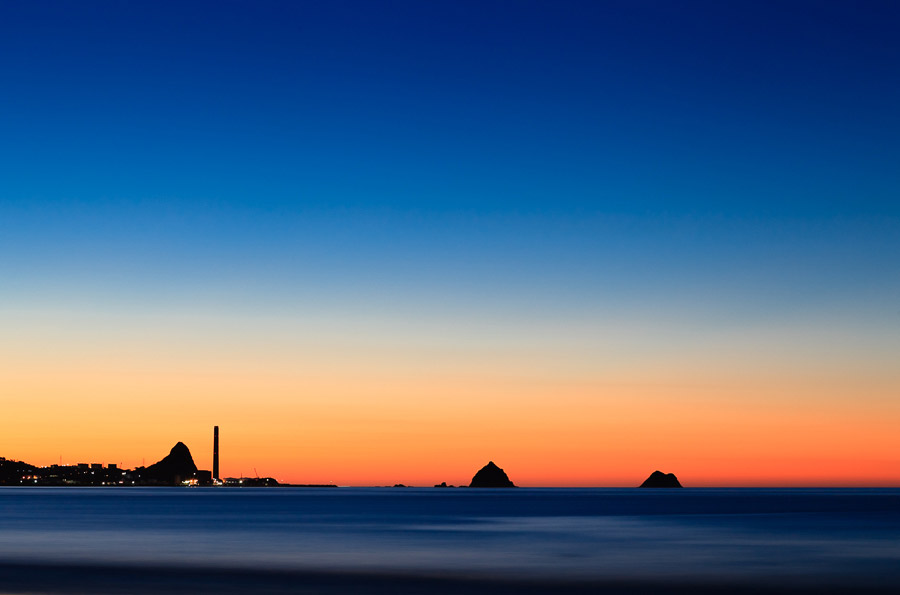 I’ve always liked the idea that great photography happens on the edges. The blue hour is a kind of edge that marks the transition between night and day. I think of it as the magic hour. While the low light levels can be technically challenging, the reward in terms of quality of light are well worth it.

The blue hour and landscape photography

The blue hour is particularly suitable for landscape photography. Whenever I’m on location and see other photographers, I’m always a little surprised how early most of them leave. For the few that wait until the sun has set the reward is often an intensely beautiful, soft golden glow that gradually fades as night falls.

The is especially beautiful if you are by the sea or a lake as the water reflects the colors in the sky. Then, as the light fades away and stars begin to appear, you enter the blue hour. 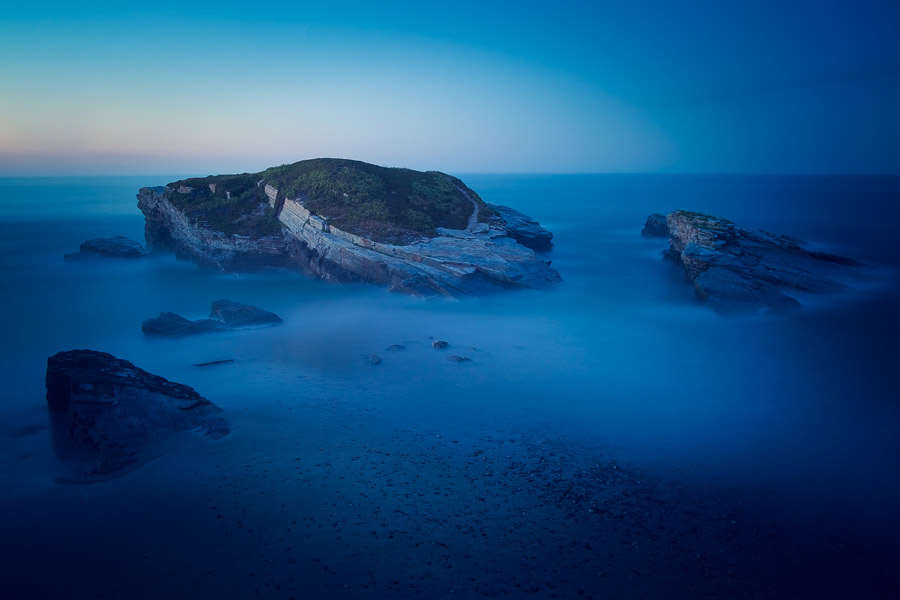 Working in the blue hour opens up interesting possibilities if you can include tungsten lights or flames in the scene, as it sets up an evocative color contrast between the deep blue sky and the orange light (from an aesthetic point of view it’s a shame that LED and fluorescent bulbs have become so popular). Steel wool spinning photos, like the one below, are a good example. 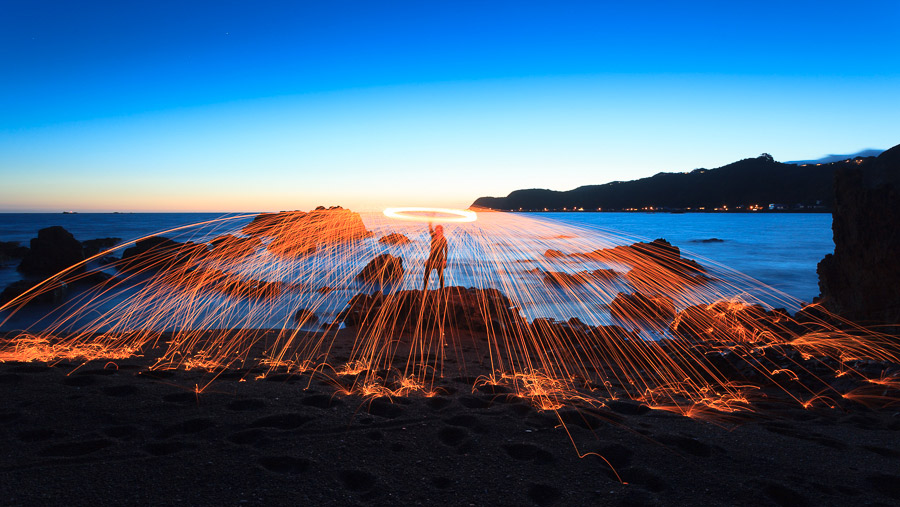 Light levels are so low during the blue hour that you definitely need to use a tripod to support the camera. The tripod lets you use a low ISO for the best image quality and a long shutter speed to blur the movement of moving elements such as water.

The blue hour and the urban landscape

The blue hour is also evocative in the urban landscape. Again you have the opportunity to combine the blue ambient light with tungsten and other artificial light sources.

Unlike landscape photography there may be enough ambient light to let you take photos with a hand-held camera at high ISOs. A prime lens, which has a wider maximum aperture than a zoom, may also be useful.

I made the photo below in Hong Kong, focusing on a nearby building and throwing the brightly lit skyscrapers in the distance out of focus. 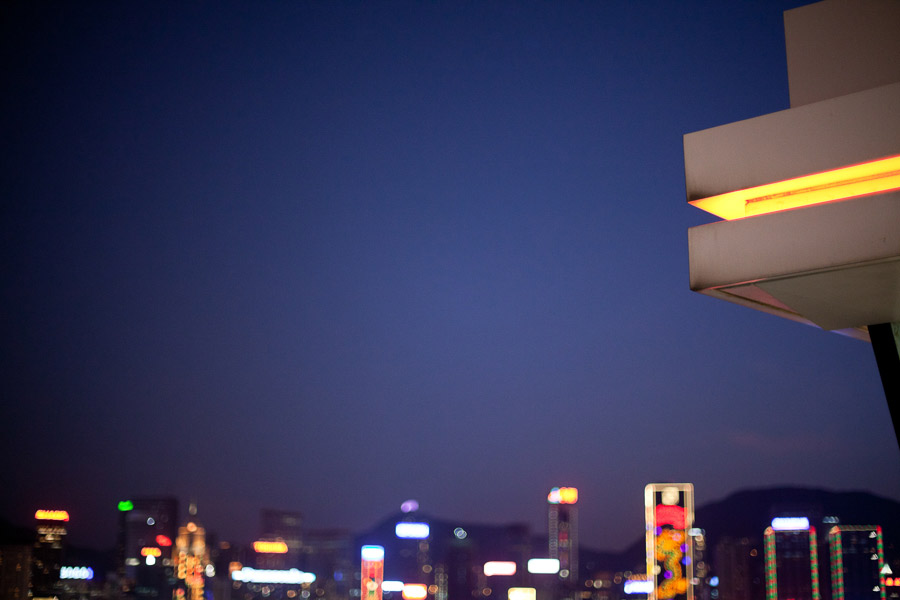 Another approach is to photograph buildings by water. If you get the timing right you’ll capture the reflections of lights in the water, with enough light in the sky so it comes out deep blue rather than black. 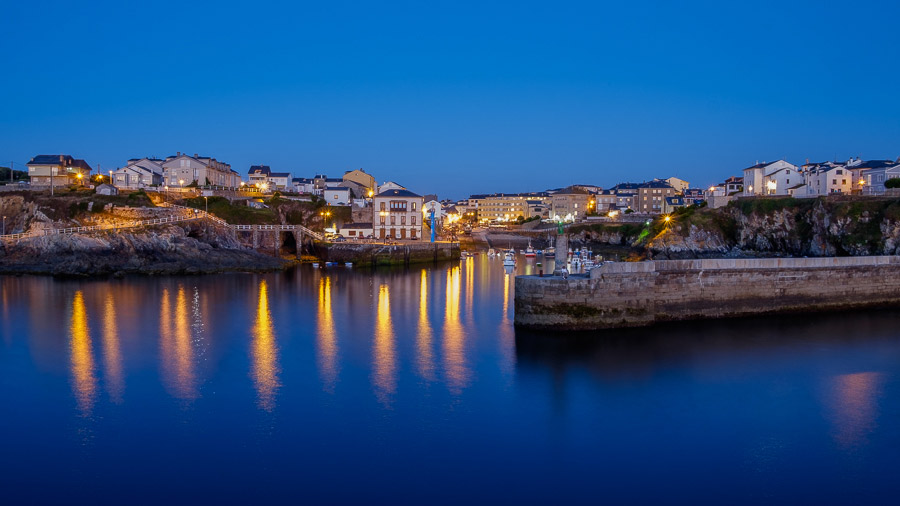 Painting with light during the blue hour

The blue hour is also the ideal time to experiment with painting with light techniques. This is where you use an artificial light (like portable flash or torchlight) to illuminate part of the subject. If you use your imagination there are lots of ways you can put painting to light to use.

For example, I used an LED torch covered with a red gel to light the foreground in this landscape photo. 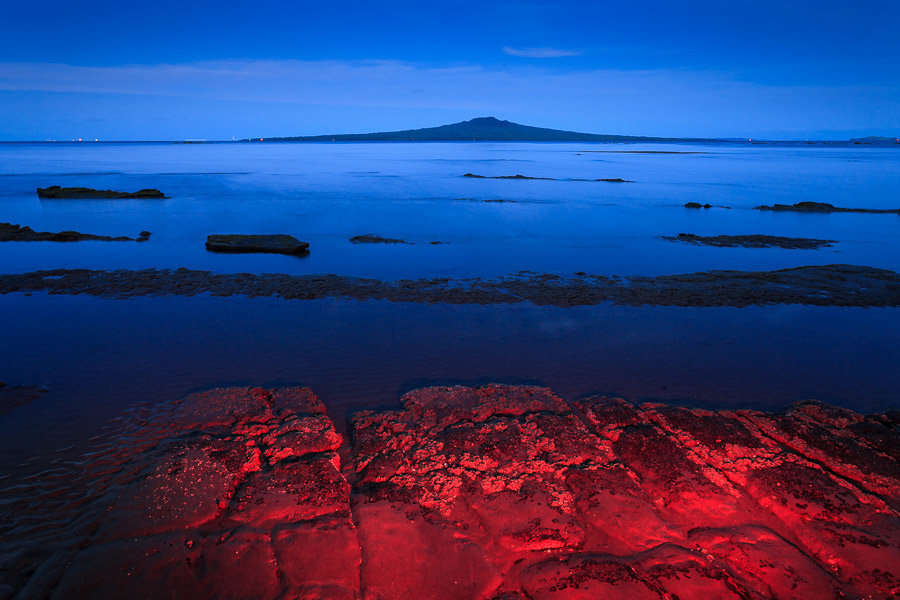 I used a powerful LED torch with an orange gel to light the rocks in this landscape photo. The shutter was open for seven minutes and you can see the movement of the stars in the sky. In reality, this photo was made after the blue hour had gone, but it shows the possibilities if you are willing to experiment with shutter speeds of this length. 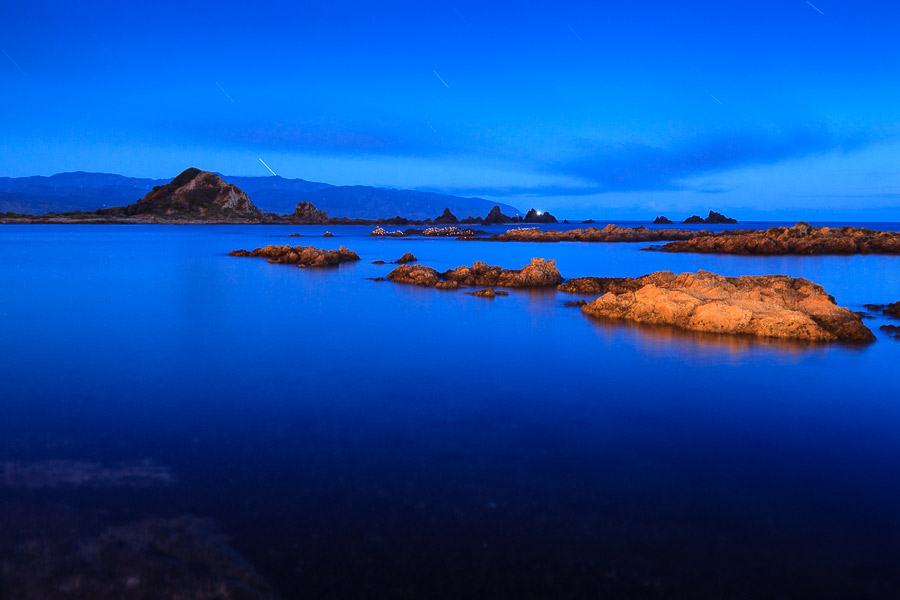 I used portable flash with an orange gel to light the wooden building in this photo. I fired the flash several times during a 30 second exposure. 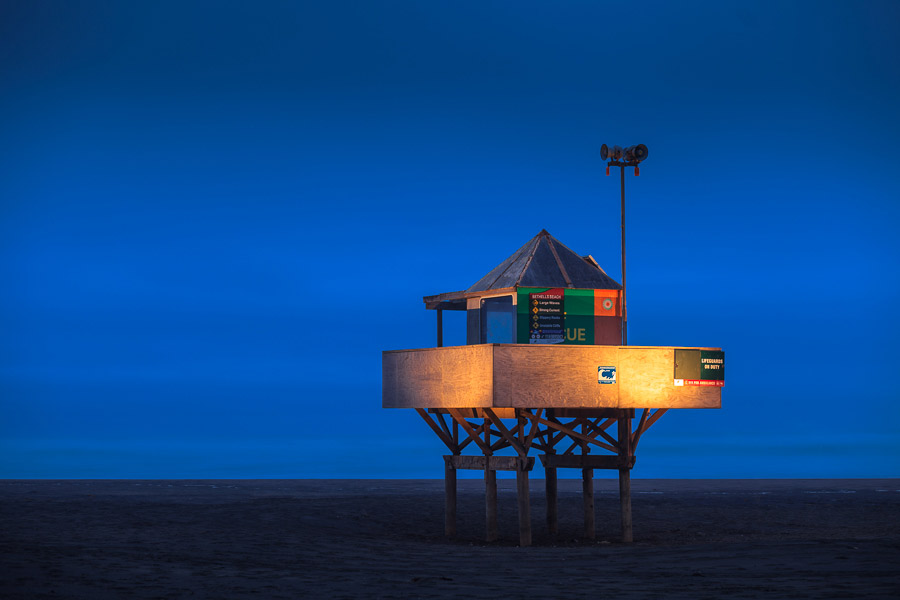 I made this photo with the assistance of a friend using an electronic hula hoop to create the patterns of light. 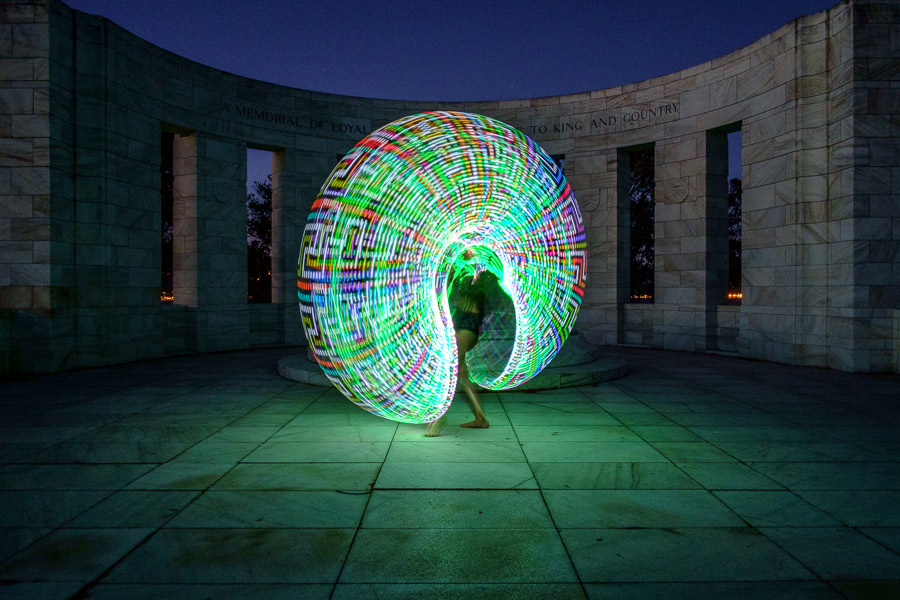 The benefit of painting with light during the blue hour is that there’s enough ambient light to give a good exposure on the part of the scene that isn’t lit by any artificial light. Plus, the low light levels mean you can use a shutter speed long enough (around 30 seconds or so) to give you time to carry out your painting with light technique.

The blue hour is a wonderful, magical time for photography. If you are photographing the landscape, especially one with water in it, it’s worth sticking around after sunset to see if you can make the most of the conditions. Stay long enough and as the stars come out you may even get a chance to try your hand at astrophotography.

How To Use The Golden Hour In Photography

Five Strategies For Coping With Hard Light In Photography

How To Use Soft Light In Photography