Editor's note: This month only – enroll in my new course Finding your Creative Voice for just $19! Click here to learn more. Thanks for reading, Andrew.

Contrast occurs naturally when you’re shooting in strong sunlight or indoors using window light. If you expose for the highlights you’ll automatically get strong shadows thanks to the relatively limited dynamic range of your camera’s sensor (which is a good thing in this situation).

You can also make shadows darker in Lightroom Classic to exaggerate the effect if your camera picks up a lot of shadow detail.

A slight change of mindset may be required. The camera’s relatively limited ability to record good detail in both the brightest and darkest parts of the scene in hard light is not a limitation. It’s just a characteristic of the way cameras work, and one that photographers have always had to deal with. Instead of seeing it as a limitation, you should see it as another tool that you can work with to create more interesting compositions.

In this mindset, good shadow detail isn’t essential in every photo. Shadows should be dark and mysterious. They leave it to the viewer’s imagination to fill in the gaps.

For example, in the photo below I exposed for the brightest part of the scene, which is the part where the old car seat is lit by the sun. 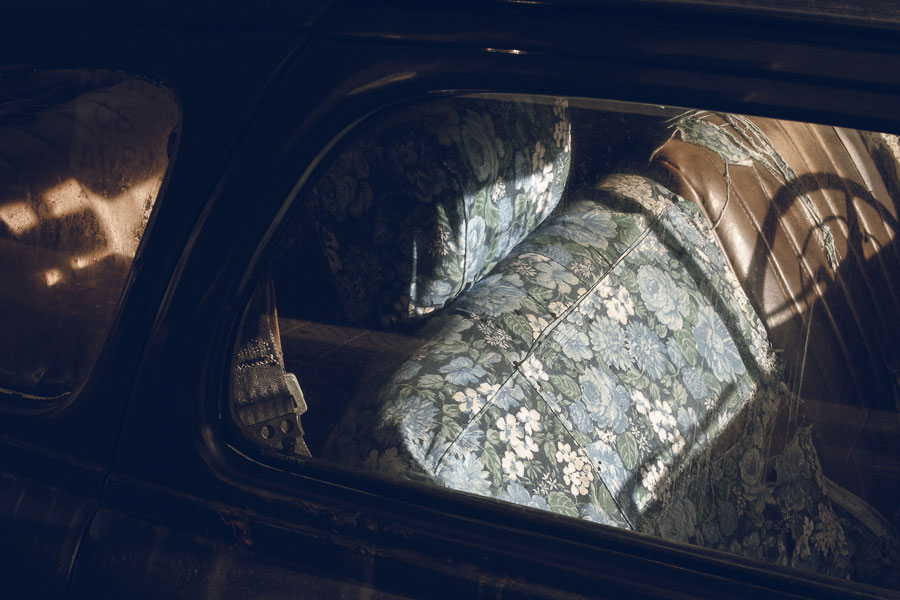 But what does that mean? In this case it meant that I made sure there were no overexposed highlights (use the histogram or blinkies to check for this).

Depending on the brightness range of the subject and the camera’s sensor, in this kind of lighting that usually means that there’s little or no detail in the darkest shadows. And that’s perfectly okay, as we’ve already seen.

In the photo above there is very little detail in the car’s bodywork and the deeper shadows in the interior.

Most photographers understand that the golden hour is the best time of day for moody, evocative lighting. The light is much harder when the sun is higher in the sky. This type of lighting is usually unsuitable for landscape photography. But it can be very interesting for photographing buildings.

I made the photo below in Granada, Spain. I took it inside a former residence now used as a museum. The architect had designed both the interior and exterior spaces to make use of the strong Spanish sun. The way the shadows fall across the scene works with the hard geometry of the concrete wall to create a dramatic composition. 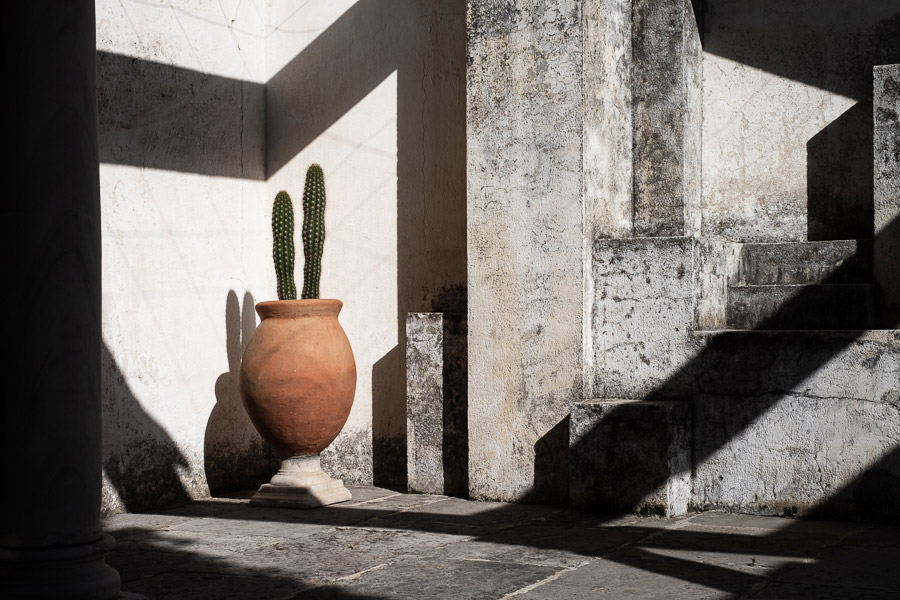 It isn’t necessary to have visible detail in the shadow, although a little doesn’t hurt. You can use Lightroom Classic’s Shadows slider to make the shadows darker or lighter. Just make sure you use the Raw format so the file has the maximum amount of possible detail.

Dramatic images with strong shadows like this work well in black and white. Removing color seems to emphasize the depth and strength of the shadows. It adds drama to the composition. You can add impact by increasing Contrast in Lightroom Classic, and emphasize textured surfaces like concrete with the Texture and Clarity sliders. Here’s what the above photo looks like in black and white. 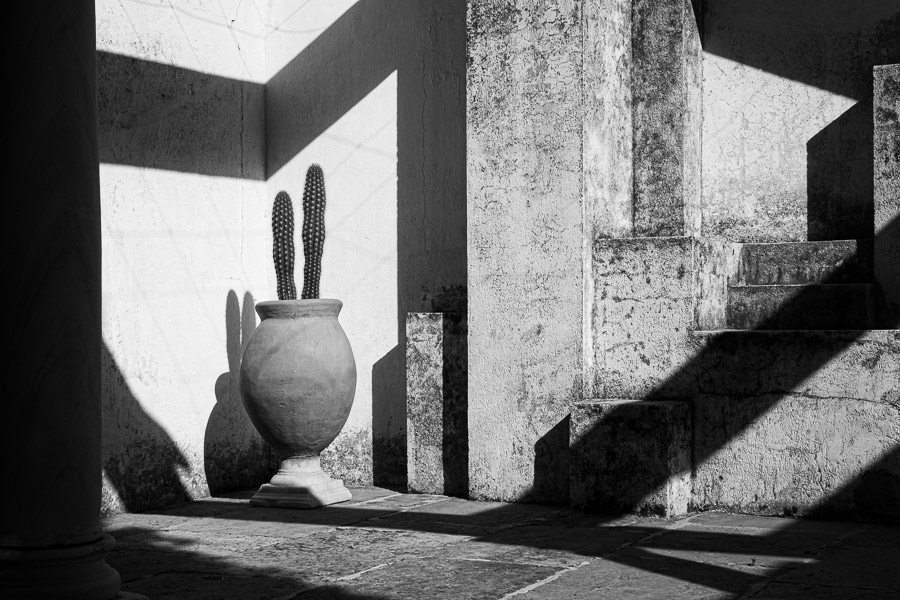 I played with a similar technique in the Alhambra, Granada’s famous Moorish palace, to make the following set of dramatic photos. 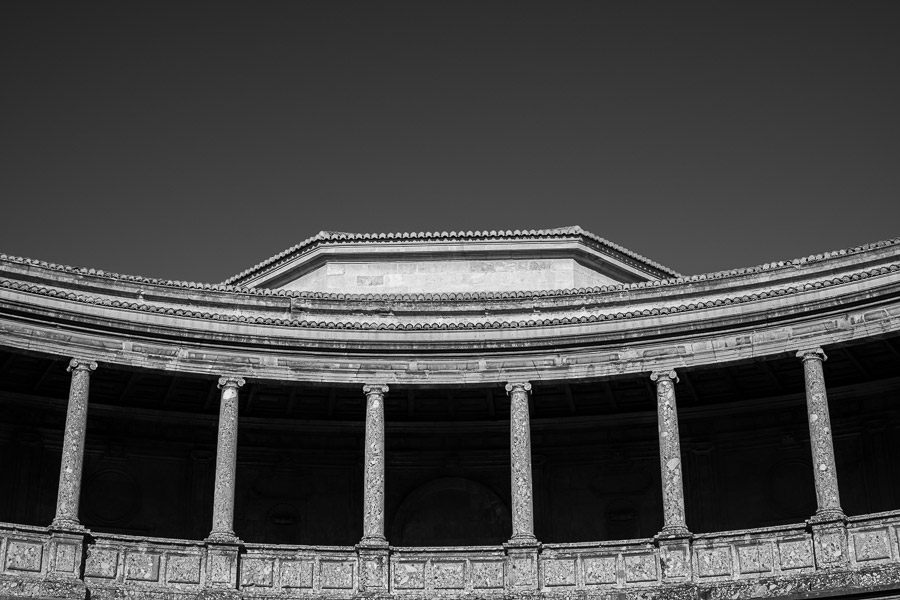 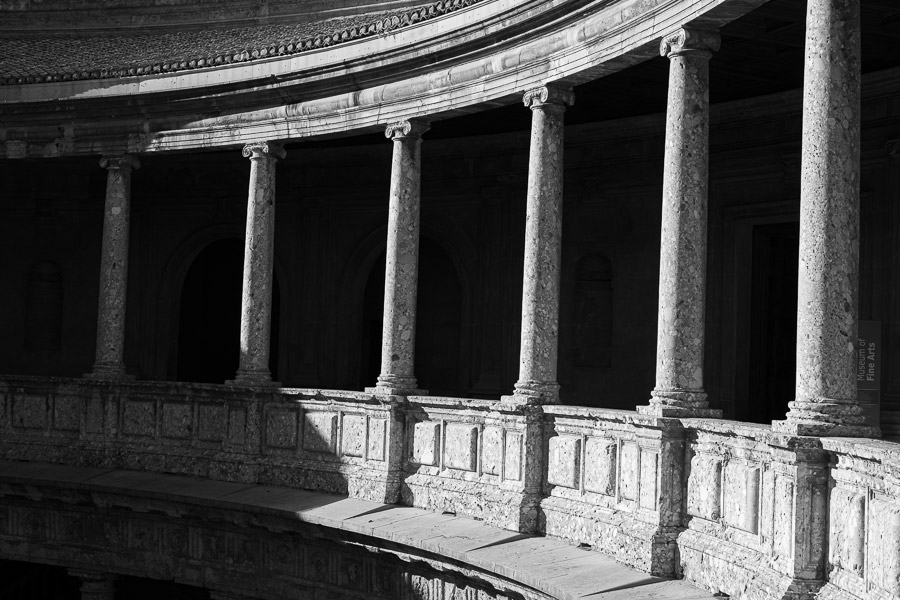 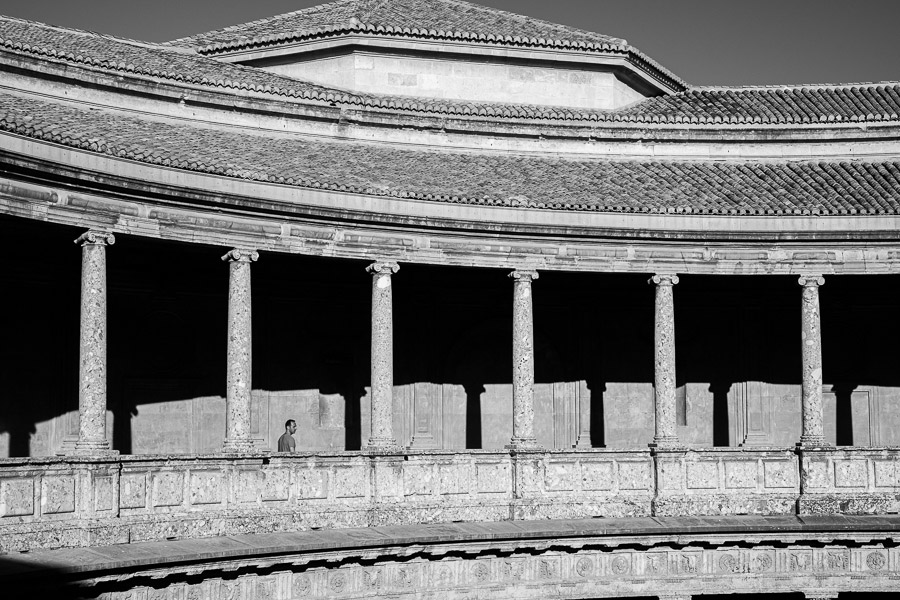 You can apply the same idea to photos made indoors lit by sunlight coming through a window. This creates a natural high contrast scene (and one that doesn’t require you to travel to southern Spain to get).

I made the photo below in an old manor house that has been converted to a museum. The basket of apples is lit by sunlight coming through a small window. The interior of the house was naturally dark, and there isn’t much detail in the background. 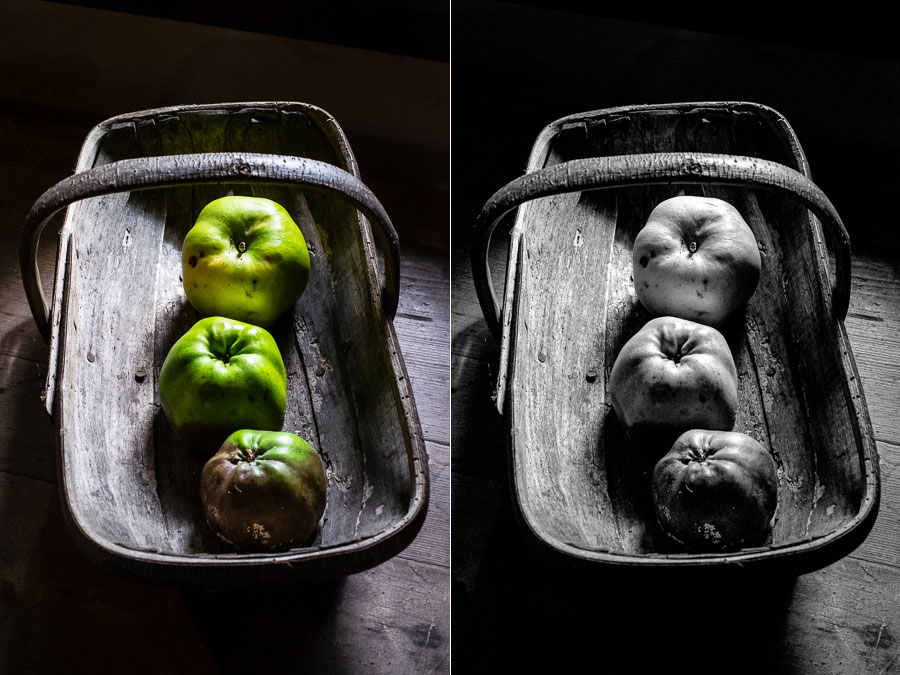 The lighting conditions mean that the part of the scene lit by window light is much brighter than everything else. This is something you can put to creative use to create dramatic photos.

The apples were lit by light coming through a window. The windows were small, so the interior of the room was naturally dark, which is why there is so little detail in the background. It’s a high contrast scene – the area lit by window light is much brighter than the rest of the scene.

It’s also interesting to look at the difference that converting the photo to black and white makes. In color, you have a strong color contrast between the green apples and the gray background. But in black and white the emphasis is on tonal contrast and texture instead.

Here’s another photo also taken indoors. I made sure that there were no overexposed highlights in the photo to ensure that I’d capture all the detail in the brass lamp. As a result the background went dark. As you can see, it also works well in black and white. 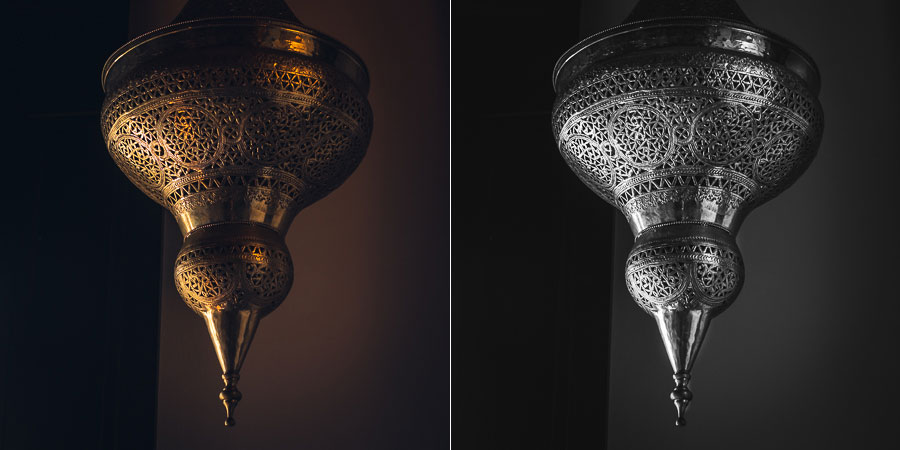 Silhouettes are another way of using shadow that works well when your subject has an interesting shape. In the photo below, I exposed for the sky. The statue and cactus were in shadow, so the difference in brightness means they are silhouetted in the photo. 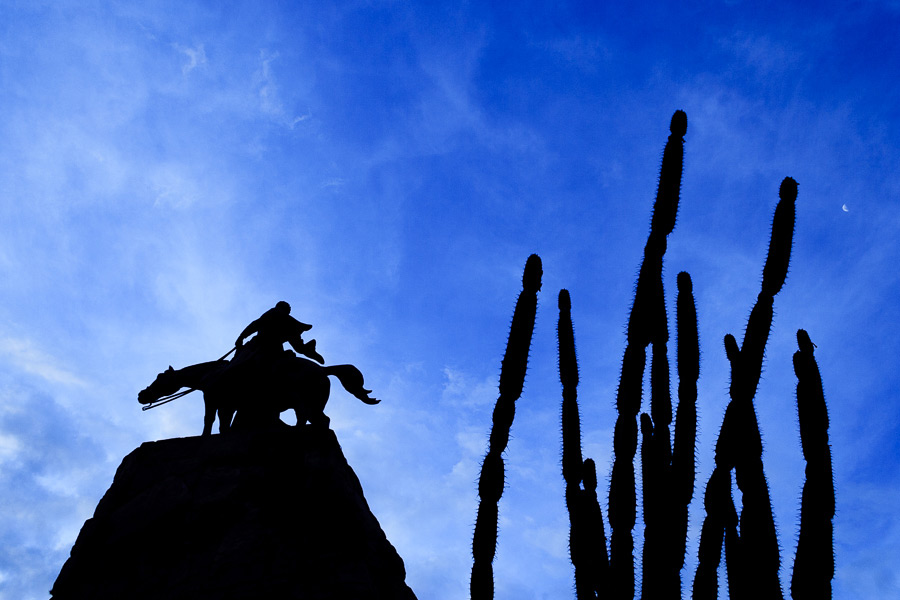 Converting to black and white makes it even more dramatic. 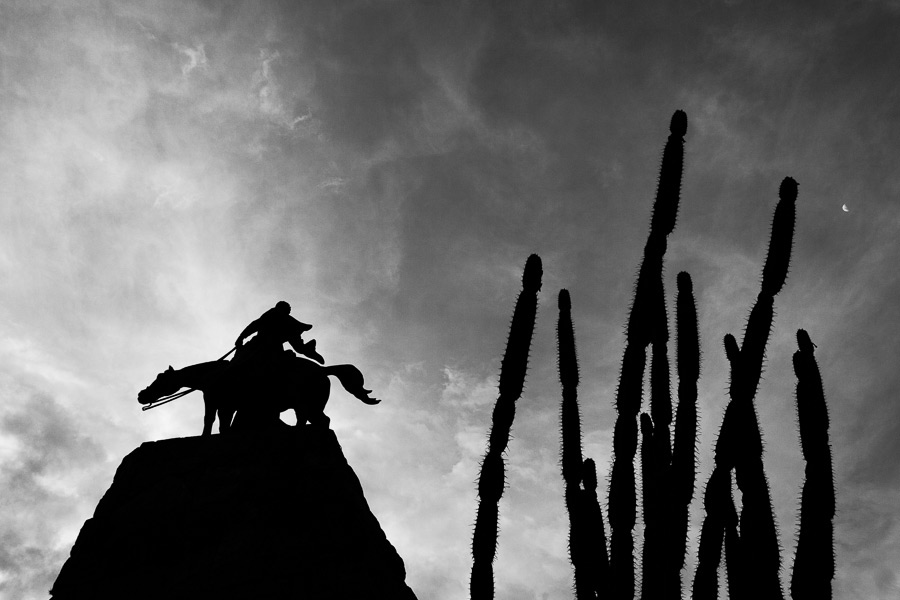 The landscape photo below has lots of shadows as well as a couple of interesting silhouettes. After I had set up the shot two children walked across the beach and climbed onto the rock. A shutter speed of 30 seconds blurred both the water and the silhouetted children. I was lucky because the silhouetted figures add human interest and scale to the scene, creating a natural focal point that pulls the viewer’s eye across the photo. 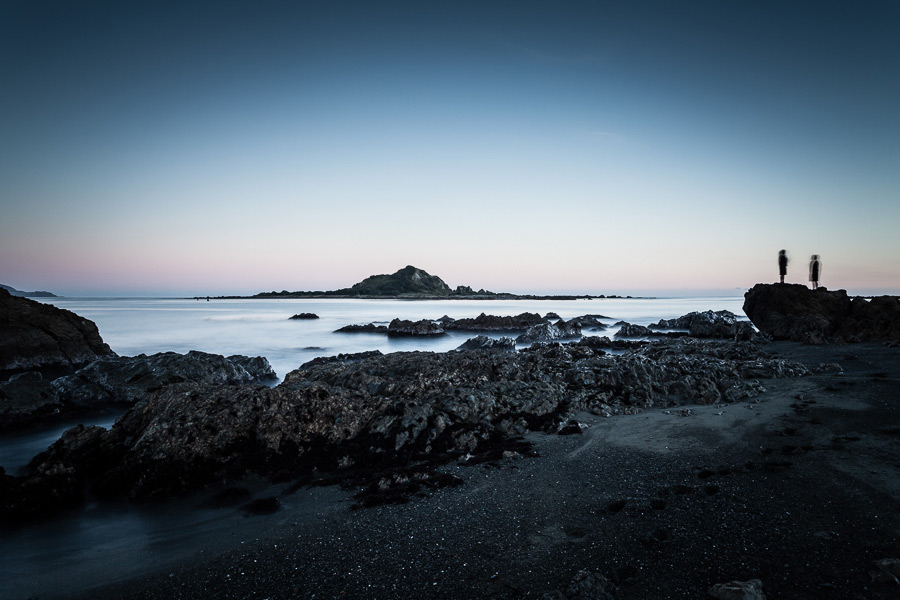 It’s another image that works well in black and white. 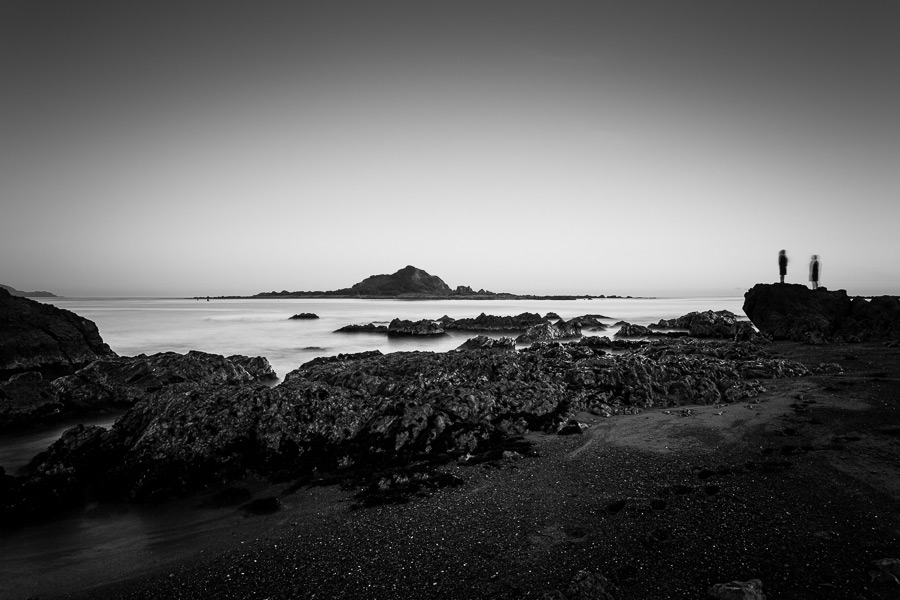 One of the aims of this tutorial is to dispel the idea that it’s essential to capture lots of shadow detail in your photos. It’s not a failure or technical shortcoming if your photos don’t have shadow detail.

In fact, the opposite is true – if your composition skills are good and you understand how to control exposure on your camera you can use high contrast lighting to create dramatic photos like the ones in this tutorial. It’s all about using the interplay of light and shadow to create interesting and dynamic compositions. Don’t show the viewer everything, and leave gaps for their imagination to fill.

My newest course Finding Your Creative Voice is open for enrollment now. Click the link to learn more or enroll.