One of the biggest challenges you face when making black and white landscape photos is understanding how a scene you see in color will come out in black and white.

Back when I started in photography, using film, you had to make a judgement about whether a photo would work in black and white without any feedback. You had to wait until you had developed the film and made a contact sheet made to see whether it worked.

Now, feedback is instant. Just set your digital camera to its monochrome mode, and use the Raw format. You will see your images in black and white when you play them back. Yet as you used Raw you still have all the color information if you want to use it.

Cameras with electronic viewfinders are even more versatile because they give you a black and white display in the viewfinder. This makes visualization much easier as you don’t have to guess how the photo will come out. Your camera just tells you.

If your camera has Live View (and most modern dSLRs do) you can also use it to see the scene in black and white. This is useful when you have the camera mounted on a tripod, which is normal for landscape photography.

Now let’s look at the ways you can improve the composition of your black and white landscape photos. 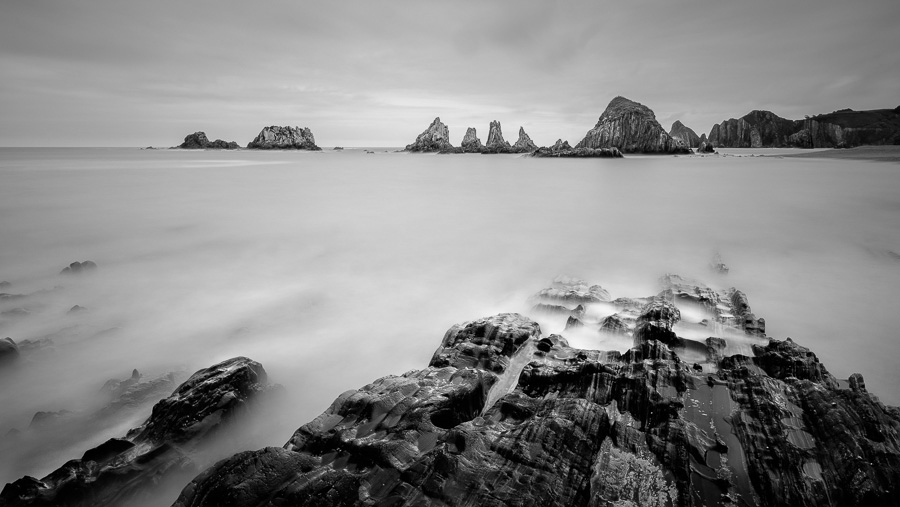 1. Use the camera technology to see in black and white

The technology has advanced, but the elements that make up a good black and white image haven’t changed since Ansel Adams wandered the American west with his view camera. You still have to train your eye to see in black and white.

You might say that the ability of a digital camera to capture a full color file (when you shoot Raw) is a big advantage of digital, and you’d be right.

But consider this – if you use a film camera with black and white film then you are committed to the black and white image. It puts you in a mindset where you have to create images that work well in monochrome. It forces you to ignore color and look at tonal contrast, line, shape and texture instead.

Try and replicate that mindset. Set your camera to monochrome. Think in black and white, and forget about the fact that your camera is capturing full color files.

It’s the same with black and white photography. You need to learn to think in the language of monochrome.

For example, with the camera set to monochrome, I could see that the white horse in this landscape photo stood out from the background. I didn’t have to think about it, I could just see it, and start searching for the best composition right away. That’s the benefit of working in monochrome mode. 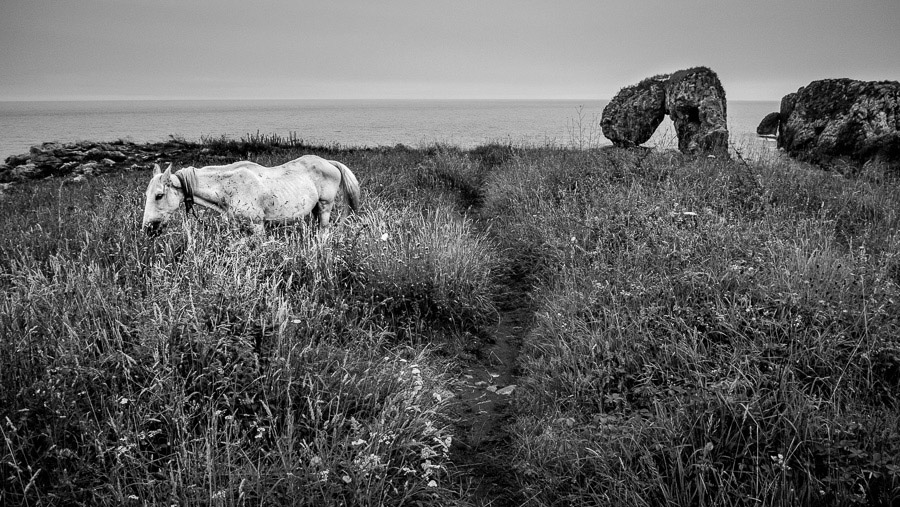 2. Understand how light works in black and white landscape photography

Using black and white for landscape photography gives you lots of creative freedom. It’s not so important to be on location during the golden hour or dusk. But it helps if you are. The quality of light at this time of day is hard to beat. Always try to get there if you can.

Working in black and white extends the hours in which you work productively. The golden hour is your prime time for creating landscape photos. But, depending on subject, you can also work during the day in harsher light or on cloudy days. But you may not work in color because the quality of the light isn’t good enough.

Seeing in black and white is about learning to see the shapes, patterns and textures that occur in the natural world and arrange the composition to suit them.

That’s one of the reasons why this photo that I made in Granada, Spain, works. 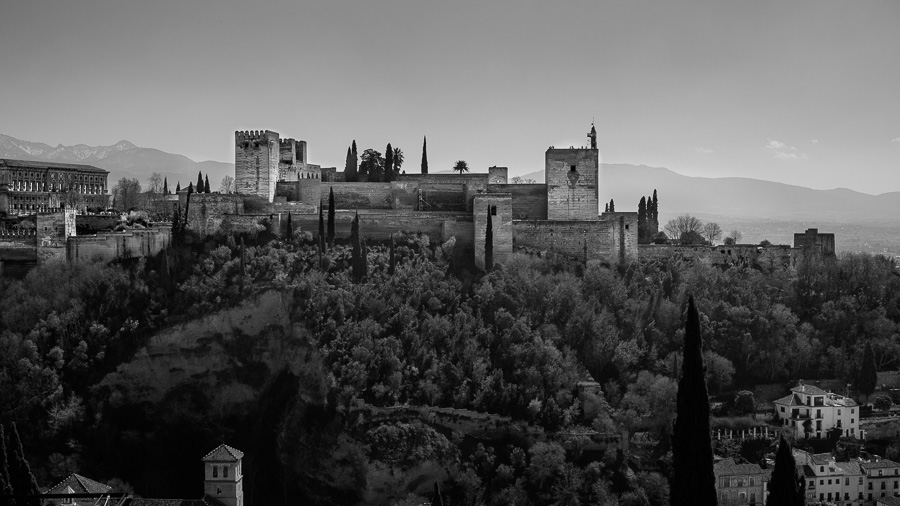 The southern Spanish sun was strong and the landscape was slightly backlit. But the textures and shapes are interesting and make a strong composition in black and white.

It would be interesting to be on location at sunset with the sun shining on the Alhambra palace, and hopefully one day I will get chance to do that.

Learn more: How to Use Texture to Make Better Black & White Photos

3. Use tonal contrast in your black and white landscape photos

Another important element is tonal contrast. It’s a simple enough compositional device to photograph a light object against a dark background, and it works particularly well in black and white. The interplay of light tones against dark tones is what black and white photography is all about (don’t forget those subtle mid-grays either).

We’ve already see that the photo above of a horse in a field has strong tonal contrast. Your eye goes to the horse because it’s white and the tones around it are gray.

This landscape photo has an interesting tonal contrast between the light sky, the gray sea and the darker jetty. 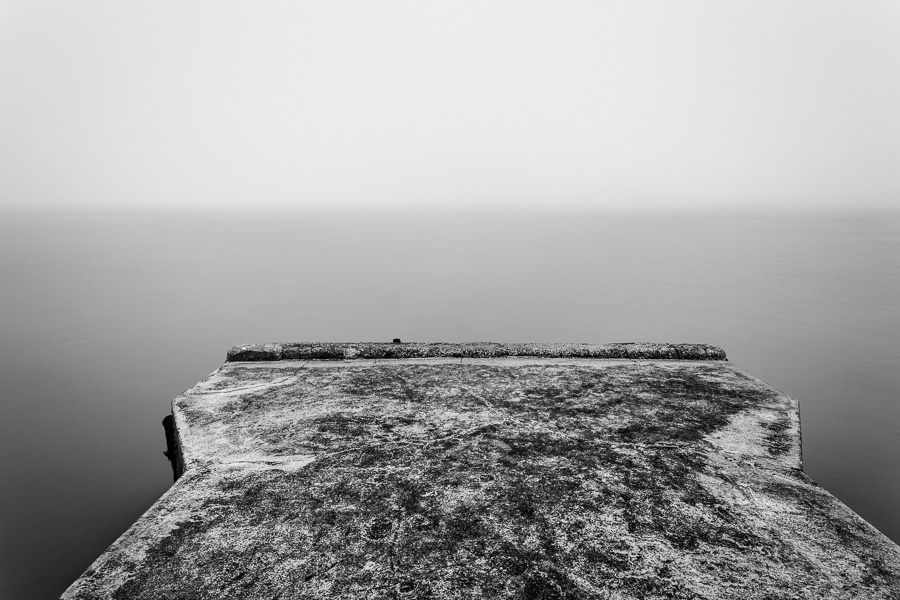 But other factors are at play. The concrete jetty forms a strong shape and has lots of texture. The texture of the concrete contrasts with the smooth sea and featureless sky (the photo was taken in fog). All these things come together to create a strong composition. They support each other. None of them work in isolation.

Line is another compositional tool that you should look to use whenever you can. Given that most landscape photographs are taken with wide-angle lenses, there is lots of potential for finding and using lines, both curved and straight, to take the viewer’s eye through the photo from the foreground to the horizon.

Lines are not always obvious. Can you see the lines in this photo? 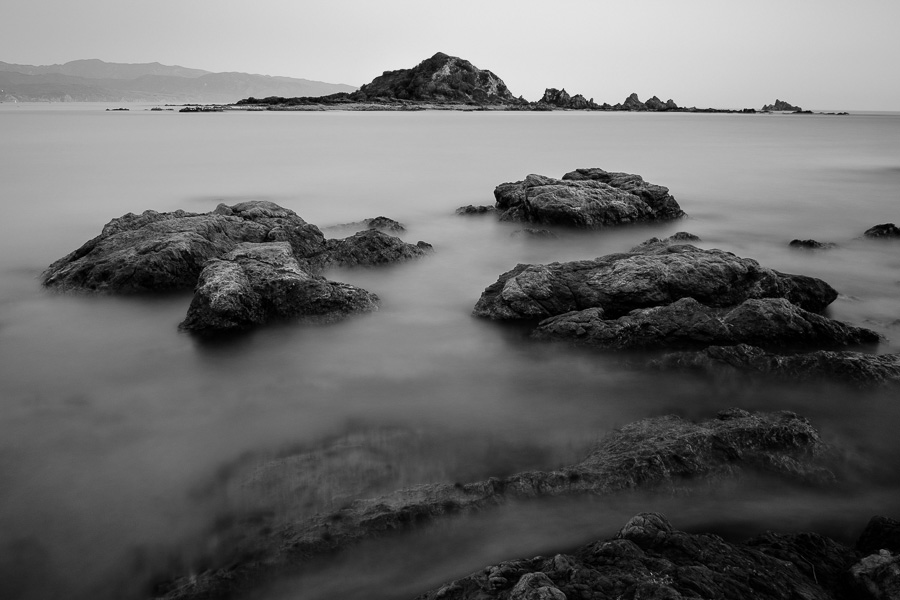 I’ve marked them in red so you can see what I mean. 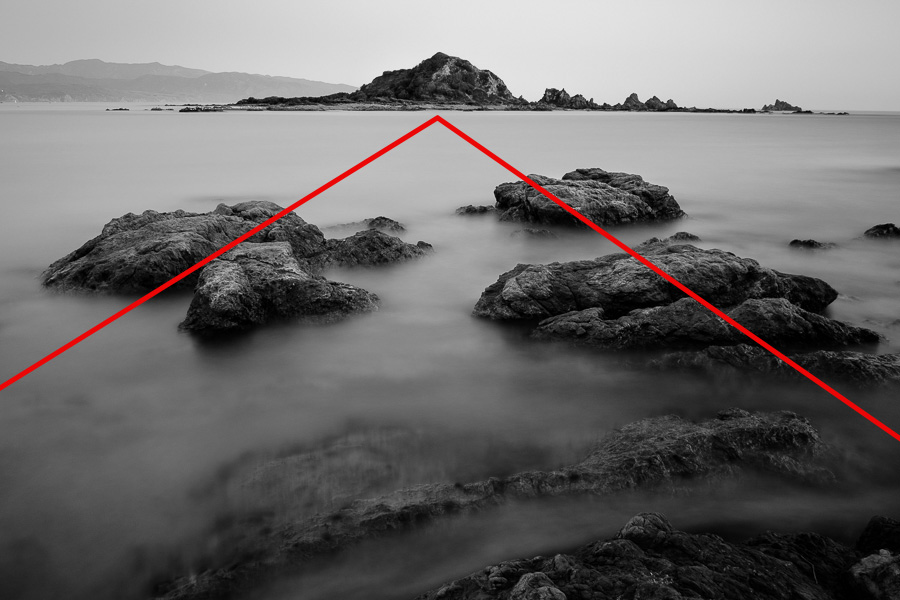 The rocks make a line that takes the eye through to the island on the horizon. The structure of the rocks is triangular, and so is the island, so you have the idea of repetition of shape. You have contrast between the textured rocks and the smooth sea.

And then there’s the tonal contrast between the different areas of the scene (sky, distant hills, the island, the rocks in the foreground, the sea) that helps the eye distinguish between those areas.

Again, there’s a number of interesting things going on that come together to create a strong composition.

You should also think about balance. Most landscape photos try to capture the peace and harmony of the natural landscape. You need to make sure that the elements you have included in the frame are well-balanced to express that sense of serenity.

This photo of the Wanaka Tree (New Zealand photographers will know what I’m talking about) is a good example of balance. The semi-silhouetted tree is balanced by the surrounding grey tones. The horizontal frame and simplified composition emphasize the peacefulness of the scene. There’s not a lot to distract the eye. 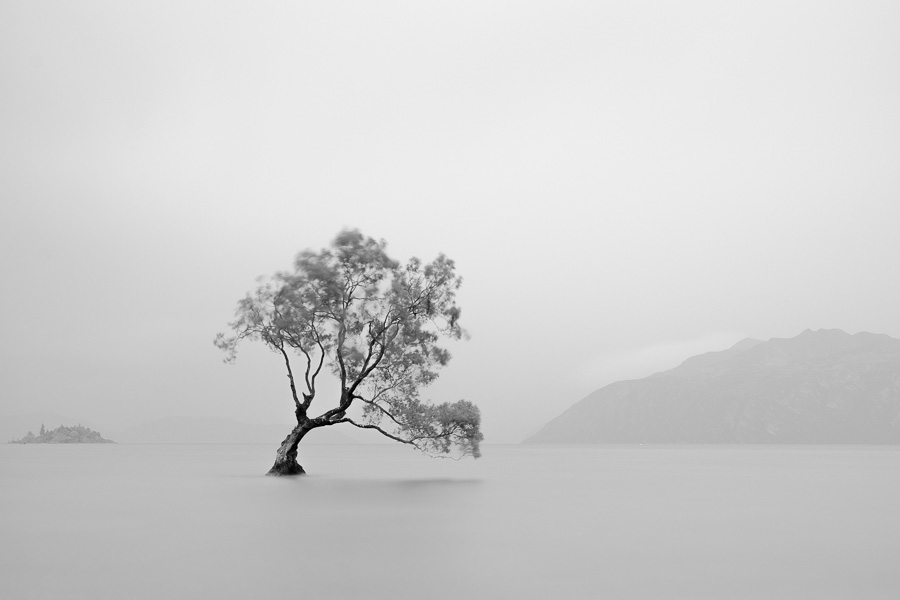 I made the photo in the rain. The rain obscured the mountains behind the tree, simplifying the composition and making it stronger. It also had the benefit of encouraging the other photographers at the scene to leave, so I could pick the best spot to take the photo from. And all I needed to make this happen was an umbrella to hold over the camera to keep it dry.

6. Include some foreground interest

Most landscape photos are taken with wide-angle lenses. That lets you include something interesting in the foreground that helps take the eye through the photo. The photo above with the rocks is a good example.

Learn more: How to Add Foreground Interest to Make Your Landscape Photos Better

Here’s another one. I made this photo in Asturias, Spain. I included the flowers in the foreground so that there was something more interesting to look at than bare rock. It also helps create a sense of depth as the eye moves from the foreground to the cliff and back again. 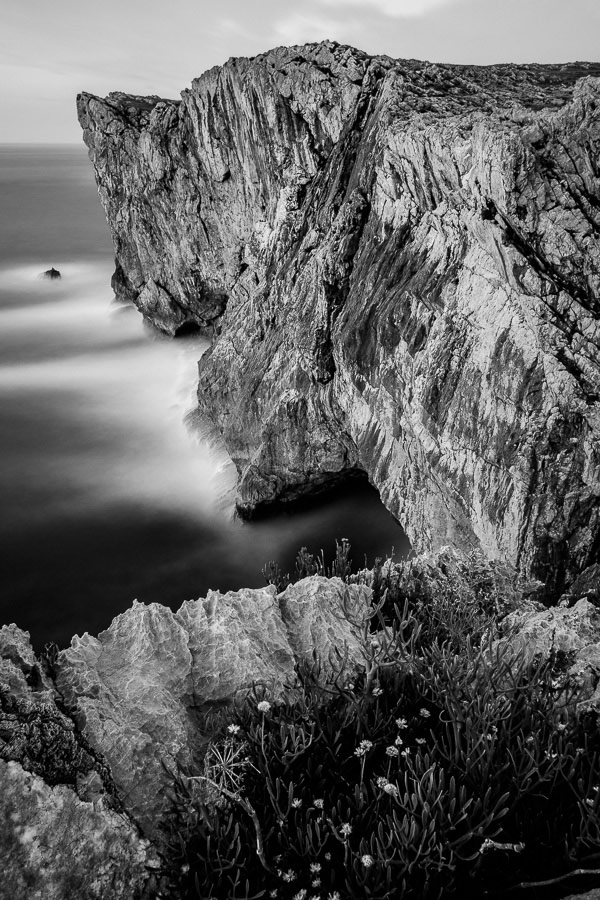 If there’s one concept that links the previous ones together it’s that of simplicity. The more you work with simple compositions (often harder than it looks, especially with wide-angle lenses) then the easier it becomes to see shape, pattern and texture, to understand the relationship between tones, to use line to guide the viewer through the landscape, and to see whether the photo is balanced or not.

Here’s a landscape photo that I made in Cantabria, Spain. The composition is simple. It is clear that the rock stacks are the focal point of the image. They have interesting shapes. There is contrast between the textured rock stacks and the smooth sea. Including the horizon creates a sense of distance and space. All these factors come together to create a strong composition.

Learning to see in black and white is a skill that’s easy to learn once you become aware of the some of the building blocks of composition.

I like working in black and white and viewing the world in monochrome through my camera’s electronic viewfinder. Removing color makes it easier to see line, shape, tonal contrast and texture – the important elements you need to learn to use to create strongly composed black and white landscape photos.

Follow the seven tips in this article and I guarantee that your black and white landscape photos will be stronger.