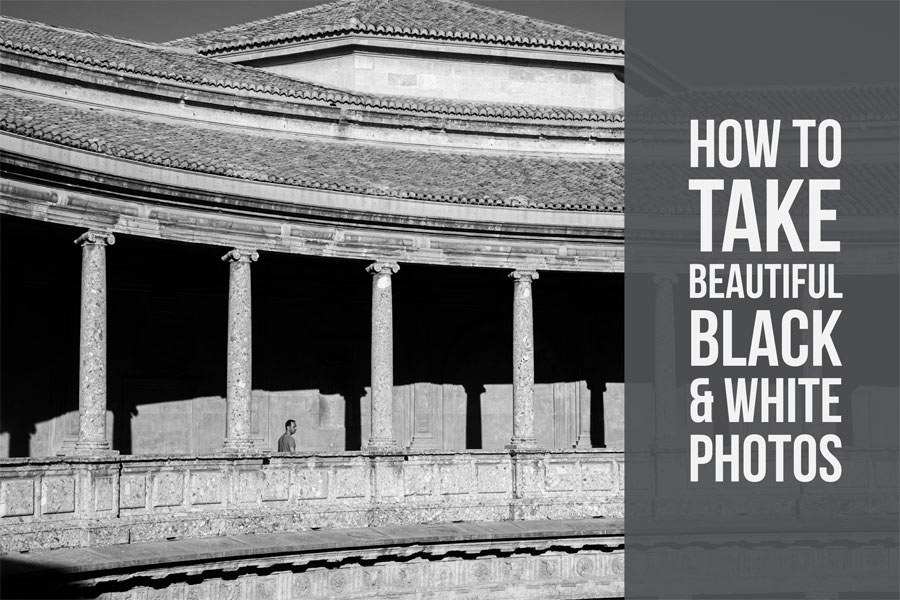 You might be tempted to think that beautiful black and white photos are made in Lightroom Classic, Photoshop, Luminar or Silver Efex Pro. In other words, that it’s down to the software as much as the photographer.

But the truth is that the best black and white photos are made by the photographer, at the point when they press the camera’s shutter. That’s because, in order to make beautiful monochrome images, you have to learn how to see and compose in black and white.

It doesn’t matter how creative or clever you are in the digital darkroom. If your composition is poor, or you choose a subject that doesn’t work in black and white, then you’re going to struggle to create good monochrome photos.

The best way to learn is through examples, so I thought I’d show you some of my favorite black and white photos along with a helpful analysis of the factors that make each one work. 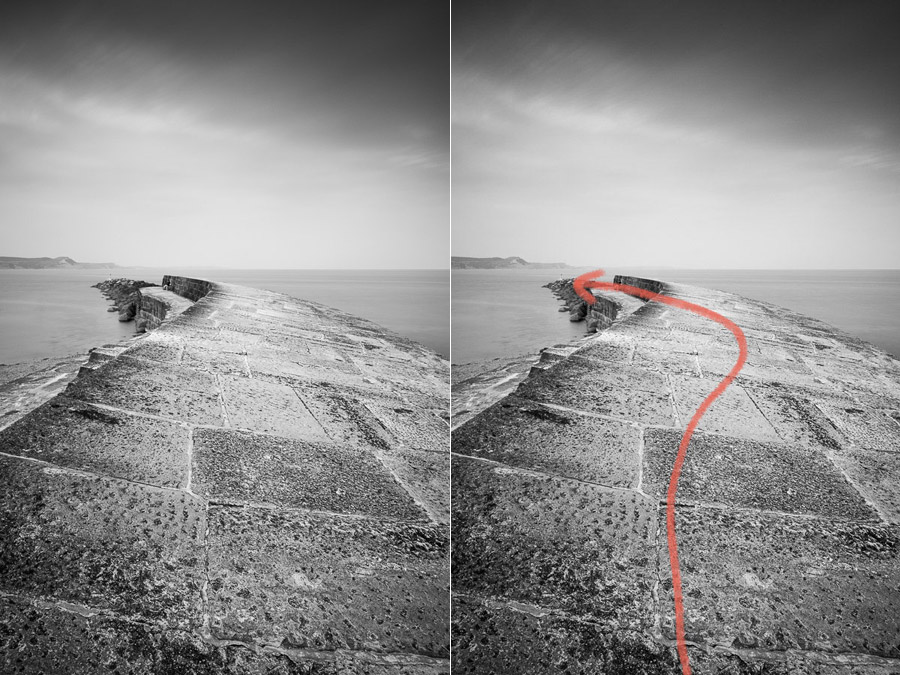 I made this photo on the Cobb, the harbor wall in the town of Lyme Regis in southern England. It’s a popular spot for landscape photographers, and as a result it’s a little difficult to come up with something that looks different from other photos you might see.

I framed the photo in this way because I liked the way the curved line of the Cobb leads the eye through the frame to the distant cliffs. I used a neutral density filter to obtain a shutter speed of 58 seconds, with the intention of blurring the sea and the clouds.

Line: The S curve of the Cobb leads the eye through the frame to the cliffs in the distance. The choice of a vertical frame forces the eye to follow the line.

Wide-angle lens: The use of a wide-angle lens (14mm on an APS-C camera) emphasizes the sense of space in the photo and makes the harbor wall seem longer than it really is.

Texture: The rough textures of the stones contrast with the smoother textures of the sea and clouds. This is one of the benefits of using a neutral density filter. A shorter shutter speed would have resulted in an image with more texture in the water. 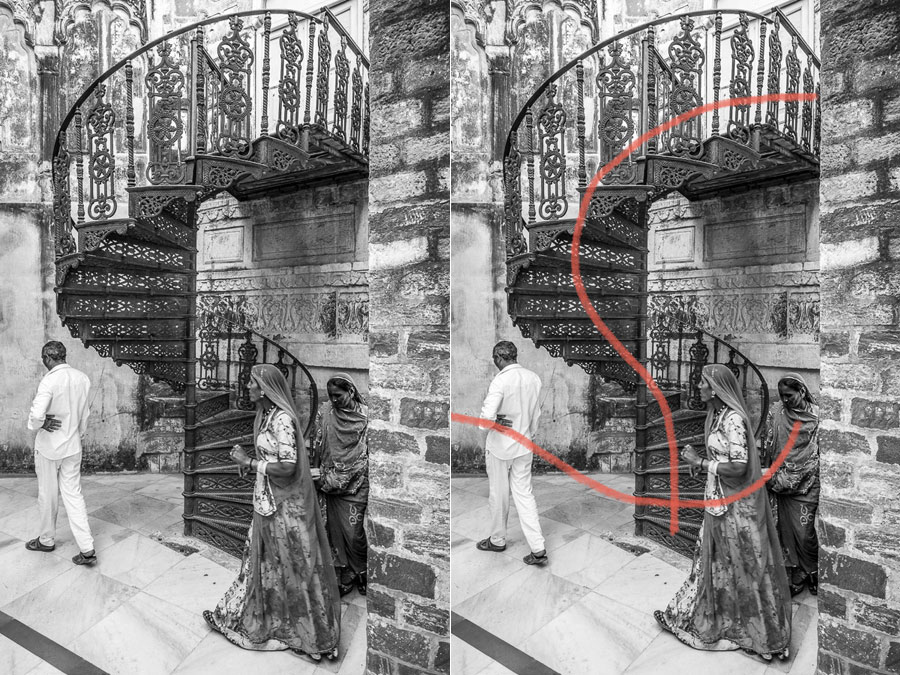 As I walked through the Mehrangarh Fort I saw this spiral staircase and knew that it would look good in a black and white photo. It made an interesting subject by itself, but I wanted some human interest. I stood to the side and made a series of photos as people walked into the frame. This one worked the best because the three people make a curved line that echoes the shape of the staircase.

Curved lines: The three people in the photo make a curved line that’s almost a continuation of the one made by the stairs. The line leads the eye from the right of the frame and out through the left.

Gesture: The man dressed in white has an interesting gesture with his hand resting on his hip at an unusual angle.

Subject separation: The same man is in an empty part of the frame. If I’d taken the photo a few seconds before the top of his head would have overlapped the staircase and the composition wouldn’t have been as effective. This is all about timing – recognizing the moment and pressing the shutter at the right time. 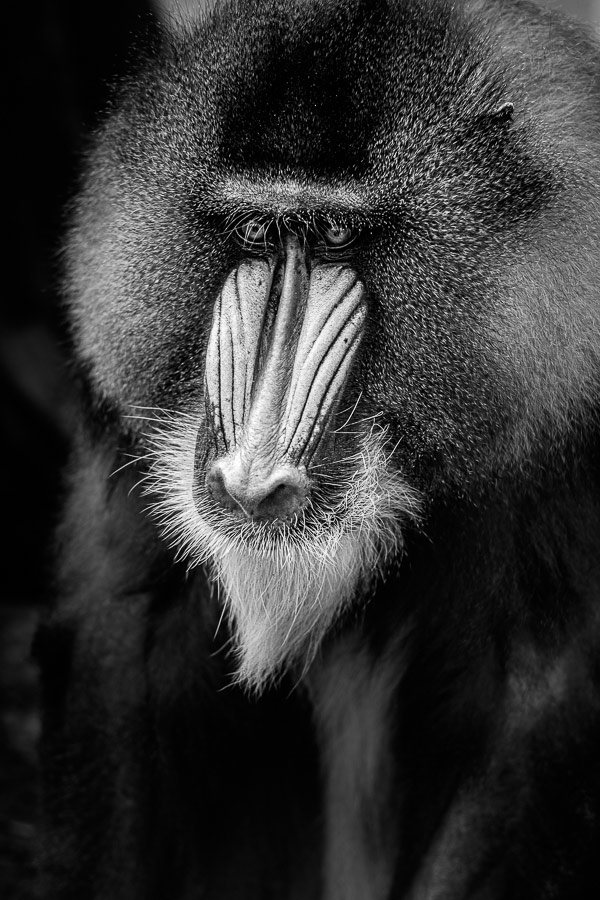 I photographed this mandrill in a zoo in much the same way as I would make a portrait of a human – with a short telephoto lens and focused on his eyes. The animal’s thoughtful expression turns this photo into an interesting portrait.

Tonal contrast: The mandrill’s nose and whiskers are much lighter than the rest of his fur (this is partly down to the developing as I made those tones lighter in Lightroom Classic).

Texture: The fur, nose and whiskers are all beautifully textured, giving the photo a tactile quality. 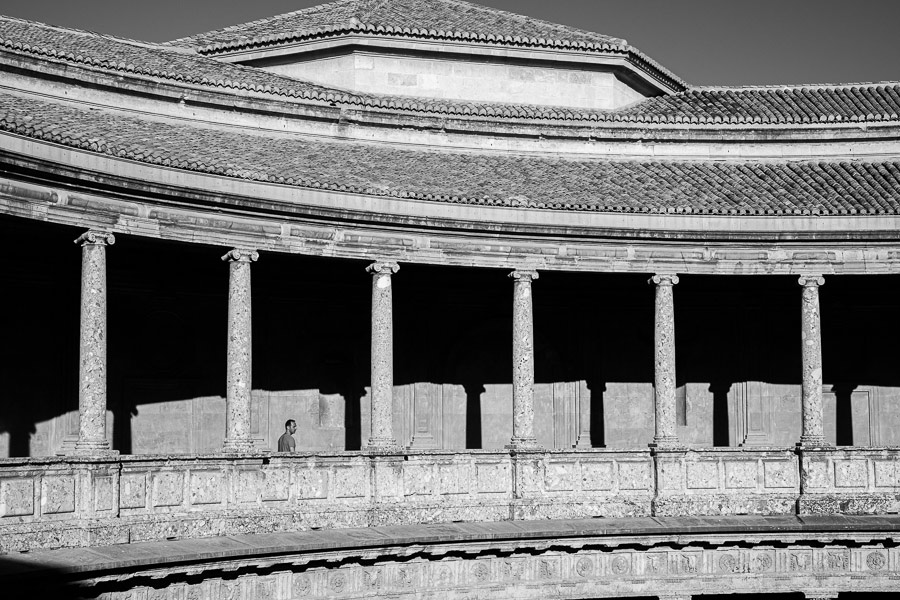 The afternoon sun cast interesting shadows across this building in the ancient Moorish palace the Alhambra in Granada. Just like the earlier photo made in the Mehrangarh Fort I waited until somebody walked into the frame to add interest.

Punctuation: The man provides a punctuation point, an additional point of interest that makes the photo more interesting than the same image without him there.

Strong structure: The curved horizontal lines of the building linked by the vertical pillars gives the photo structure. Structure (and geometric shape) are common features in man-made objects like buildings that you can utilize in your compositions. 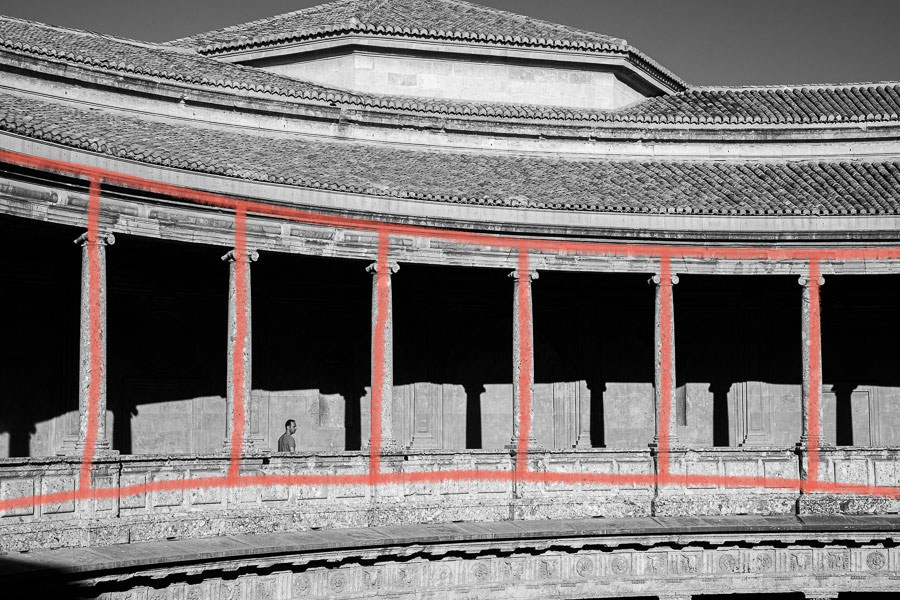 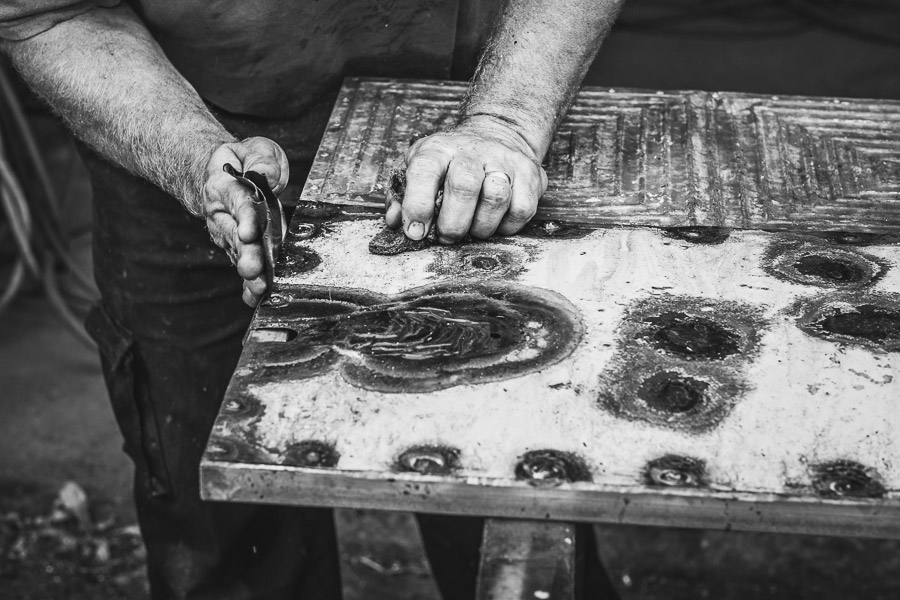 This is one of a series of photos I made of artist Chris Meek at his workshop. I deliberately closed in on his hands as he sanded the metal piece of artwork he was working on.

Texture: The scene contains a variety of interesting textures emphasized by the black and white treatment.

Analyzing these photos is a simple exercise. But it reveals several elements that work well in most black and white photos. These include texture, line, shape, pattern and tonal contrast. Plus something that’s present in all these photos but not mentioned – simple composition. You know you have the potential for a great black and white photo when all these elements come together. 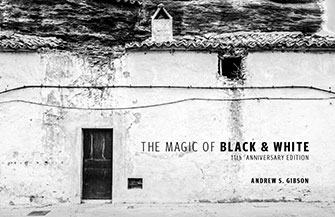 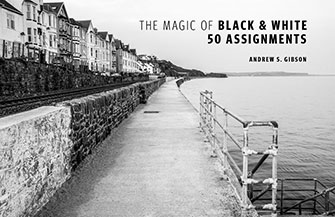 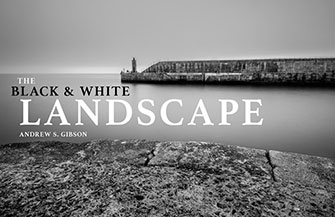