One of the ideas I wrote about in my ebook The Candid Portrait is finding a rich environment for travel and street photography. This came about because I realized that the setting in a travel photo is just as an important part of the story as the people.

Last week I saw a play – an amateur production of Ring Round the Moon. The action takes place in a single room. The setting remained constant, but the characters came and went as the play progressed.

Travel photography is similar. If you can find a beautiful setting, then it’s a matter of waiting, observing and seeing what interesting characters come onto the stage.

This happened to me in Beijing during my last trip to China. Beijing has a lot of historical buildings, like the Forbidden City and the Summer Palace.

One of the places we visited was Prince Gong’s Mansion, a complex of buildings, gardens and temples. One of the temples had Tibetan style prayer wheels on one side of an open courtyard. I noticed that as people passed through the courtyard they walked alongside the prayer wheels, spinning them as they went.

That side of the courtyard was in shade (it was a hot summer’s day) and I waited, watched the people go by, and took some photos. I had found my theatre, and all I had to do was wait for the characters to walk on the stage.

These are some of the photos I made that afternoon. 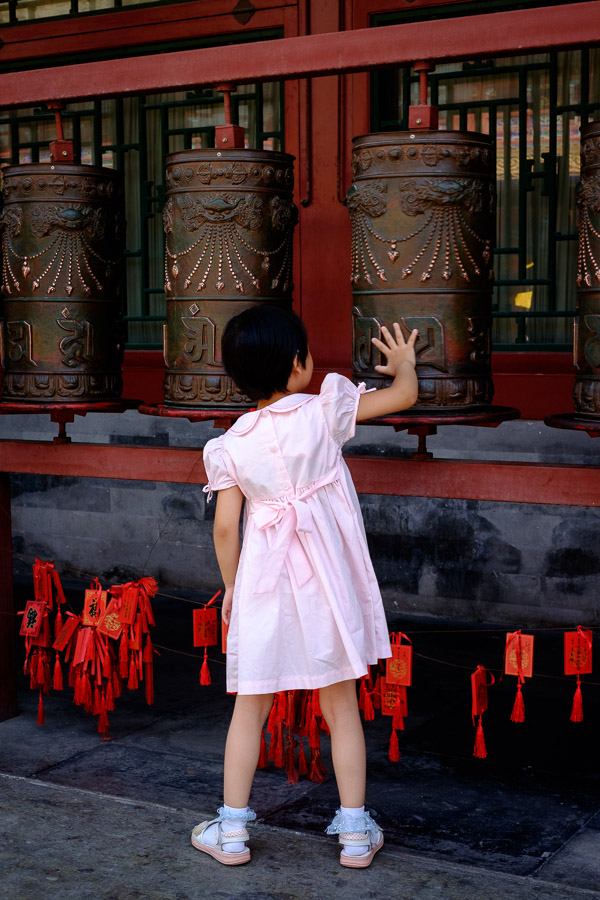 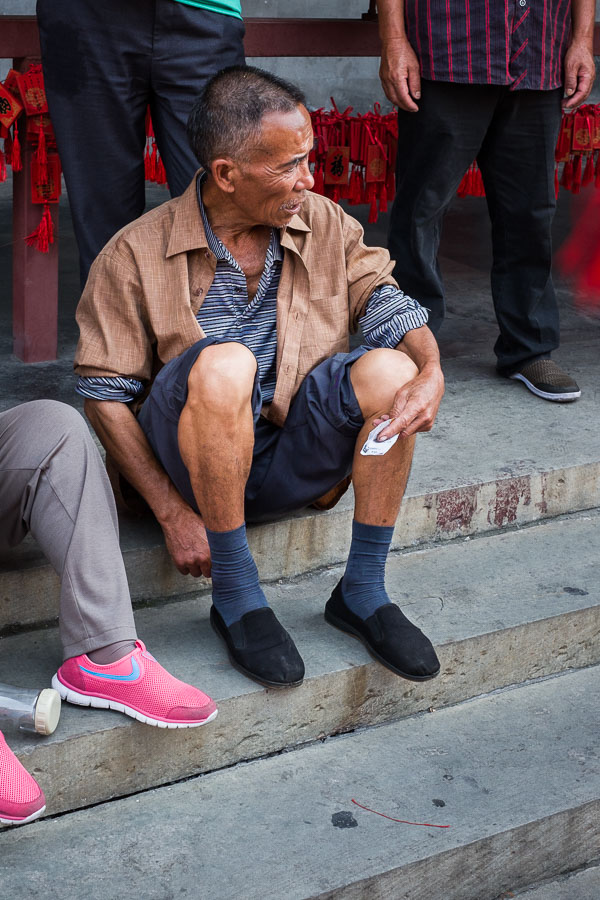 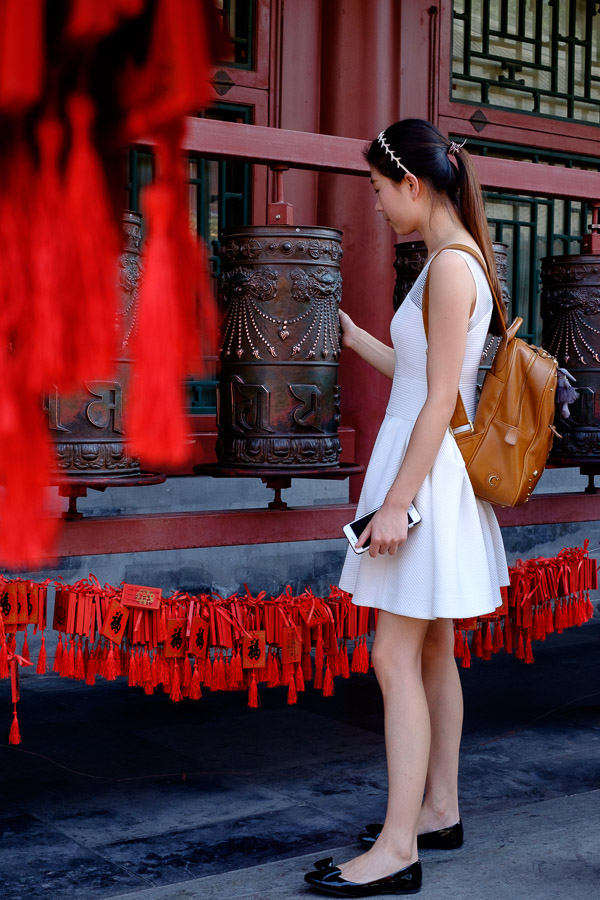 There were other theaters for street photography in Beijing too. The Forbidden City, the Summer Palace, the Temple of Heaven and Jingshan Park were all wonderful places to take photos. These historical locations appealed to me much more than the modern parts of the city, and I was fascinated by the way that people came to see the city’s historical sites, and how they interacted with them.

At the Temple of Heaven I came across couples having wedding photos taken (a shoot that takes place after the wedding itself). 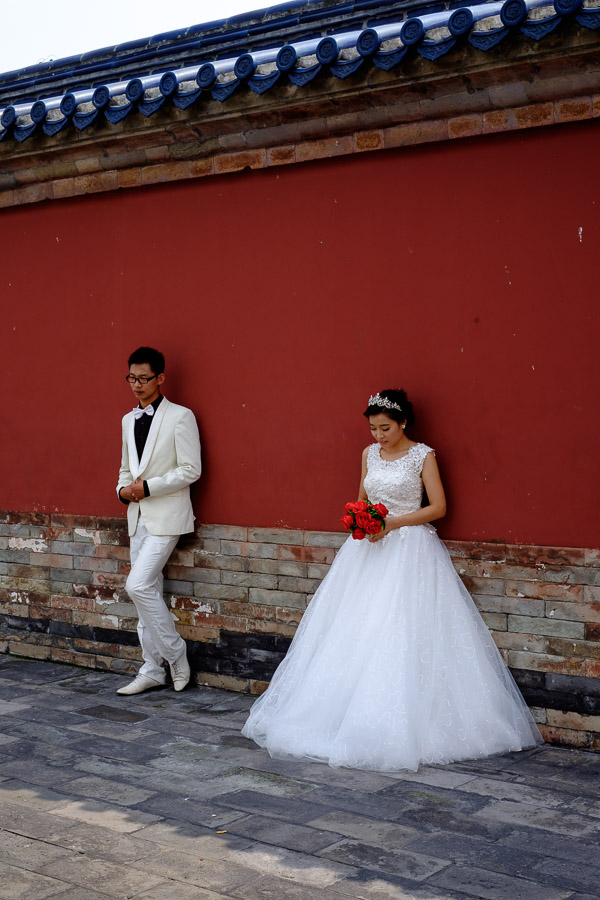 In Xi’an, the ancient capital of China located at the eastern end of the Silk Road, the Muslim Quarter was another rich environment for street photography. There were old buildings, narrow streets, and lots of food stalls. 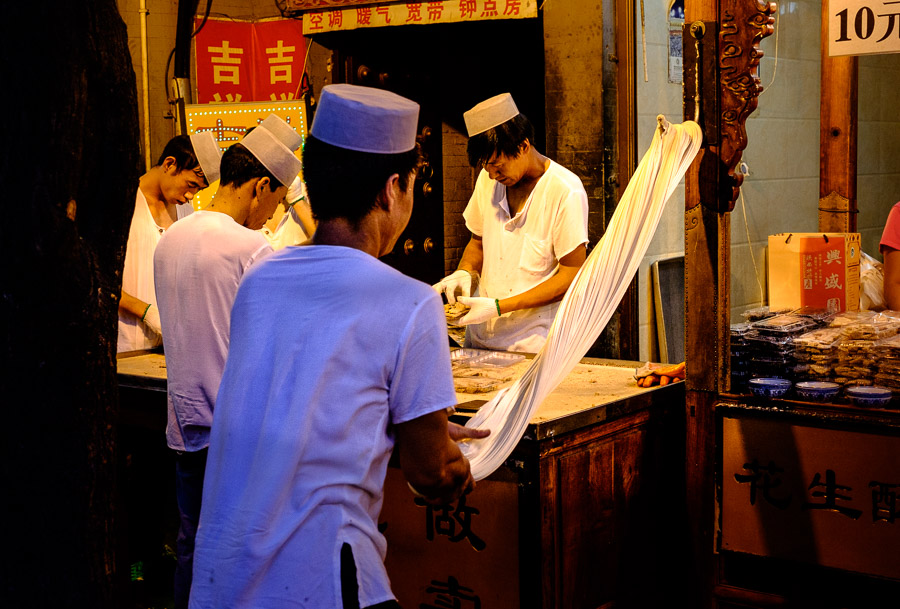 In Hangzhou, the temples in the mountain forests surrounding the city were also wonderful places to explore and take photos of people. It rained a lot, and was hot and humid the entire time we were there – we never saw the sun. But this just added to the jungle like atmosphere. 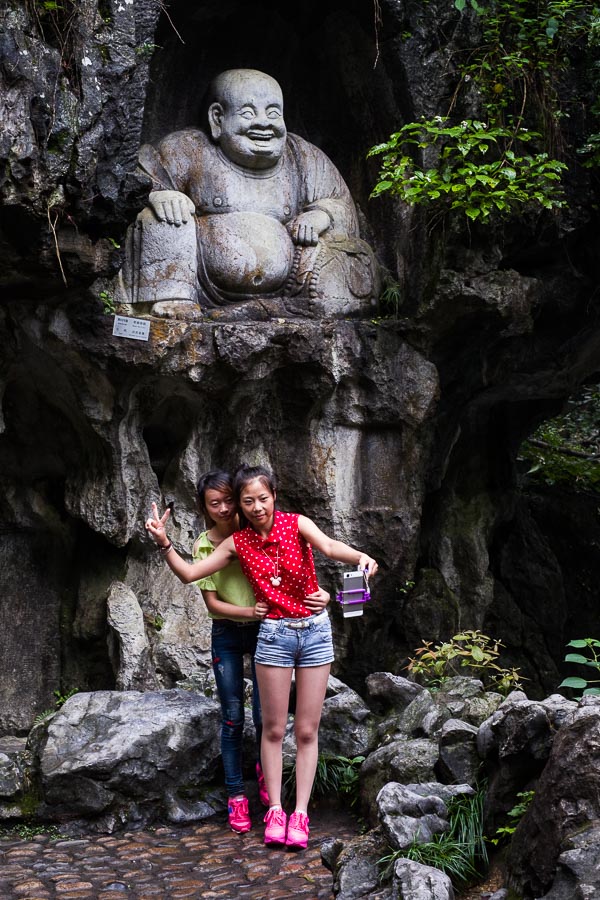 In Cadiz, Spain we visited the city during Carnival a few years ago. The city was filled with people in costume, and with street performers and singers who had spent most of the previous year preparing for their performances. It was like the entire city had become a theater – all I had to do was turn up with my camera and decide what to take photos of. 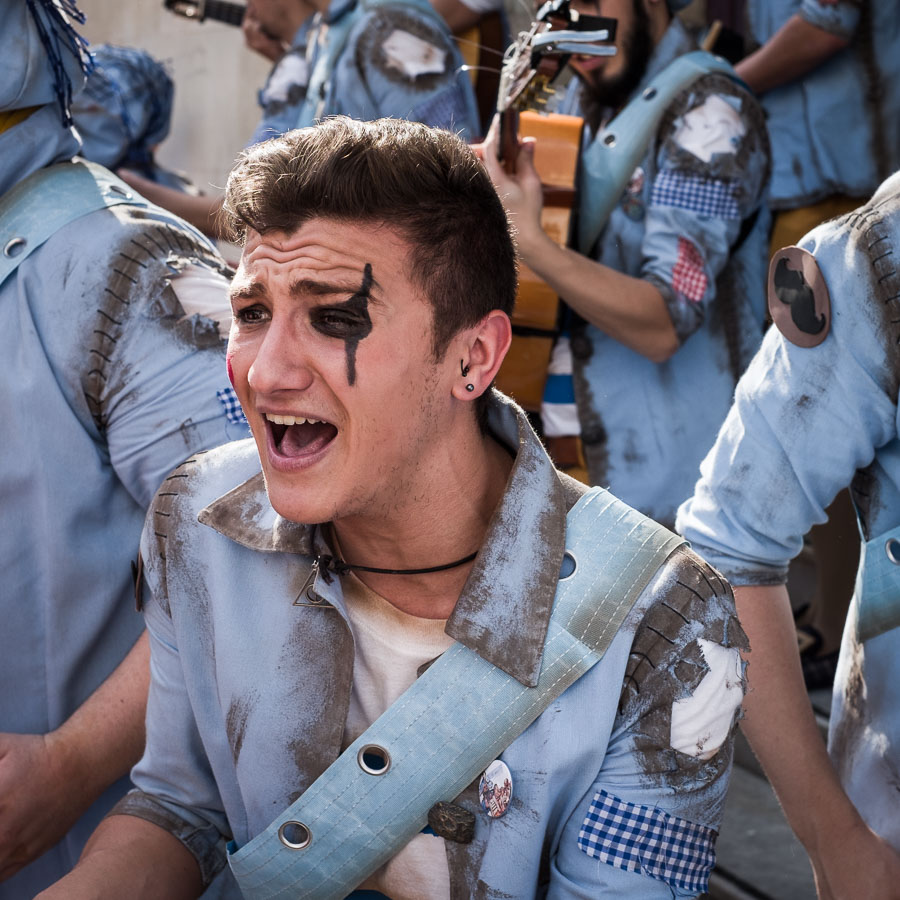 In Delhi, India, the narrow passageways of the old city made their own rich environment for travel photography. 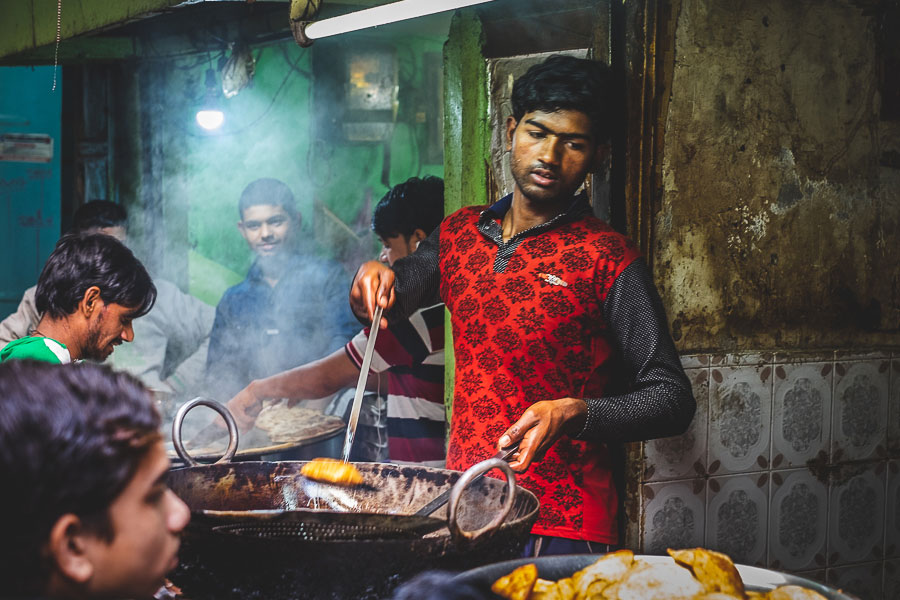 Using assignments to find a focus

Another approach is to use the assignments in my books 100 Creative Photography Assignments and The Magic of Black & White: 50 Assignments to give yourself creative briefs that you can follow.

For example, the assignment On the outside (Assignment 31 in 100 Creative Photography Assignments) is an assignment that asks you to make photos of things you see outside people’s houses. It could result in photos like these, made in Burano, an island near Venice in Italy: 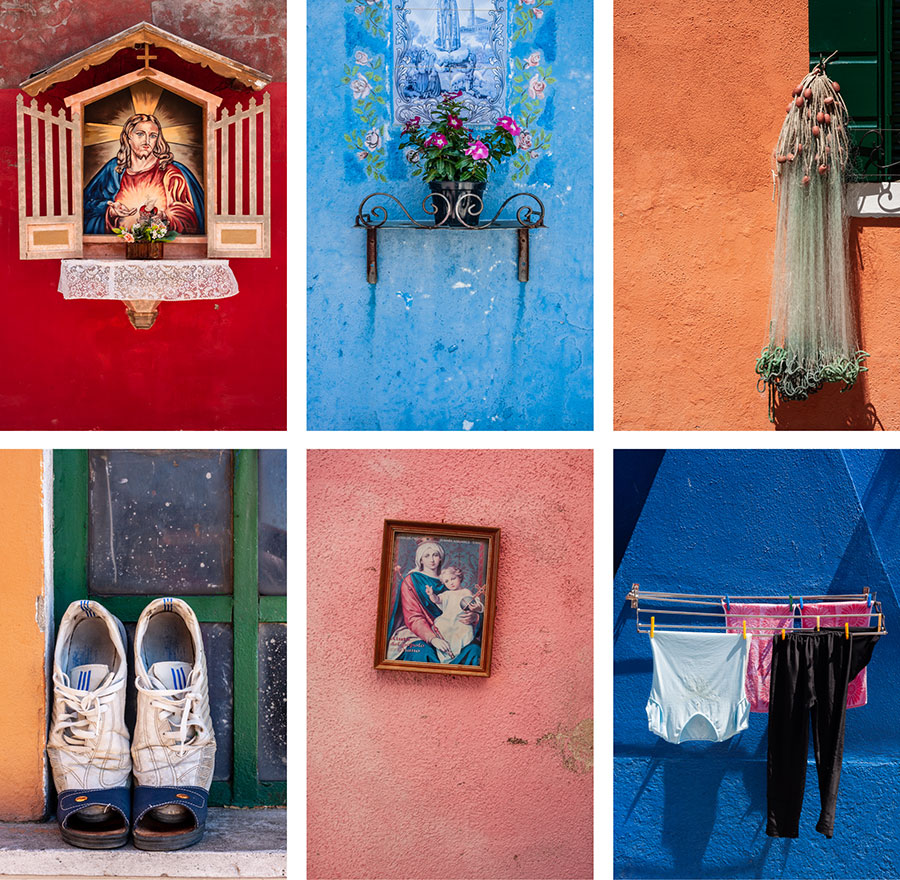 Or these, made in Alaska: 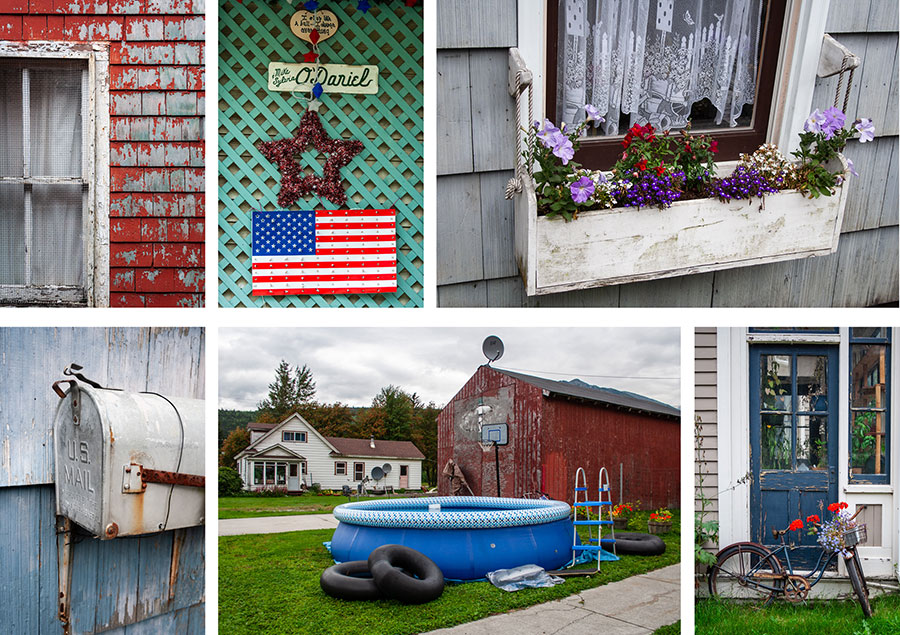 Or these, made in Martha’s Vineyard (an island off the coast of Massachusetts in the United States):

Or these, made in my home town of Dawlish in the UK. 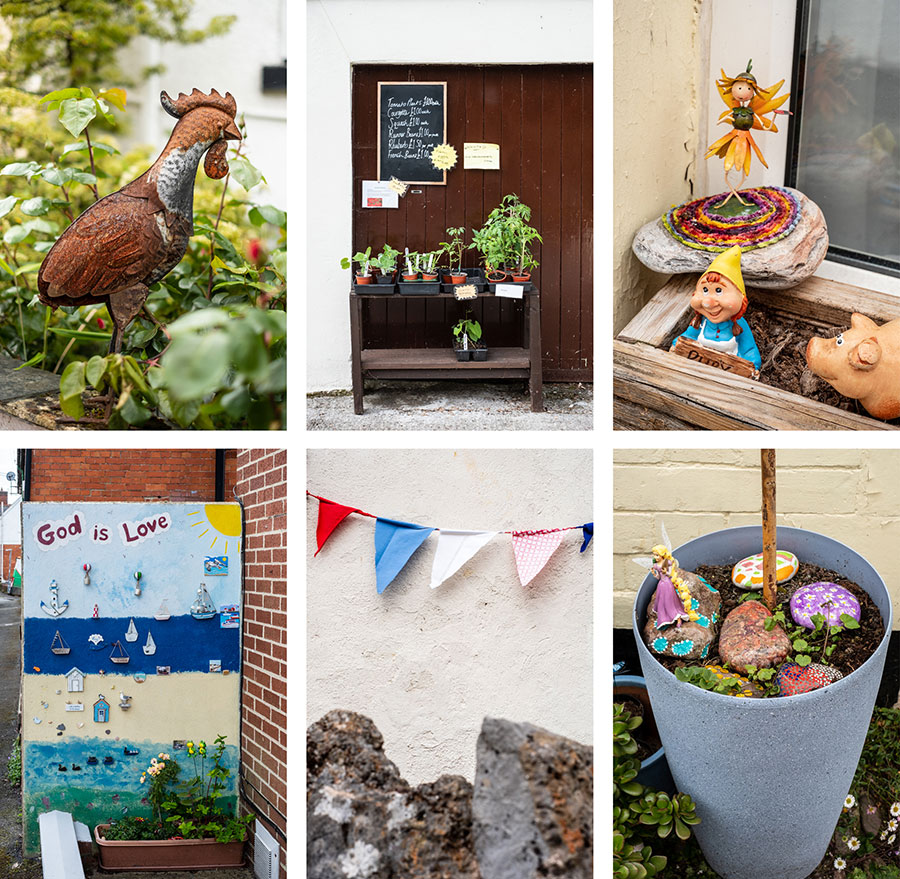 Following a brief like this is more productive than wandering around with a camera making photos of things that catch your eye. And, just like making photos of people, they encourage you to find a rich environment to make photos in.

One of the biggest fears or worries that people have when it comes to making photos of people for travel photography is how will people react when you take their photo?

There’s no easy answer to this as it depends on where you are taking photos. You can make it easy for yourself by going somewhere people expect to have their photos taken (at public events like Carnival in Cadiz, for example), or to somewhere the people tend to ignore people with cameras (China was like this).

I prefer to use a small camera (I use Fujifilm X series cameras) as this is more discreet than a larger SLR. I use small primes like the 35mm f1.4 and 23mm f2 lenses.

Another benefit of small cameras is that you can carry them around for much longer without getting tired. Managing your energy levels (making sure you eat and drink enough, and take regular breaks) is the key to stamina while traveling, and the weight of your gear is a major factor in this.

Another helpful tip is not to make eye contact with the people you want to photograph. Be an observer, but don’t look directly at anybody.

Pretend to take a photo of what is behind them instead. One trick is to leave the camera at your eye once you have taken the photo, as if you are waiting for the people in the frame to move out of the way. The smaller your camera, the less likely they are to take any notice of you.