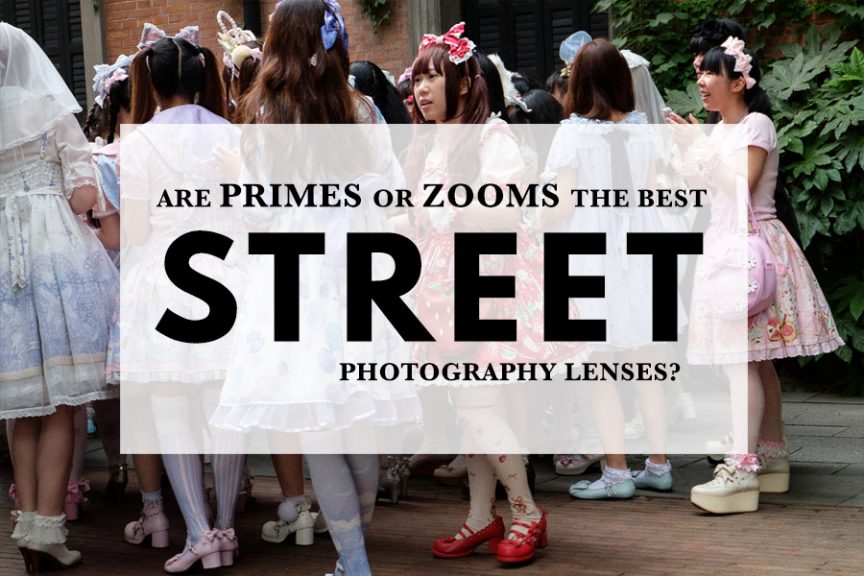 It may be difficult to know what lenses to take on a street photography shoot. Sometimes you have a good idea of what you’d like to shoot, at other times you are waiting for your subject to present itself to you.

Assuming that you are not a professional photographer on a commercial shoot, it’s usually helpful to carry minimal gear. This gives you the freedom to walk around and explore all day without getting overly tired.

This is much easier if you have a good walk around lens – a single lens that will handle the majority of photographic situations you might find yourself in.

Some photographers use a zoom. The 18-55mm lens that most cameras come with as standard is a very useful walk around lens. You can shoot with a moderate wide-angle at the 18mm end and a short telephoto at the 55mm end. 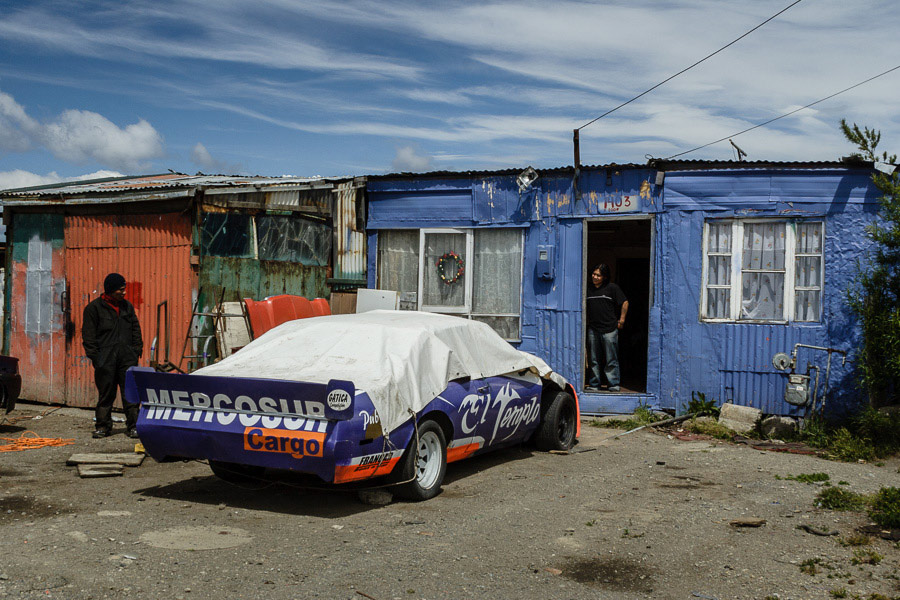 Above: Punta Arenas, Chile. These two guys were happy for me to take a photo of their expensive looking sports car. Photo taken with an 18-55mm kit lens.

In 2007 I took an EOS Digital Rebel XT (EOS 350D in Europe) with an 18-55mm kit lens on a trip to South America. Some of the photos were published in Practical Photography magazine. After seeing the photos, one of the magazine’s journalists asked me to write an article about the trip.

I often use that story as an example of how unimportant the quality of your gear can be. But I would like to think that if I repeated the same trip I would get better photos with my current Fujifilm cameras and lenses. Some of that would be due to using better tools as well as being a better photographer. 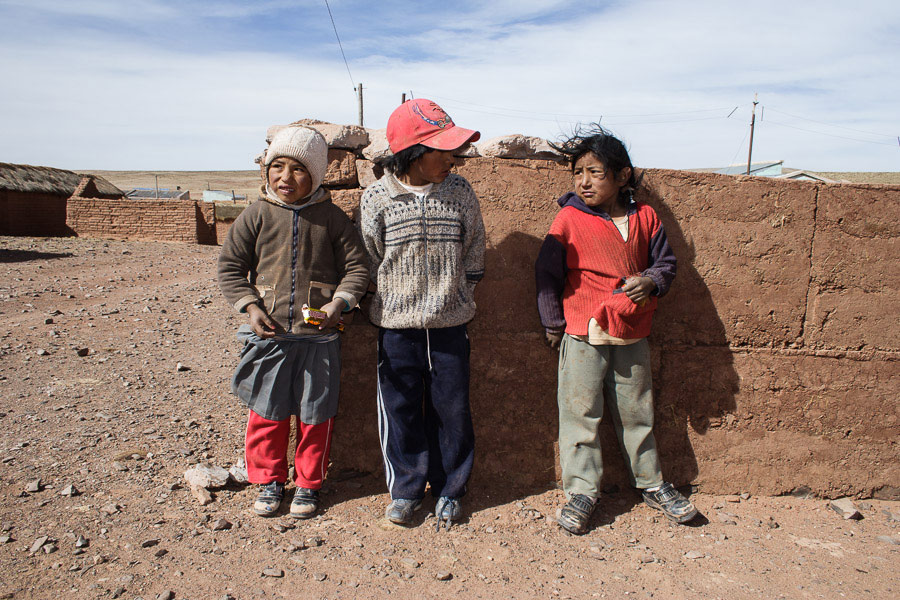 Above: I took this photo with an 18-55mm lens at 18mm. The wide-angle focal length let me photograph the children and show them in their environment – a small village 4200 meters above sea level in the Bolivian Andes. Probably not what some people would call street photography, but not all streets look like the ones we are used to in the west.

Zoom lenses are versatile. You can change focal length, react quickly to situations, and avoid the risk of dust getting on your camera’s sensor when changing lenses. Many zooms also have Image Stabilization (for those cameras which don’t have it built-in). This is useful for taking photos in low light or for experimenting with slow shutter speeds and blur. 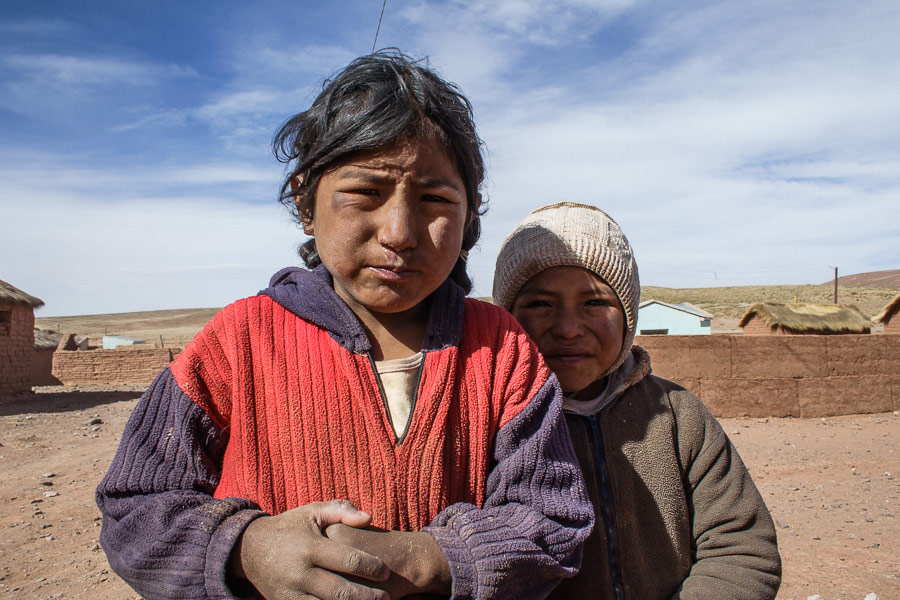 Above: A photo take a few seconds later, also at 18mm. I moved closer to the children, with the zoom set to 18mm to include the buildings behind them. 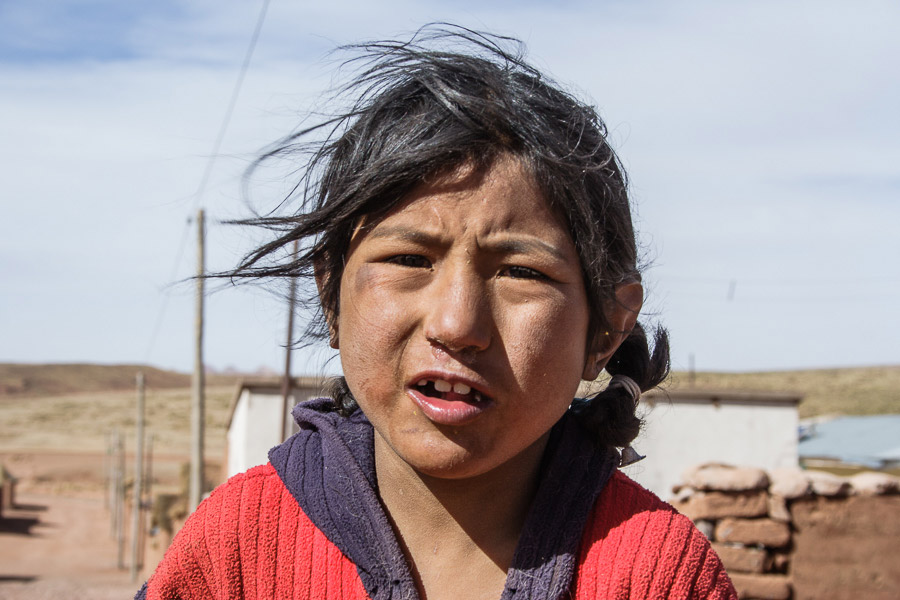 Above: The same lens, but set to 55mm. Now you can see much less of the buildings in the background. Using a zoom allowed me to change focal length without having to remove the lens from the camera. It saved time and reduced the risk of dust entering the camera body.

Zoom lenses have limitations. One is image quality, which is normally not as good as a that of a prime lens. Inexpensive zooms (like kit lenses) often have pronounced barrel distortion at the widest setting and soft corners at the maximum aperture.

Most zooms are larger and heavier than prime lenses. If you are trying to keep in the background, then using a full-frame SLR with a 24-70mm f2.8 lens is not the way to do it.

Zooms also have smaller maximum apertures than primes. This makes it harder to shoot in low light and maintain shutter speeds fast enough to freeze movement. It’s also more difficult to use selective focus to isolate the subject.

Some photographers use superzoom lenses – optics with an obscenely wide focal length range (such as 18-200mm) with the idea that they never have to change lenses. However, these lenses tend to have questionable optical quality. They are also fairly large and have relatively small maximum apertures. What you gain in convenience you lose in most other aspects.

Of course, there’s no reason you can’t carry a lightweight prime with you as well as a zoom lens, to cover all these situations. You can read more about the idea of limiting your camera gear in How to Improve Your Photography by Using Only Two Camera Lenses.

Primes have an advantage that is hard to explain and that often only becomes evident when you start to use one.

The constraint imposed by a single focal length makes you think more creatively about the image. It encourages you to move around when framing the subject as you can’t adjust the composition by zooming.

You also learn how that focal length works in terms of perspective and framing. You’ll grow to appreciate what happens when you move closer to the subject, or further away, and to anticipate how that lens sees. Your eye for a photo – your ability to see photographic potential in the subject – will improve.

Which is best – zoom or prime?

I had chance to think about this my recent trip to China. I took my Fujifilm XT-1 and two lenses with me – 35mm and 18mm primes – while walking round places like the Forbidden City in Beijing.

Most of the time I used the 35mm lens, and switched to the 18mm lens when I need to. Weight wasn’t an issue as both lenses are small and light.

But changing lenses is awkward and takes time. It’s much more convenient to use a zoom ring to change focal length. I used the widest apertures of the 35mm lens a lot for selective focus and in low light, but there were times when I was wondering whether I would have been better off with a good quality zoom lens. 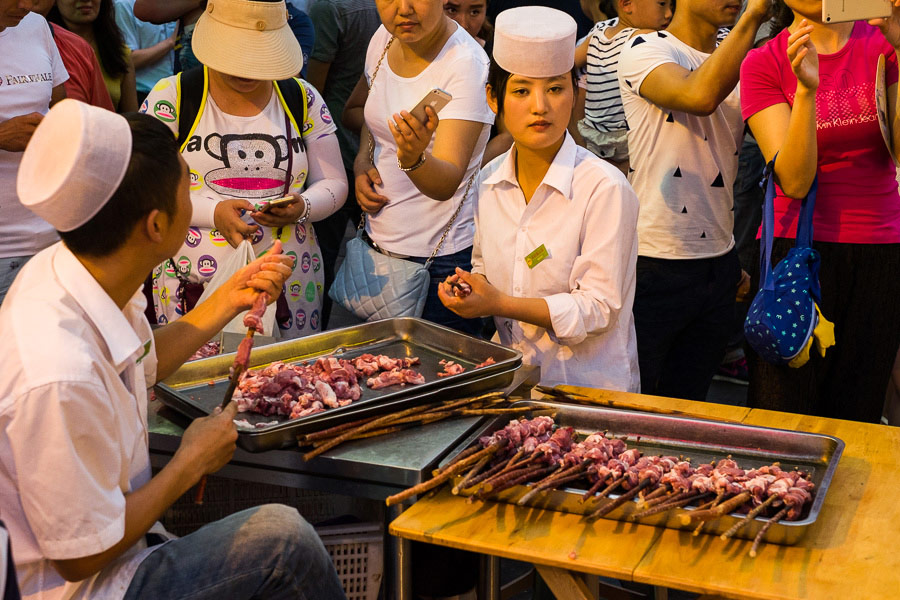 My wife was using a Fujifilm X-M1 with the supplied kit lens – a 16-50mm f3.5-5.6mm zoom. It was interesting to see her shot selection. She zoomed out a lot and like to take photos of the entire scene at 16mm. But I was concentrated on using my 35mm prime and didn’t even see the wide-angle photos.

I learned that using a prime lens concentrates the mind on seeing with that specific focal length, and can prevent you from seeing other interesting possibilities. 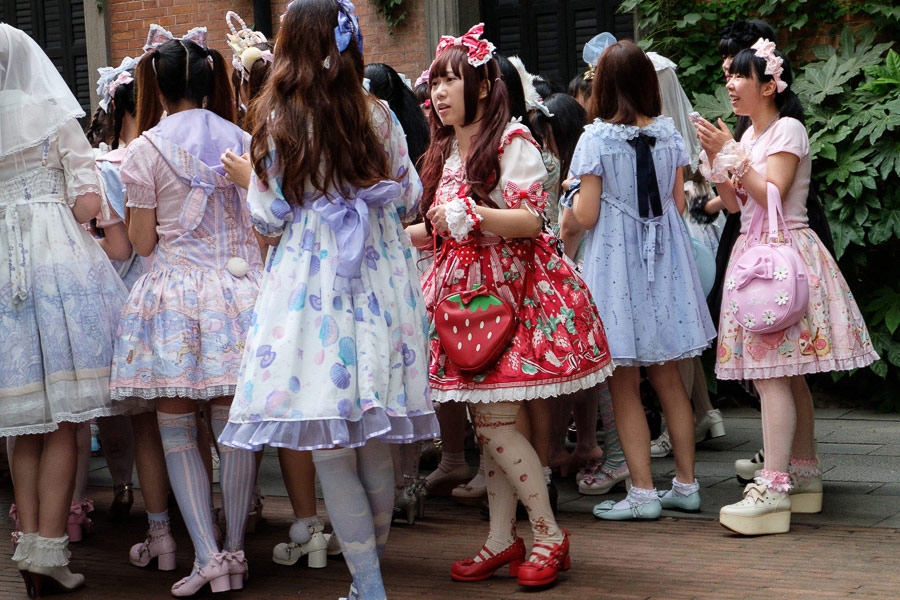 Above: Photo taken at 45mm with 16-50mm zoom lens on a Fujifilm X-M1 camera. Using the zoom allowed me to frame precisely without having to move.

The answer to the question of what lenses you should use for street photography is intensely personal. It depends on the way you take photos and the way you see as much as anything else.

Ultimately, the points raised here are things to think about, and you have to find the right solution for you. That may take some experimentation and you may even get it wrong at first. Don’t be surprised if you choose one lens yet ultimately realize that another lens would be better for you. That’s just part of the learning process, and it happens to us all. 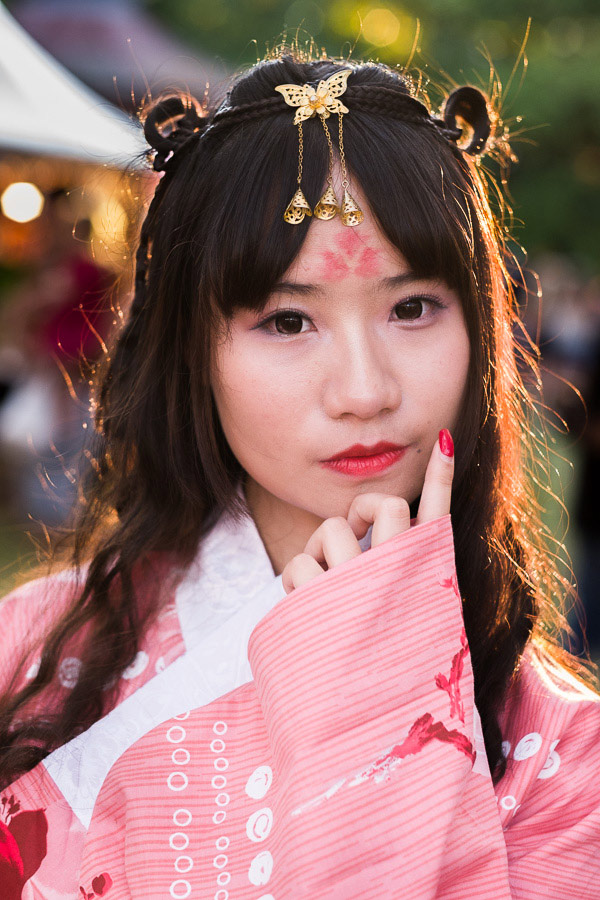 Above: Photo taken with a 56mm f1.2 at the Auckland Lantern Festival, New Zealand. I set the aperture to f2.8 to blur the background. This wouldn’t be possible with many zoom lenses. 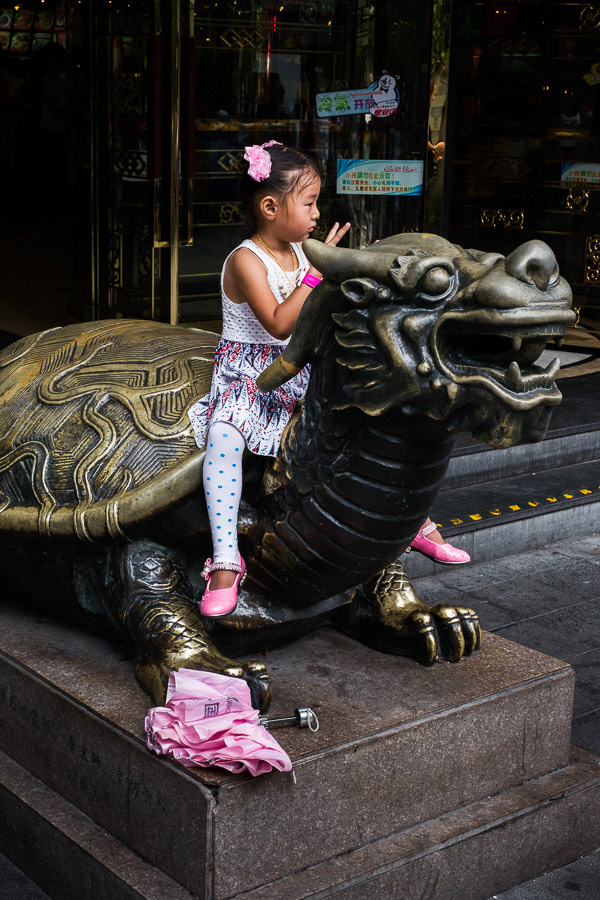 Above: One of my favorite street photos from Shanghai, China. Using a small camera (a Fujifilm X-T1) with a small 35mm prime lens helped me take photos unobtrusively like this one. I would have stood out a lot more if I had used a full-frame digital SLR with a large zoom lens. 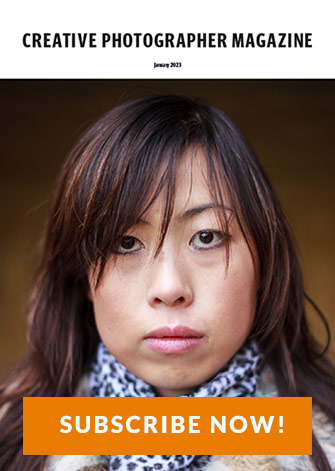 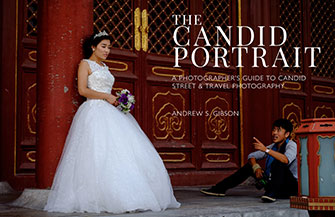