Editor's note: This month only...grab our Mastering Lightroom Classic bundle for just $19! All the ebooks are fully updated for the latest version of Lightroom Classic and come with free lifetime updates. Thanks for reading! Andrew.

Even in the digital age some photographers choose to work with film, while others go even further back in time, experimenting with processes that may have been common in the past but many people have never heard of. These include Cyanotypes, Albumen printing and Van Dyke Brown (the last one has nothing to do with Dick Van Dyke the actor, despite the name).

It takes real enthusiasm to use these old chemical processes. You may need to buy a large format camera and you would almost certainly have to mix your own chemicals. It takes lots of time and patience to learn and perfect the techniques.

For some photographers the craft element is part of the appeal, and I’m not trying to dissuade you from experimenting with old processes. But what if you like the look of an old process, but don’t want to get your hands dirty?

This is difficult in Lightroom unless you invest lots of time trying to emulate the look created by old processes. But the good news is that the B&W Effects plugin from Topaz Labs makes it easy.

What is B&W Effects?

B&W Effects is a plugin from Topaz Labs that converts color photos to black and white. It works with Lightroom, Photoshop CC and Photoshop Elements on both Windows and Mac platforms.

Topaz’s goal was to create a black and white plugin that would change the way photographers see and process black and white images, allowing you to “apply detailed, stylized, and HDR-like effects, as well as apply historically accurate black and white looks.”

Why use a black and white plugin?

If you’ve never used a plugin, you may be wondering why you might need one for black and white conversions. The answer is that plugins like B&W Effects extend the functionality of Lightroom and Photoshop by giving you more control over tonal values, powerful tools for emphasizing texture and, particularly in the case of B&W Effects, the ability to emulate antique photographic processes. 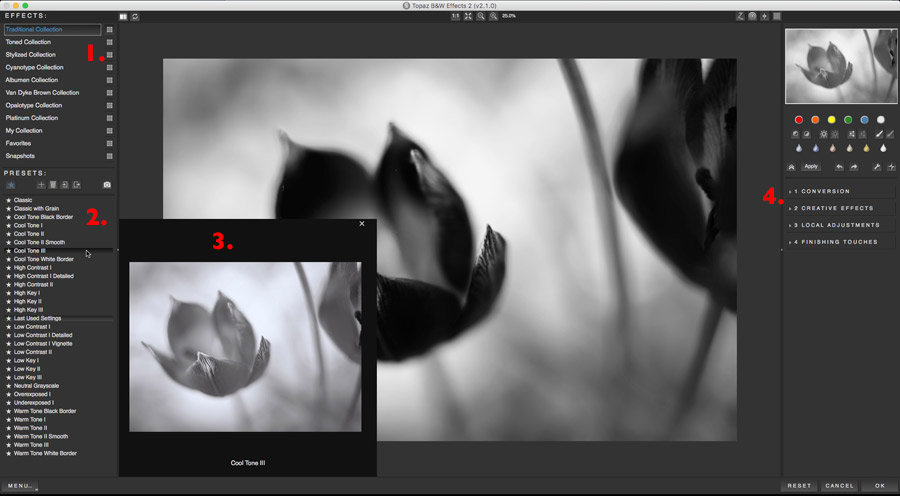 The layout will look very familiar to anybody who uses Lightroom.

The cyanotype process has been around since 1842 and is still in use today. A cyanotypes is a blue and white monochrome print on paper or card, made using hand-mixed chemical solutions. The print is developed by exposure to ultraviolet light.

You can even create cyanotypes from images originating on a digital camera by printing a negative on transparent acetate using an inkjet printer.

Naturally, the process is much simpler if you use B&W Effects. I developed the photos below using the Cerulean Dynamic and Prussian presets. 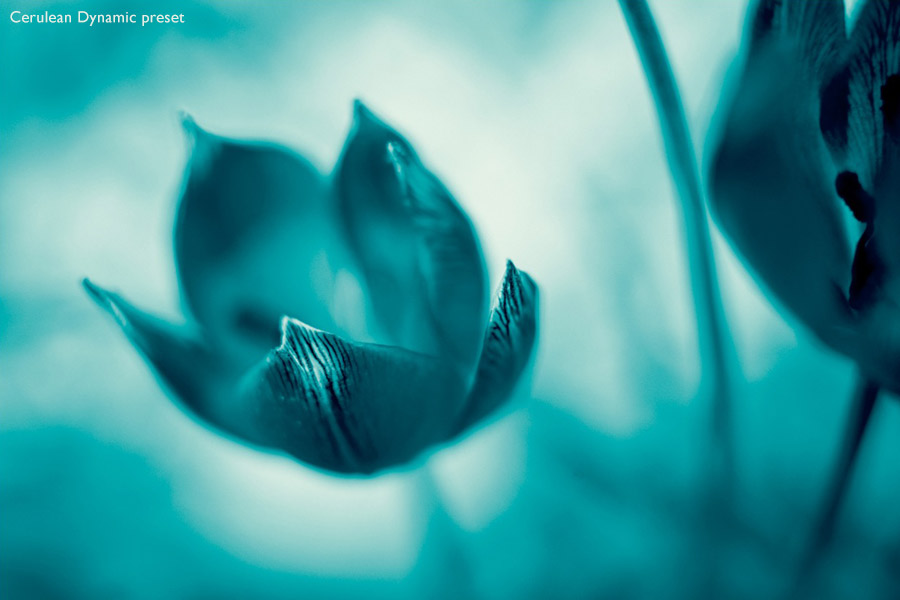 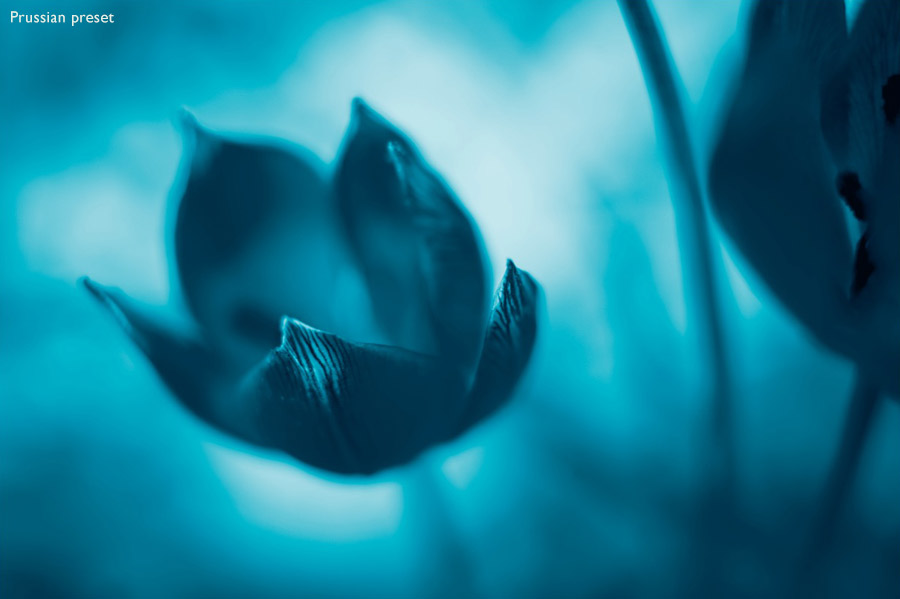 The Albumen print was invented in 1850. It uses a solution made from albumen (found in egg whites) and salt to prepare the paper for a silver nitrate solution which is sensitive to UV light. The negative is placed in contact with the paper during the exposure. As a result albumen prints are the same size as the negative.

The Albumen process was widely used in portrait studios at the end of the 19th century. If you ever see an Albumen print from this era in a museum you will notice the small size of the print and the incredibly fine detail it contains.

I developed this photo with the Chocolate Dynamic and Aubergine Dynamic presets. 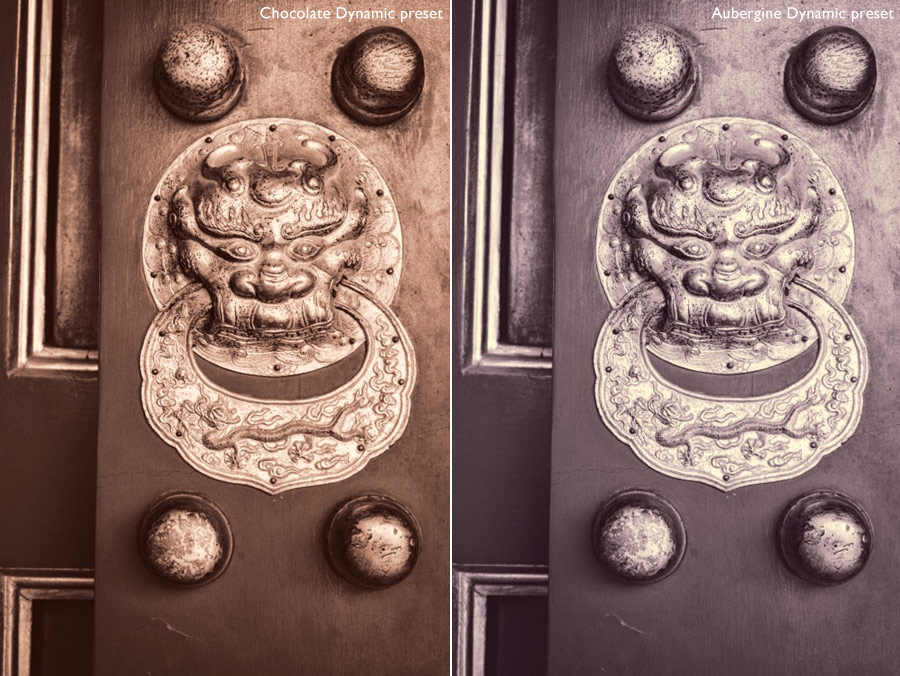 A Van Dyke Brown print is similar to Cyanotype and Albumen prints in that you expose paper coated with chemicals to UV light while it’s in contact with a negative.The print comes out a dark brown color and the process gets its name from a brown oil paint named after Flemish painter Van Dyke.

I developed this photo with the Umber Dynamic and Redwood Fawn presets. 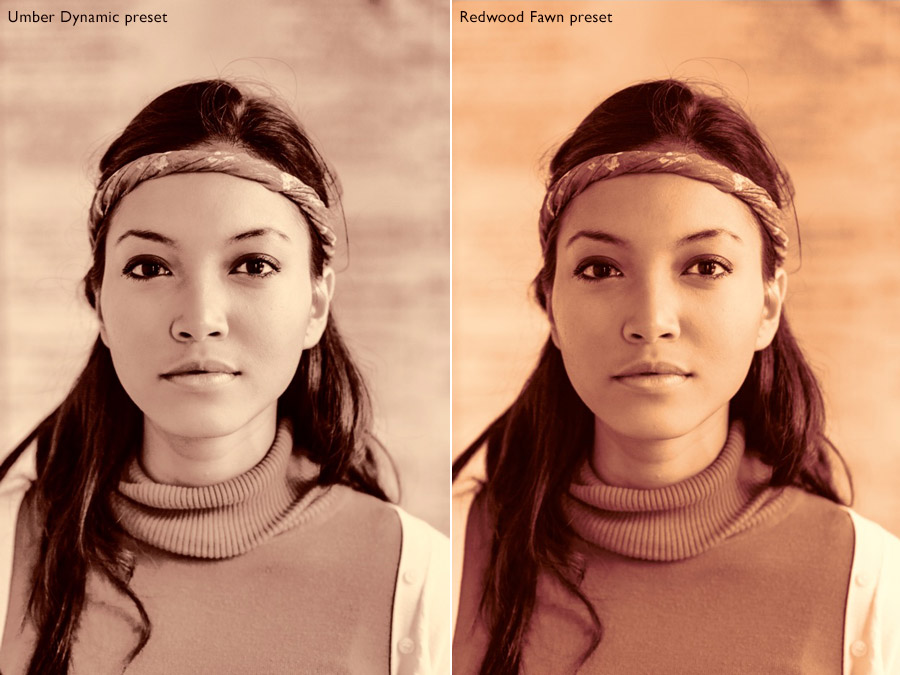 Opalotype prints are similar to some early wet plate processes in that the print is made on a sheet of translucent white glass coated with a light sensitive emulsion. The exposure was made using either a negative placed in contact with the glass or by transferring a carbon print. Opalotype prints are characterized by soft coloring and lack of detail, and may be hand tinted.

I find I get the best results with the Opalotype presets when I apply them to photos with bright backgrounds. I developed this photo with the Hand Tinted Chiffon and Milk Memories presets. 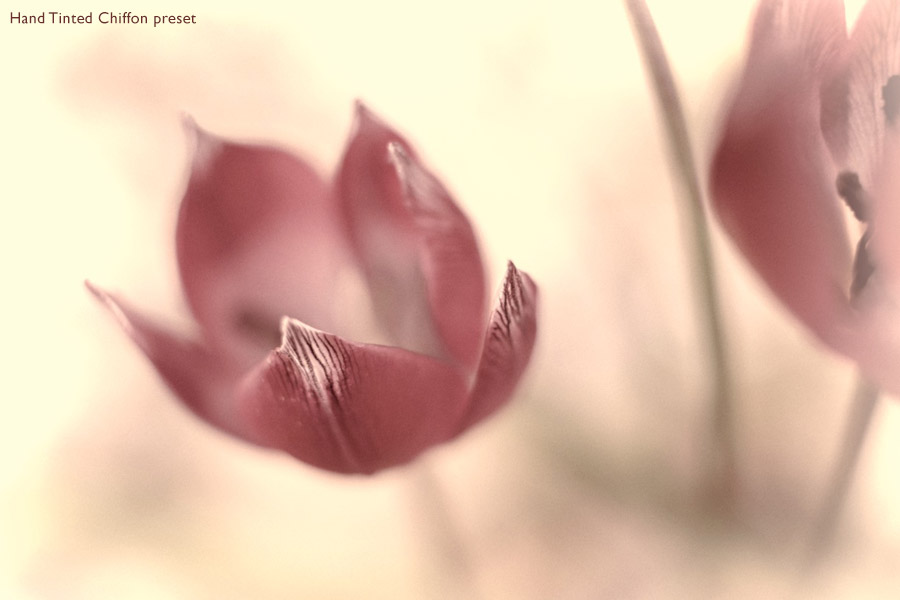 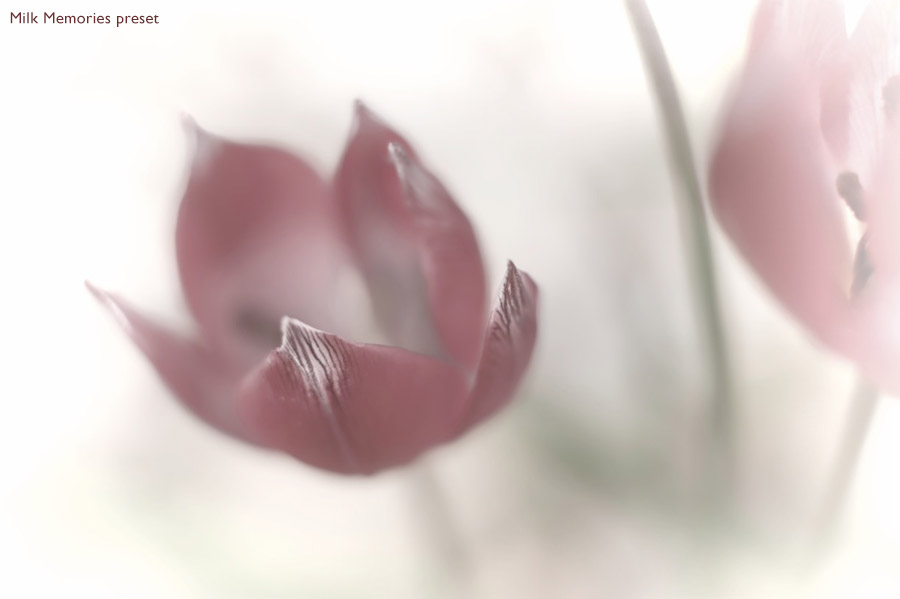 The Platinum process was develop in the 1830’s and 40’s but never came into widespread use thanks to the popularity of Albumen prints. There is something quite beautiful about genuine platinum prints, they have a wide tonal range and subtle tones quite unlike any other type of black and white print. Platinum prints have great longevity but the expense and difficulty of the process means that not many people are interested in using the process itself. Luckily, B&W Effects gives you an easy way of replicating the aesthetics of a platinum print.

I developed this photo with the Platinum II and Platinum VI presets. 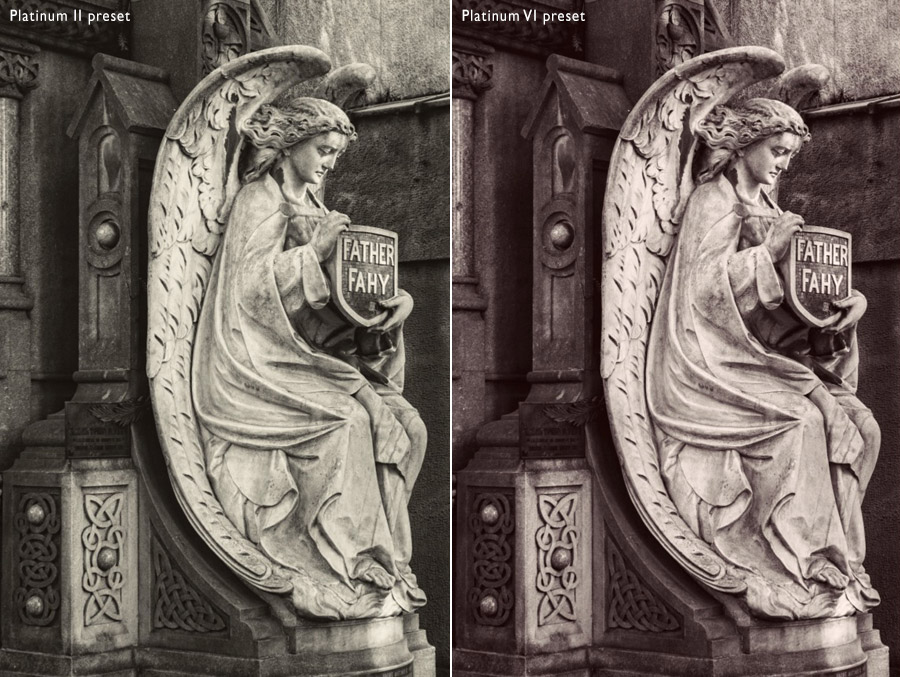 A few things to note:

• There are a total of 60 antique process presets spread across five collections in B&W Effects (yes, I counted them), giving you plenty of choice. Like all presets, you can use these as starting points and adapt the settings to suit your image and taste.

• These presets won’t work with all photos, and give the best results when you carefully match the subject to the technique. Portraits, nude studies, simple landscapes and photos of anything that’s old are all ideal subjects.

• Finally, if you are making inkjet prints your choice of paper has a big influence on the final print. Try and choose paper surfaces that match the character of prints produced using the original processes. There are plenty of options; the fine art papers manufactured by Hahnemühle and Ilford are both worth a look.

You may remember that earlier I mentioned that one of Topaz’s aims with this plug is let you “apply detailed, stylized, and HDR-like effects”. This is the other side of the B&W Effects coin – on one hand you get some interesting and unique antique photographic process emulations, on the other you can use the plugin’s sliders to create stylized black and white images.

In B&W Effects the magic happens in the Adaptive Exposure section. This set of controls lets you enhance the dynamic range of the image and create grungy or HDR-like effects. Sliders bring out extra detail in the image, and the plugin uses a clever concept called regions to address contrast and detail in specific areas. 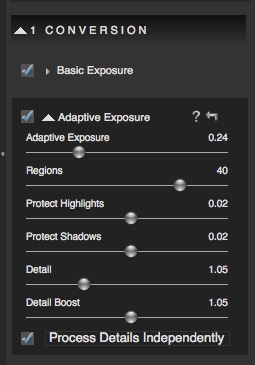 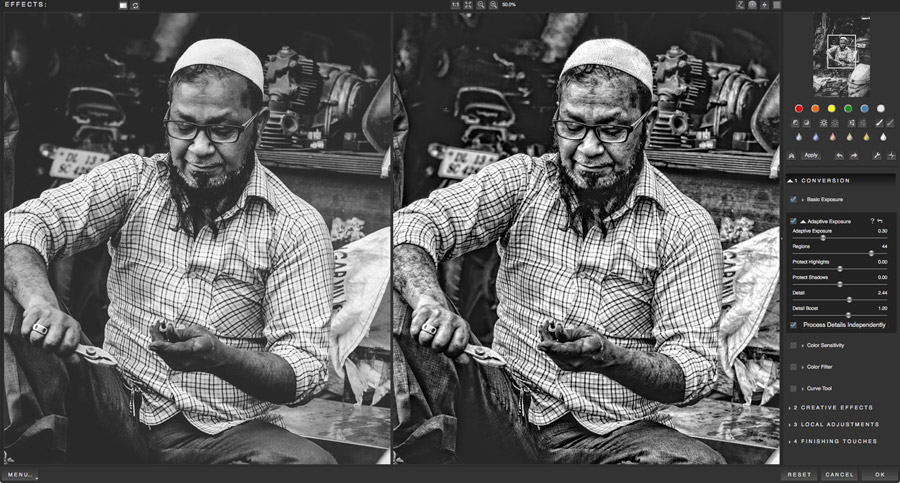 The Adaptive Exposure adjustments make the image pop and enhance detail and texture. Here’s the same comparison with the photos zoomed out. 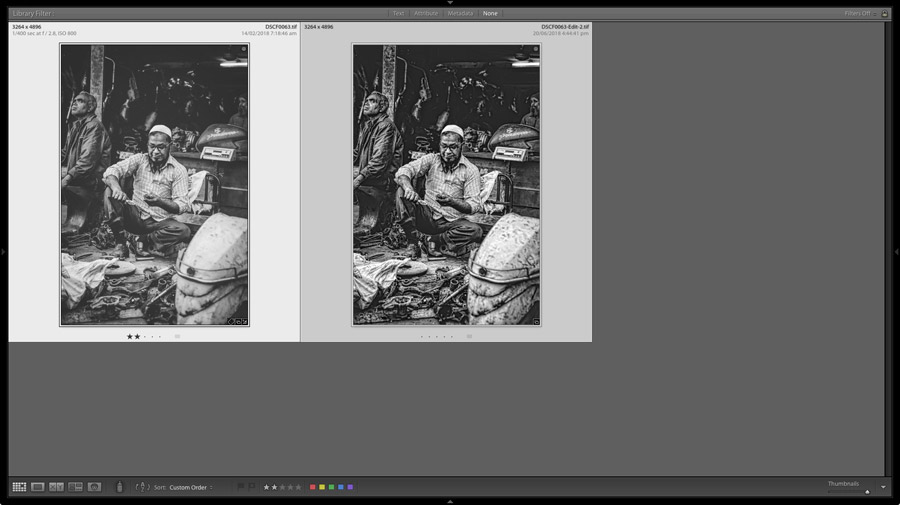 As you can see, Adaptive Exposure certainly helps you achieve the stylized look. If you’re like me, you’re probably a bit wary of the over-stylized black and white images, but don’t let this fact put you off exploring the potential of this plugin. Remember that you can make the effect as subtle as you like. I’ve kind of exaggerated it a little here to give you the idea of what it can do. Unfortunately there’s no way of applying Adaptive Exposure as a local adjustment.

As a final example, here’s a photo that I made using a Van Dyke Brown preset then applying Adaptive Exposure to bring out the textures. 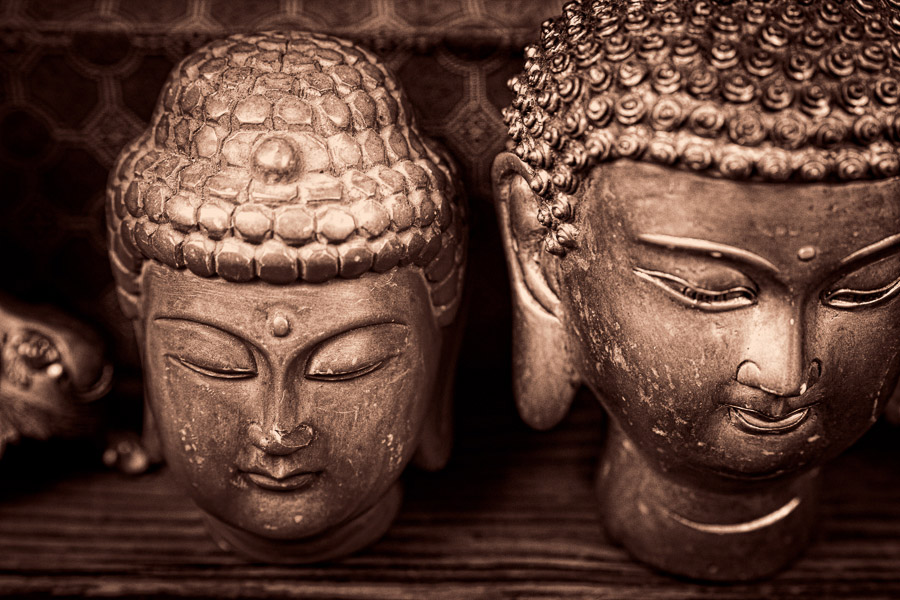 Topaz B&W Effects isn’t the slickest black and white plugin I’ve used. The interface could do with an update and the controls and sliders feel a little clunky at times.

But if you like the idea of emulating historical processes then there isn’t a plugin that does it better than Topaz B&W Effects. For me, this one feature makes the plugin worth the money, and also one of my favorite plugins to use, despite the outdated interface.

The Adaptive Exposure sliders open up lots of creative possibilities, especially if you combine them with some of the presets. It’s just a shame there’s no way to apply them as a local adjustment. Hopefully this is something that comes in a future version.

If you’re curious to see whether B&W Effects would work for you the best thing to do is download the free 30 day trial and test it out.

Buy The Magic of Black & White: 50 Assignments today and get an inspirational photography workshop in your pocket!