Projects are essential for photographers as their work evolves. A project gives you direction and motivation. It helps you see possibilities and gives you something to aim for. Projects can cover a set length of time, or be returned to again and again over the years and decades.

The hardest part about coming up with a large project like this is thinking of the idea. Here’s a good one that’s inspiring – the Atlas of Beauty. Romanian photographer Mihaela Noroc spent two years traveling the world taking photos of women from different countries. This is a great project. It’s focused. The aim is clear.

The project also has great legacy potential. It’s about something deeper than the immediate subject. It connects people by exploring and documenting an important aspect of the human condition. It has historical value. In 100 years time people will write stories about these photos the same way we do now about photos taken a century ago.

Another feature of this project is that the photographer threw herself into it with great intensity. She left her job, travelled the world and funded the project through Indiegogo.

Not many people are in a position to do this, but her intensity, determination and dedication have resulted in a project that resulted in its own book. It’s an extraordinary story.

The problem with reading about projects like this is that you can feel pressure to come up with a similar grand idea. This is hard – it’s not easy to think up ideas this good. And even if you did, you may not have the opportunity to ditch everything to pursue it. Most photographers need simpler projects.

With that in mind, here are some concepts I have come up with for projects. Some of these are based on what I’ve seen other photographers do. Some are simpler than others. I’m listing them here not because you should do them, although if you want to you can, but to inspire you to come up with similar ideas.

1. Photographing artists and craftsmen. I’ve been doing this for several years. I’ve made new friends, gained insights into the creative processes of other people, and improved my photography skills.

Here’s a photo I took recently of a blacksmith at work. 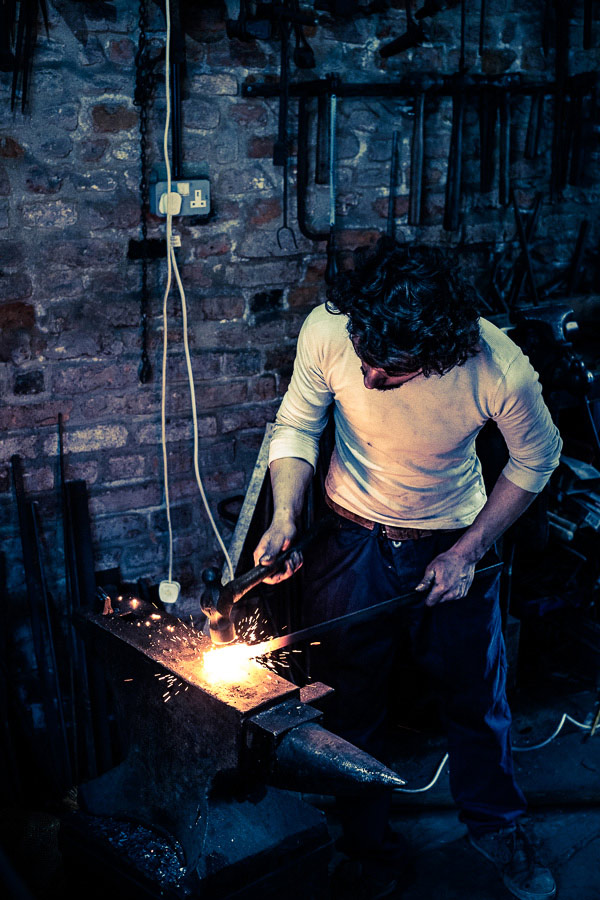 2. Making portraits of circus performers. This started because I saw a photo of a fire performer posing with lit fans. It was a beautiful image and I wanted to take one just like it. A couple of years later I saw someone mention someone who did this on Facebook. I didn’t know her but I sent her a message to ask if she was interested. She was – and knew other people that did similar things. I haven’t taken portraits of circus performers for a while, and need to get back into it, but it’s certainly been an interesting experience and I’ve also made new friends. 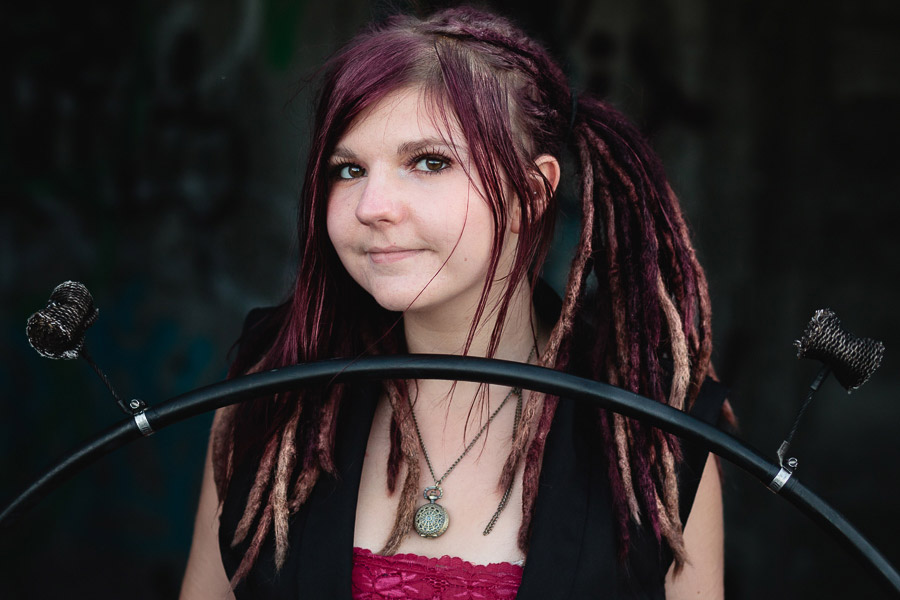 3. Portraits of people with dreadlocks. This followed on from the previous idea, as many circus performers have dreadlocks. 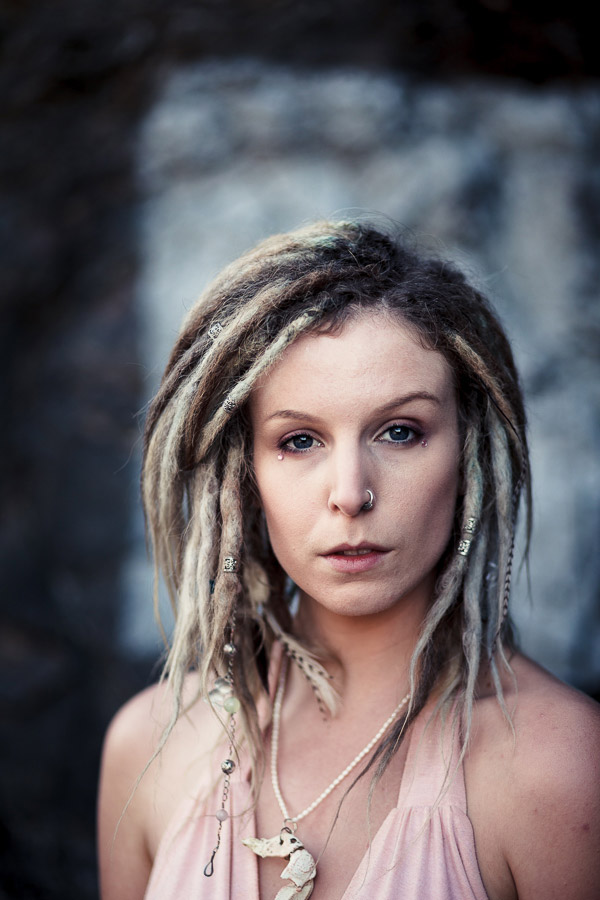 4. 100 strangers project. The idea is that you photograph 100 people you don’t know, by approaching them and explaining that you are participating in this project. It’s a great excuse to ask interesting people if you can make a portrait of them. You can learn more about it at the official Flickr group and this article.

5. Photographing the night sky. Wellington resident Mark Gee has made a name for himself doing this. New Zealand is sparsely populated with plenty of open spaces and little light pollution. But there are many people doing this sort of photography around the world.

6. Peace in 10000 hands. New Zealand photographer Stu Robertson has a project where he photographs a white rose, a symbol of peace, in the hands of people around the world. The project has taken off in a big way and subjects include celebrities like Ricky Gervais, Danny DeVito and the Dalai Lama. This is another simple, yet powerful project idea. I’m not saying you should copy it, but what ideas does it inspire?

7. 365 project. A photo a day, for an entire year. I haven’t seen these mentioned as much as they were a few years ago, but people are still doing them. The idea is that taking a photo every day forces you to find something interesting to photograph. Especially if part of the project is posting the selected photo to a website or photo sharing website like Flickr. The accountability makes it harder to miss a day.

8. The personal landscape project. It occurs to me that when it comes to landscape photography many photographers lack imagination.

Let me give you an example. I recently visited family in north Norfolk in the UK. It doesn’t have mountains or other awe-inspiring scenery. It’s more of a quiet beauty that grows on you as you learn to appreciate it.

But where’s the imagination? Where’s the beautiful black and white work (most of it’s in color)? Where’s the personal interpretation? Anybody can take a photo of a windmill. What I want to know is what does the landscape mean to you once you move away from the well known locations?

I’ve never been to Yosemite and I’m sure that if I did I would take photos of the same iconic views as Ansel Adams. But I’m not Ansel Adams, and neither are you, and copying his photos, however iconic they are, doesn’t make me or you a good photographer. That’s just chasing other people’s images. Find your own. What does the landscape mean to you?

In Norfolk, I started taking black and photos with an infrared converted camera. It evolved into a mini project photographing the Norfolk landscape through my eyes. It helped that I was seeing it with fresh eyes after being away for five years.

I came up with images like this photo of beehives in a field. It’s a hidden scene that you won’t see on a local gallery wall. But it’s meaningful and personal to me. 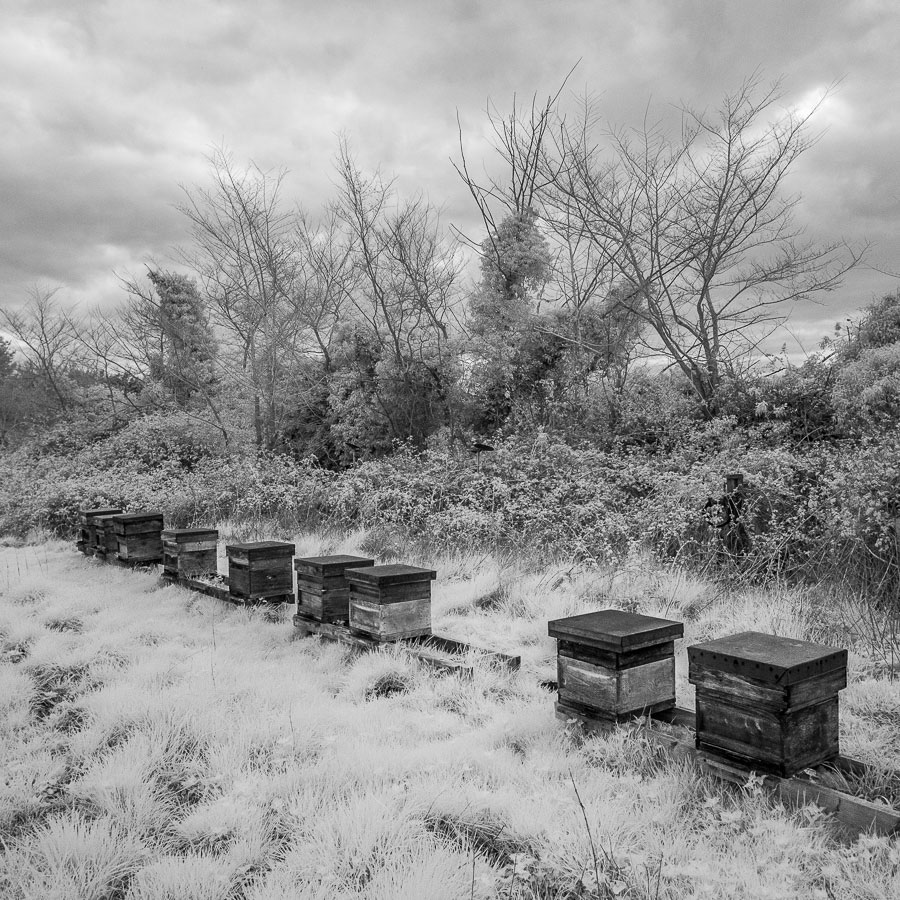 But perhaps even these simpler project ideas don’t appeal to you. In that case I suggest you try what I call assignments or mini projects.

The idea is that you set yourself a creative photography brief, with the aim of making a set of three or six photos.

The brief could be as simple as making photos of flowers in your back garden, or as complex as you like.

The idea is that the brief gives you focus. Instead of wandering around with your camera making photos of things that catch your eye, you’re concentrating on a specific idea.

Making a set of three or six photos challenges you to make a group of photos that look as if they belong together.

Here’s an example. I made the photos below at a local garden. I gave myself the brief of capturing the unusual plants amongst the setting of giant greenhouses, historical buildings and a ruined abbey. Then I selected the six best photos and presented them as a set that you can see below. 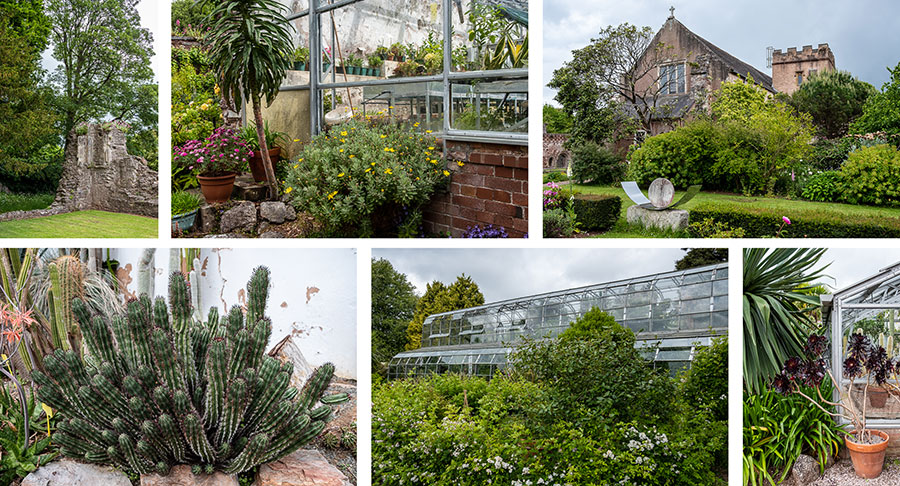 Working in assignments or mini projects is a powerful idea that can rapidly improve your photography. If you’re stuck for inspiration, there’s 150 ideas you can put into action right away in my books 100 Creative Photography Assignments and The Magic of Black & White: 50 Assignments.

If you’ve read this far I hope you enjoyed these project ideas, and that they inspire you to do the same projects or come up with similar ideas of your own.