Earlier in the year I wrote about close-up lenses and how they can help you get closer to the subject for close-up photography. In this tutorial we’re going to look at another accessory you can buy to help you get up close – extension tubes.

The main benefit of buying extension tubes is that they can be used with any of your lenses. They’re also an easy accessory to carry around in case you need them. We’ll cover that in more depth later in the tutorial, but first, let’s take a look at how extension tubes work.

How do extension tubes work?

If you take any camera lens and turn the focusing dial to move the point of focus closer to the camera, you’ll notice that the front of the lens moves outward.

The distance between the front element and the sensor (or film) plane is called extension.

When your lens is set to its minimum focusing distance, the front element is as far forward as it’s going to go. You’ve reached the limit of the lens’s design. Want to get closer still and magnify your subject any more? That’s where extension tubes come in.

Extension tubes are hollow, light-tight tube that fit between your lens and your camera mount. An extension tube moves your lens, and consequently the front element of the lens, away from the camera. That means you can focus more tightly on the subject and get more magnification.

This is the Fujifilm MC-EX 16 extension tube that I use. The electrical contacts that allow the lens and camera body to communicate are visible at the back (more on the importance of this later). 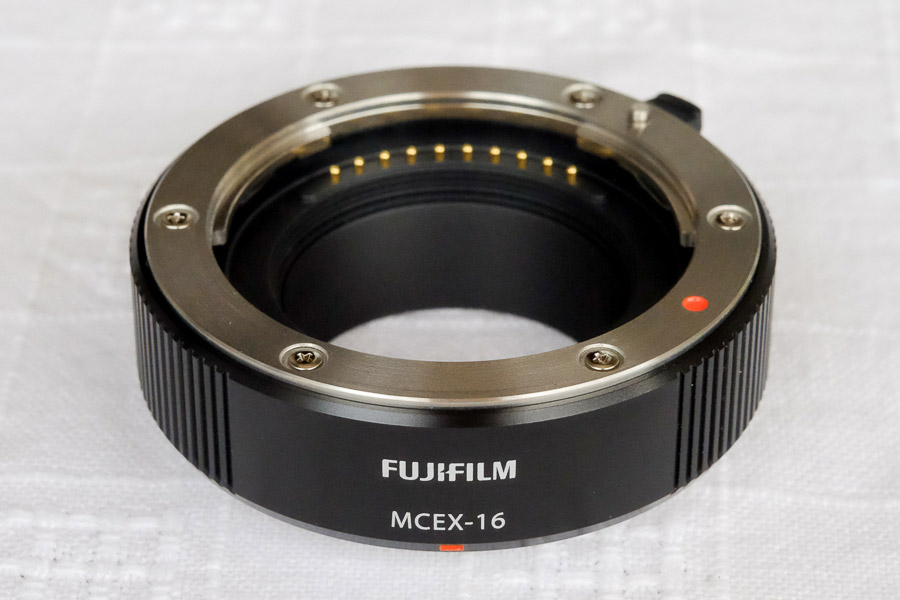 The photo below shows my Fujinon 35mm lens mounted to an X-Pro 1 camera. The extension is the distance between the front lens element and the sensor plane. This figure determines both the closest point the lens can focus on (28cm in this case) and the magnification it’s capable of achieving. 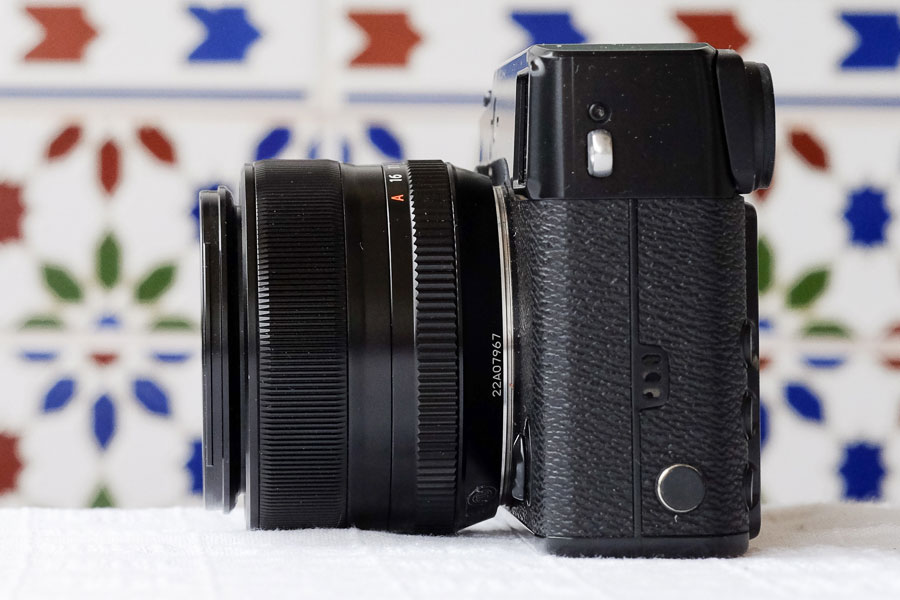 Below is the same lens with the MC-EX 16 extension tube added. You can see that the front element of the lens is now 16mm further away from the sensor plane. Now the lens can focus on a much closer point. As a result we get more magnification. 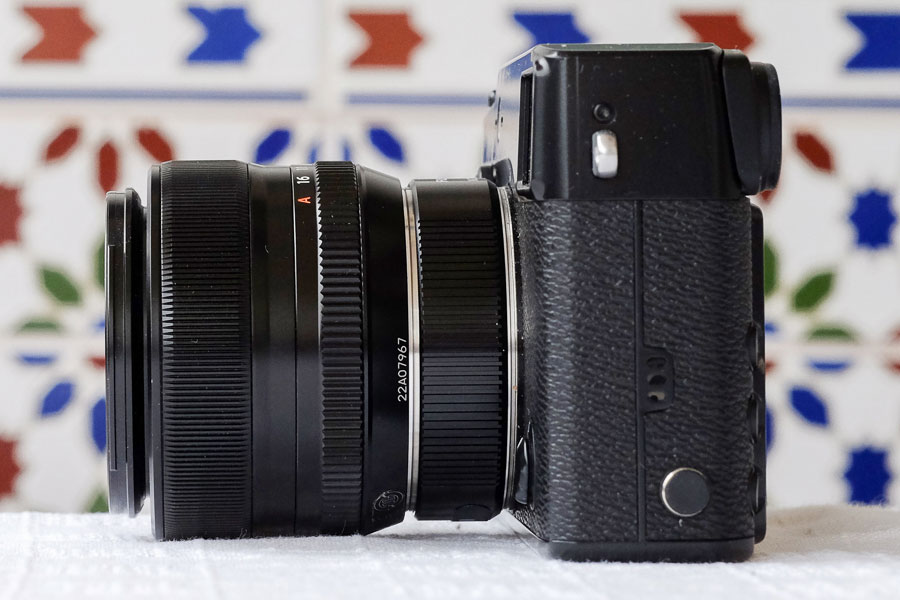 Extension tubes are a great tool and I love them, but I need to tell you that if you’re after the best possible optical quality and the most versatility then you’ll need a macro lens. There’s no way around it if you’re serious about macro and close-up photography.

The main reason for this is that macro lenses are optimized to give their best optical performance at close focusing distances.

Macro lenses also have other useful features, such as having a wider focusing range (from up close to infinity) that gives you more freedom to frame the subject exactly how you want to, or image stabilization designed to reduce the specific type of camera shake observed in macro photography.

What are the benefits of using extension tubes?

But don’t let me put you off buying extension tubes. They’re capable of excellent results, as you can see in the photos illustrating this tutorial.

The main benefit of extension tubes is that they are small and light. They’re ideal for anybody who travels a lot, wants to keep the weight of their camera bag down, or for when you leave your macro lens at home.

For example, the Fujifilm MC-EX 16 extension tube that I use is so small it’s easy to take with me every time I go out in case I need it.

You can also have fun experimenting with using extension tubes with vintage lenses or with quirky modern lenses such as those made by Lensbaby. Here’s an example taken with a Lensbaby Edge 50 lens and 16mm extension tube. 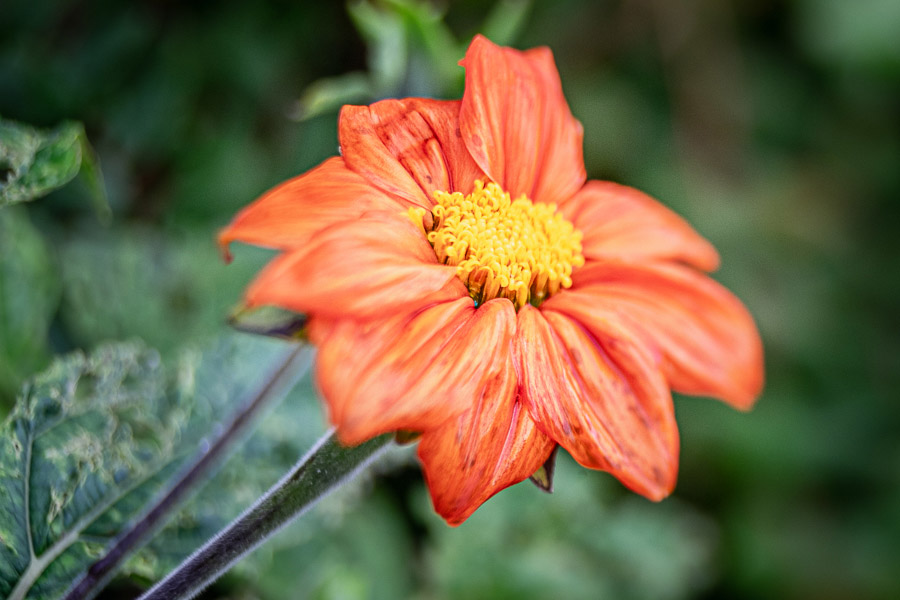 In most cases it’s also cheaper to buy an extension tube than a macro lens (you’ll need to shop around on this one though, some extension tubes are surprisingly expensive and you don’t always have to spend lots of money to get a good macro lens, especially if you buy second hand).

Do extension tubes have any disadvantages?

The only disadvantage of extension tubes is that there is some light loss. Adding an extension tube makes the effective aperture of the camera lens smaller. This means you need to use either a longer shutter speed or higher ISO to compensate for the loss of light. The good news is that your camera takes care of this automatically for you if it’s set to an automatic exposure mode.

Now it’s time to look at some photos taken using extension tubes. Let’s start with a photo that was taken using my 35mm lens (on an APS-C camera). It’s the closest I could get to the flowers with that lens. 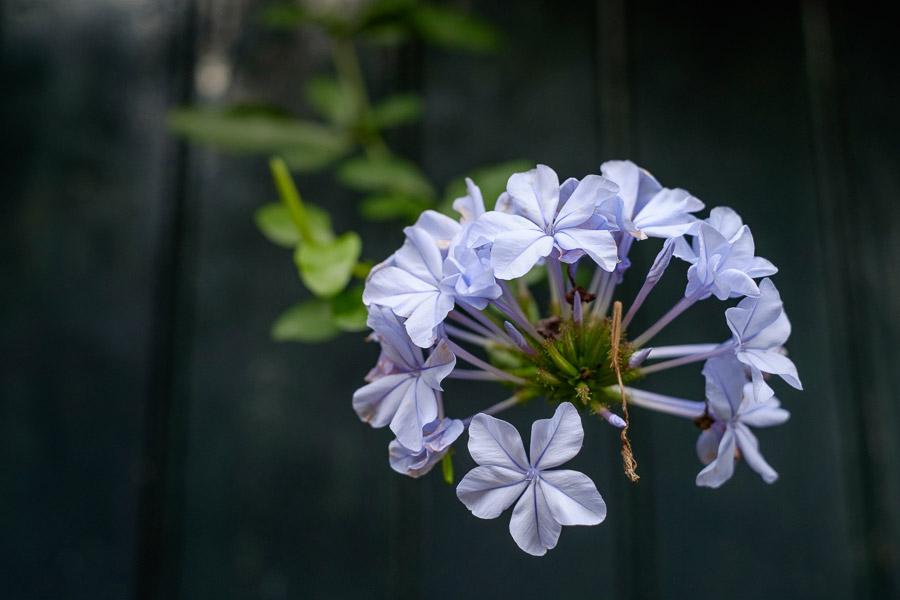 I made this photo using the 35mm lens plus the 16mm extension tube. You can see how much difference just a small extension tube made. 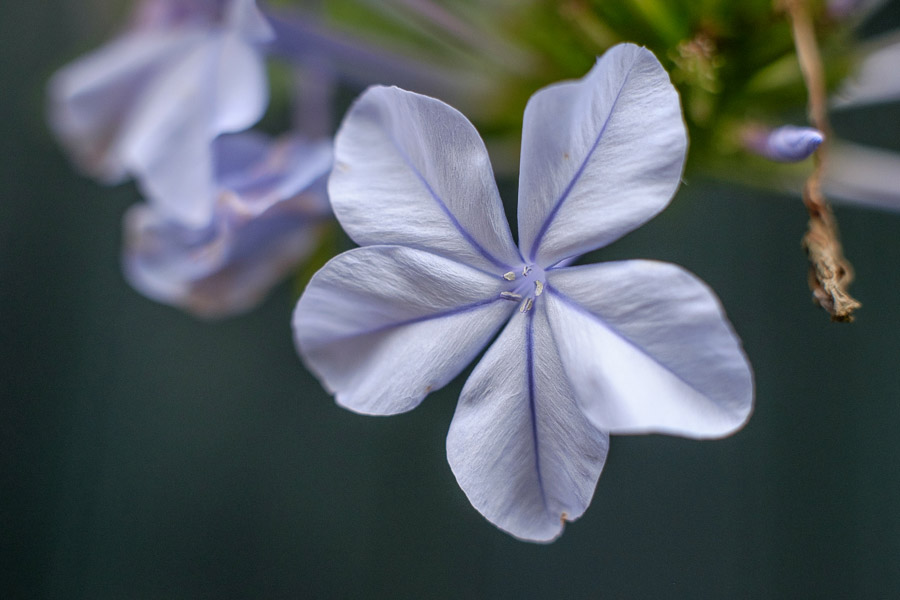 Here’s a photo made a Canon 85mm lens (on a full-frame camera) fitted with a 12mm extension tube. 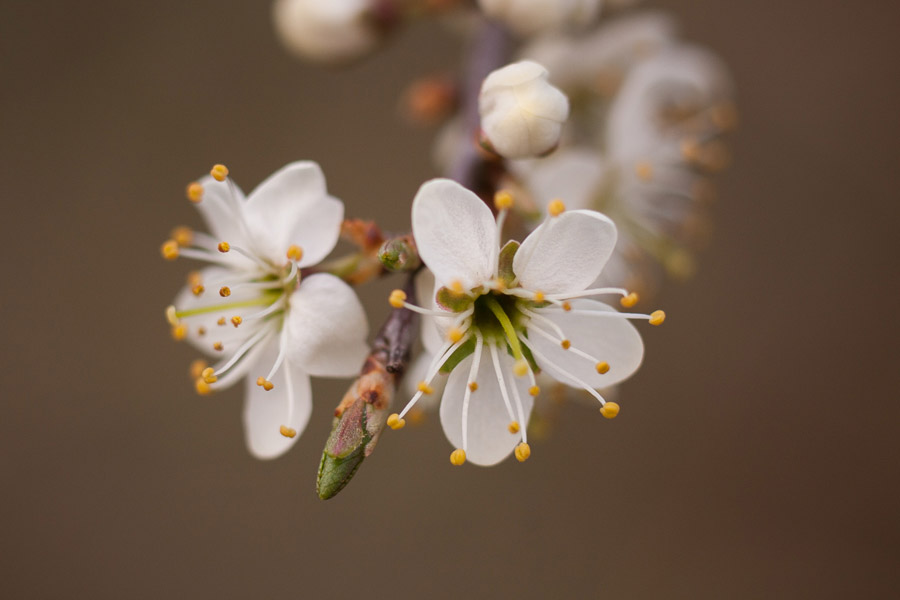 I made this photo using the same lens using a 25mm extension tube. It shows the huge difference changing the tube makes to the magnification. 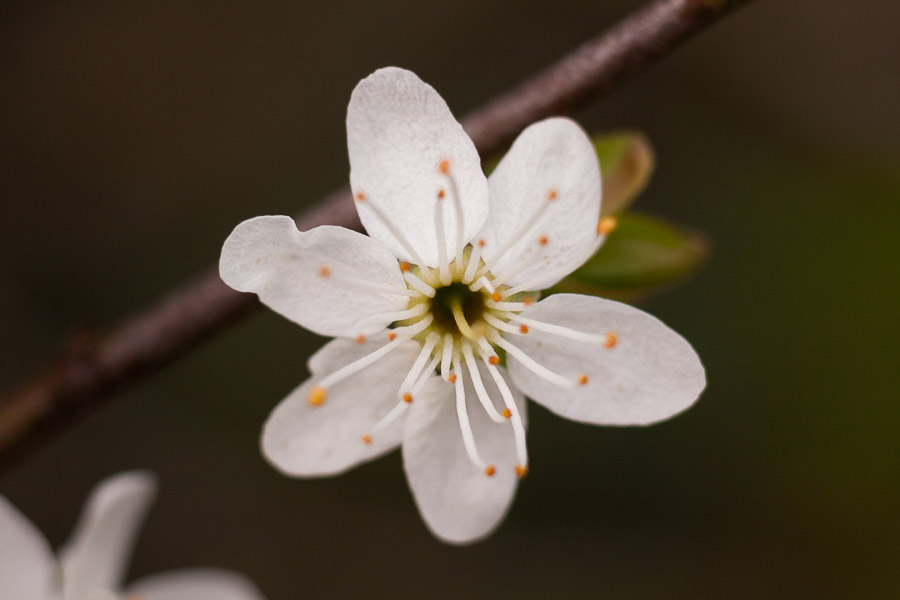 Why are some extension tubes so much cheaper than others?

You can buy inexpensive extension tubes from websites like Amazon or eBay. These may look like a great deal but the problem with these tubes is that they break the electrical connection between your camera and the lens.

If your lens has an electronically controlled aperture (and most do) then you can’t stop it down. That’s not much good for close-up photography as you need to use a small aperture to get good depth of field.

Your camera will still work, and meter the subject to give you the correct exposure. But as a result of the way they work these cheaper extension tubes are only useful if you have a lens with a manual aperture ring.

The best extension tubes to buy are those made by your camera manufacturer, or by a third party like Kenko or Vivitar. The important thing is that the extension tubes maintain the electronic connection between your lens and camera.

There’s a choice of two or three extension tube sizes for most cameras. The widest one gets you closest, and the narrowest comes in useful when you don’t need to be quite so close. You may want to start off buying one size, but will probably end up buying another extension tube to cope with different situations. Sometimes you can save money by buying them in sets.

Extension tubes work best with lenses of focal lengths between 24 and 100mm. They are not so effective when used with telephoto lenses (a close-up lens is the best option). You can’t use an extension tube with some wide-angle lenses as it becomes impossible to focus with it fitted.

To see how much magnification an extension tube gives you with a specific lens, check the information sheet that came with it. Websites like B&H Photo Video often have this information too.

You can also use this easy formula for calculating how much extra magnification an extension tube gives you. You’ll need to know the magnification of your lens to work it out (check the spec sheet that came with it).

This figure is useful for comparing the magnification you can get with different lenses when paired with your extension tubes. It also helps you see how close you can to the 1.0x magnification offered by macro lenses. 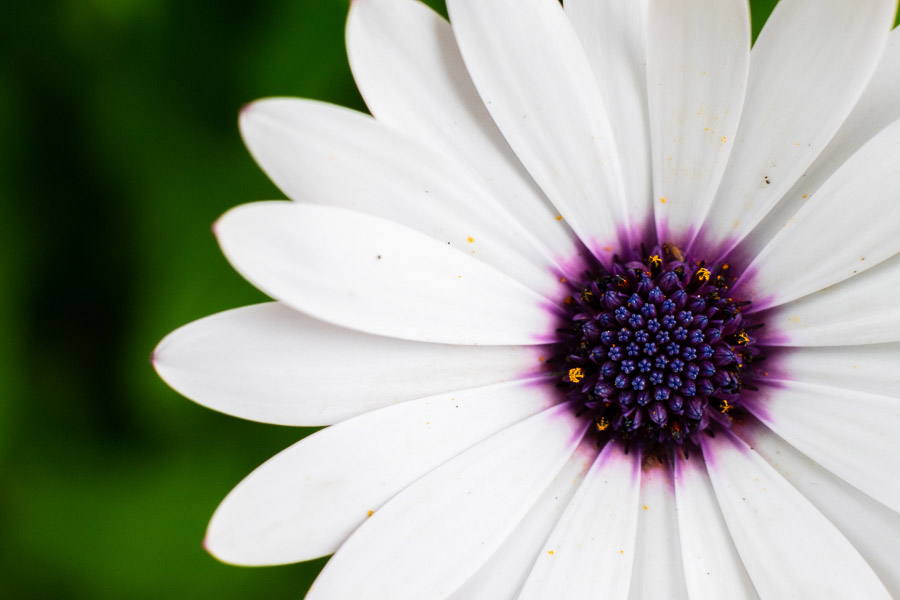 These tips will help you get the best out of your extension tubes.

You may find it’s easier to focus manually, especially at high magnifications. Try switching to manual focus and setting your lens to its minimum focusing distance. Then move closer to your subject with your body until it’s in focus. You’ll get the highest level of magnification possible with this technique.

Depth of field is very narrow when you get close up with extension tubes. Don’t be afraid to raise your ISO in order to get a small aperture and good depth of field.

If your subject isn’t moving you can use a tripod. This lets you use a low ISO to maximize image quality and eliminate camera shake. It’s also easier to frame the photo when you’re not hand-holding your camera.

If you’re hand-holding your camera, you’ll need to use a fast shutter speed to obtain a sharp image. Care is required as the extra magnification magnifies camera shake as well as the subject. Shutter speeds of 1/250 second or more are ideal. 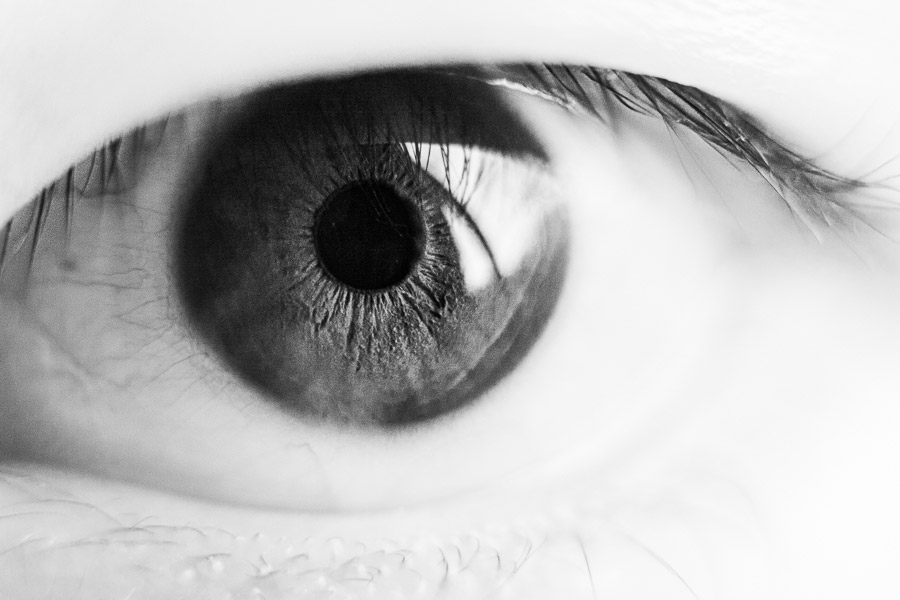 What subjects are best for extension tubes?

I like to use extension tubes for taking photos of flowers and plants. I also had a lot of fun taking photos of the model’s eye in the photo above. Insects and small animals are another popular subject. You’re only limited by your imagination! 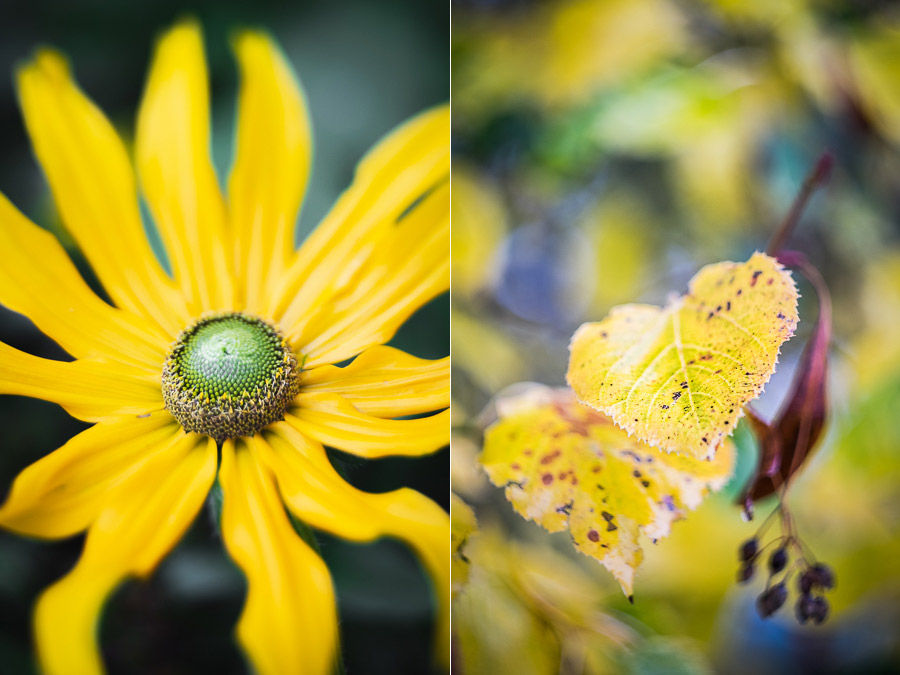 Get our latest tutorials (and two free ebooks) in printable PDF form to keep forever when you subscribe to Creative Photographer Magazine. Click the link to learn more 🙂

Learn how to take beautiful photos using any lens with our popular ebook Mastering Lenses. The lens buying guide alone could save you hundreds of dollars on your next lens purchase!