What is dodging and burning?

These terms originated in the darkroom where you had to put something between the projected negative and the paper (usually a piece of card attached to stiff wire) to make part of the photo lighter (hence the term dodging). Or let more light hit part of the paper (using a big bit of card with a hole cut in it), hence the term burning in.

Yes, it all seems terribly old fashioned compared to Lightroom Classic. But while the techniques and medium have changed the principles are still the same.

By the way, if you use Lightroom 6 you’ll be pleased to know all these techniques work for you as well.

Why do photographers dodge and burn?

Before we learn how to dodge and burn black and white photos, let’s think about why you would do so. Highlights are said to have more visual weight, which means they naturally pull the eye to that part of the frame. You can use this trait to improve the tonality of your black and white photos.

Dodging and burning in Lightroom Classic has evolved beyond simply making parts of the photos lighter or darker. For example, in this tutorial you’ll see me use the Clarity and Texture sliders to adjust tonality and bring out texture.

These ideas apply just as much to color photography as black and white photography. Feel free to experiment with these techniques on your color photos too.

Here’s the first photo we’re going to work with in today’s tutorial. Here I’ve already converted it to black and white by setting treatment to B&W, tweaking the tones in the B&W panel, and adding Clarity to bring out texture. 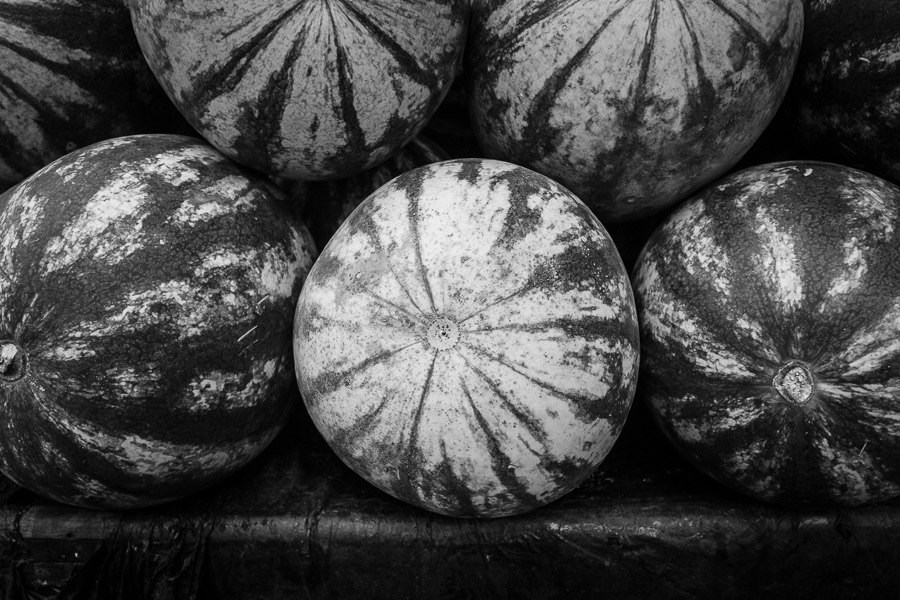 Before you dodge and burn

In order to dodge and burn you need to decide what you want to achieve before you start. With this photo I decided to make the central watermelon a stronger focal point within the composition. Decision made, it’s just a question of how to achieve it. In this case I decided to start by making the outer watermelons darker.

Step 1: Use a Radial filter to burn in the edges

The watermelons have a circular shape so it makes sense to use the Radial filter to make the outer watermelons darker (or burn them in using darkroom terminology).

I did that by placing a Radial Filter over the central watermelon and moving the Exposure slider left. This is the result. 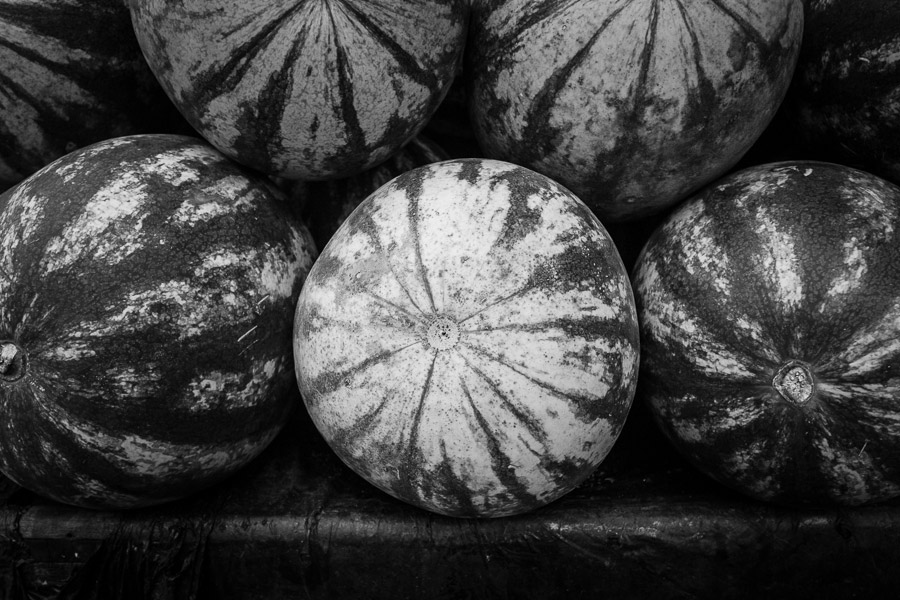 A couple of things to note about the Radial Filter:

• When using the Radial filter (or the other local adjustment tools the Adjustment Brush and Graduated filters) you can use the keyboard shortcut to show the mask it creates. In Lightroom Classic, the mask is shown in red. The area covered by the mask is affected by the adjustment. In other words, it’s more of a selection than a mask. 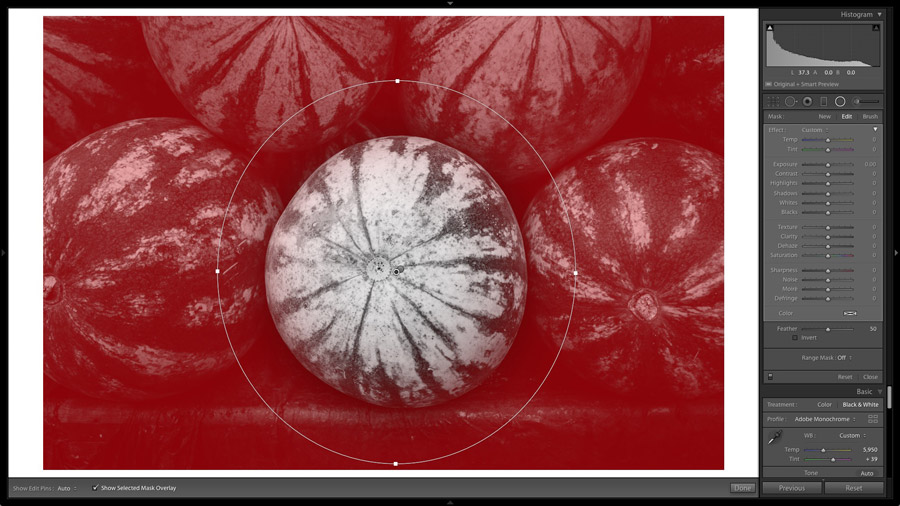 Tip: Use the Shift + ‘O’ keyboard shortcut to change the color of the mask.

• The Feather slider controls the smoothness of the transition between the area affected by the mask and the rest of the photo. The default setting of 50 seems to work well. You can set a lower figure for a sharper transition or a higher figure for a smoother one.

• By default, the mask is applied outside the Radial Filter. Check the Invert box to apply it inside the circle instead.

Step 2: Use another Radial filter to burn in the central watermelon

My initial thoughts were to make the central watermelon lighter. But then I decided that the photo would be more interesting if I made it darker.

This is an example of how you can change your mind during the developing process. It’s good to have a plan, and wise to be open to other possibilities as you work.

I placed another Radial Filter over the watermelon and checked the Invert Mask box so the adjustment was applied inside, rather than outside, the filter. 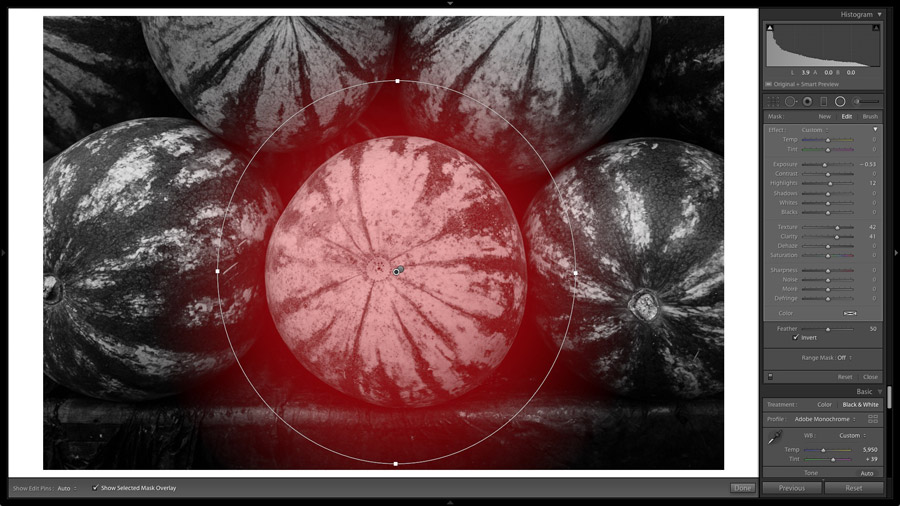 Then I moved the Exposure slider left to make it darker, and increased Texture and Clarity to bring out the textures on the surface. I also increased Highlights to add a bit of contrast.

Tip: If you have Lightroom 6 or earlier there’s no Texture slider, but the Contrast slider gives a similar effect.

This is the result. 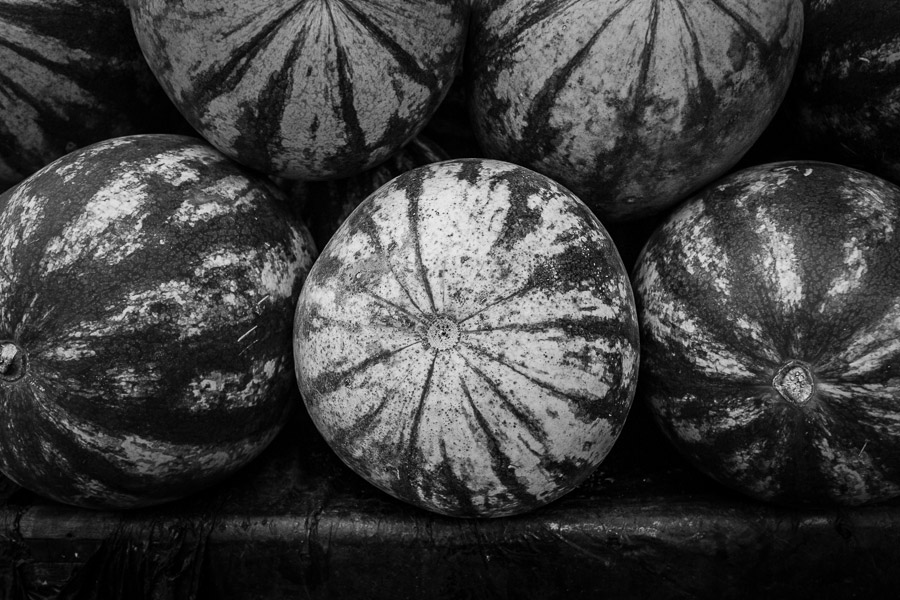 Dodge or burn using the Graduated Filter or Adjustment Brush

You can apply the same principles to local adjustments made with the Graduated Filter or Adjustment Brush. The idea is to match the tool to the shape of the area you want to make lighter or darker.

A typical use of the Graduated Filter is to make the sky darker or lighter. 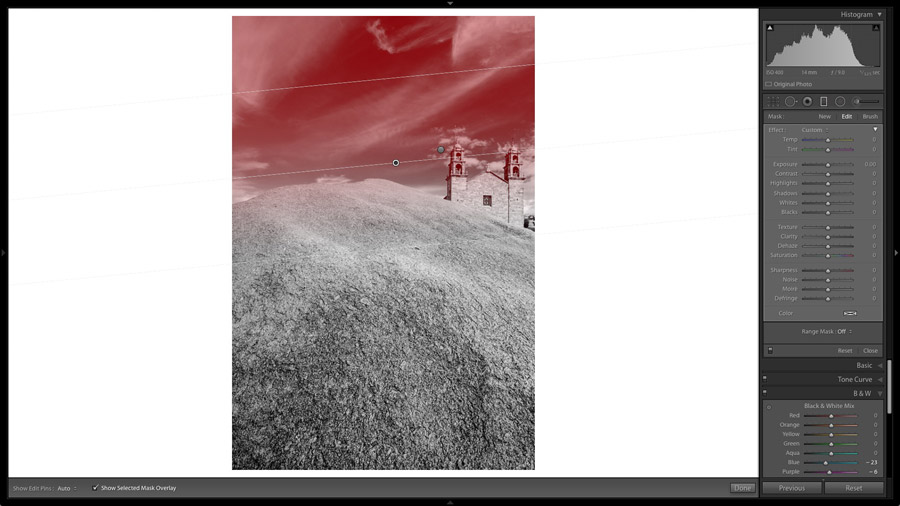 The Adjustment Brush tool is the one to use if you are dealing with irregular shapes, such as the man’s beard and hair in this portrait. 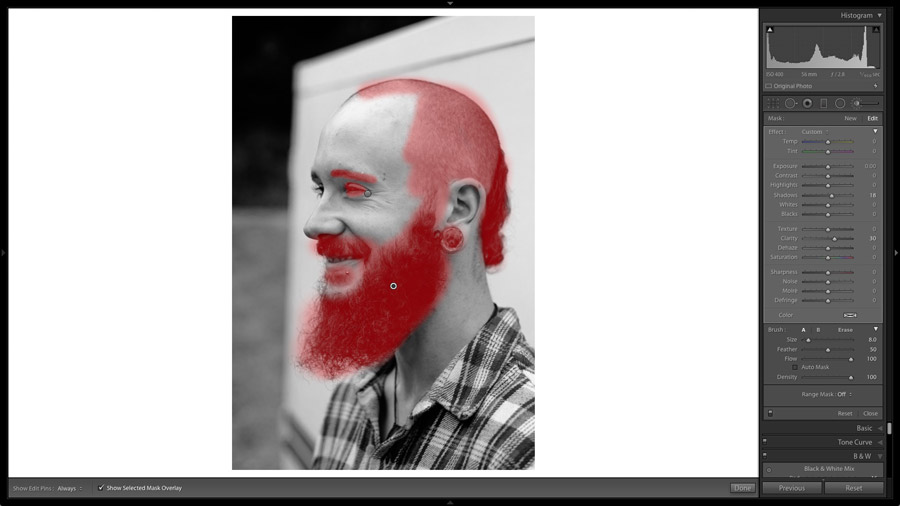 Let’s finish off with some more example of dodging and burning. These are here to give you an insight into the thought processes behind dodging and burning. This is important because you need to learn to see how your photos can be improved using dodge and burn before you decide which techniques to use. The why always leads to the how.

This photo of an old car has lots of beautiful textures that look gorgeous in black and white. 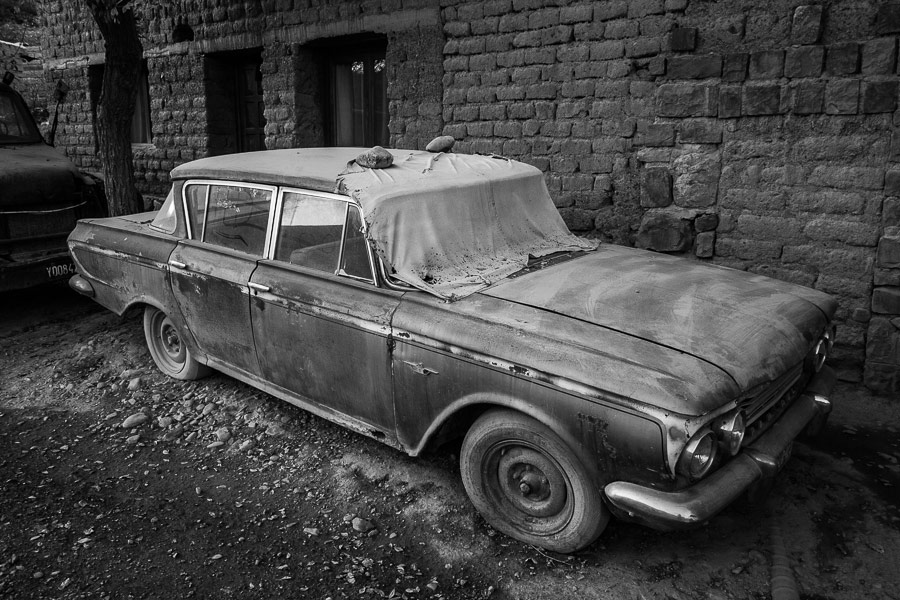 I used dodging to make the body of the car lighter without affecting the background. At the same time I increased Clarity and Texture to make the most of the weathered paintwork. 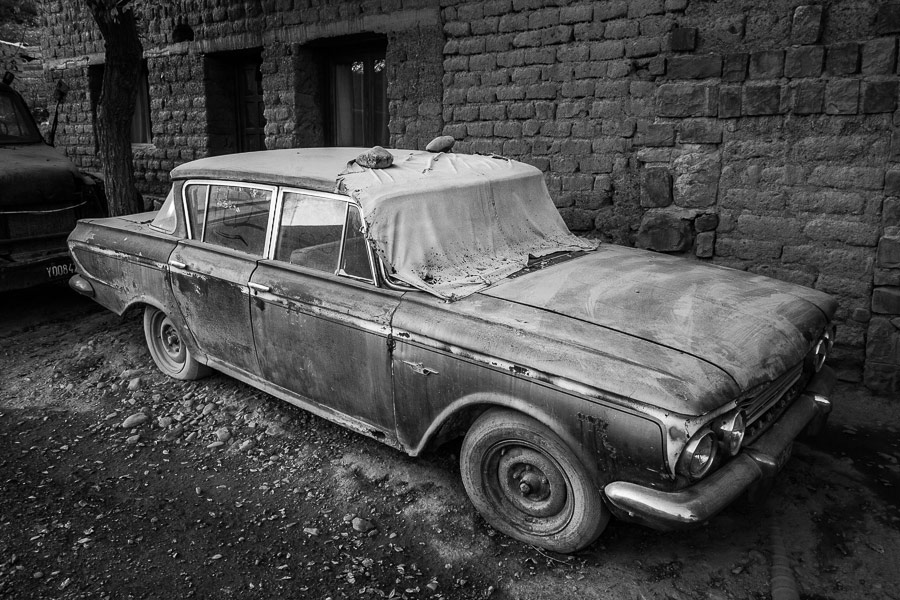 Here’s the mask I used, made with the Adjustment Brush. 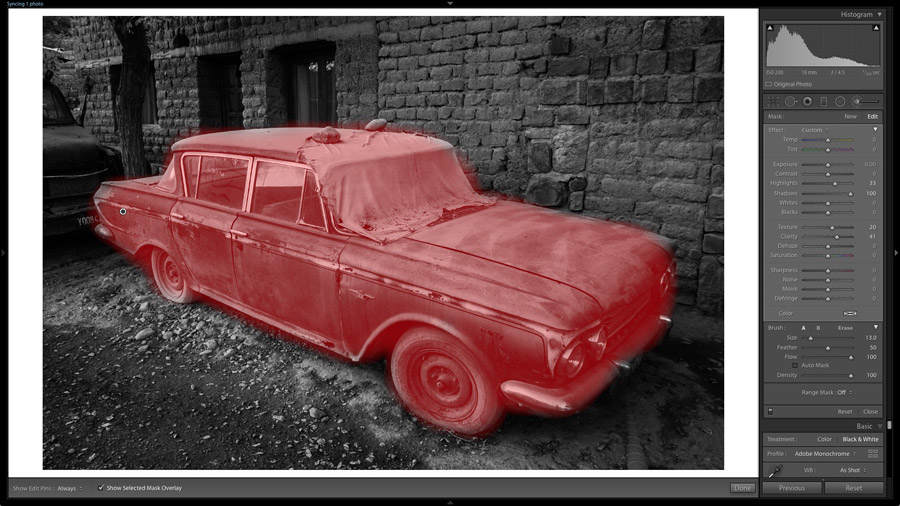 Portrait of artist at work

So far I’ve shown you two fairly simple examples of dodging and burning. But it can get more complex if you decide you need dodge and burn several parts of the image. You’ll also see how decisions about brightness are linked to decisions about contrast and Clarity adjustments.

In this example there are 5 parts of the photo that I’d like to dodge and burn. 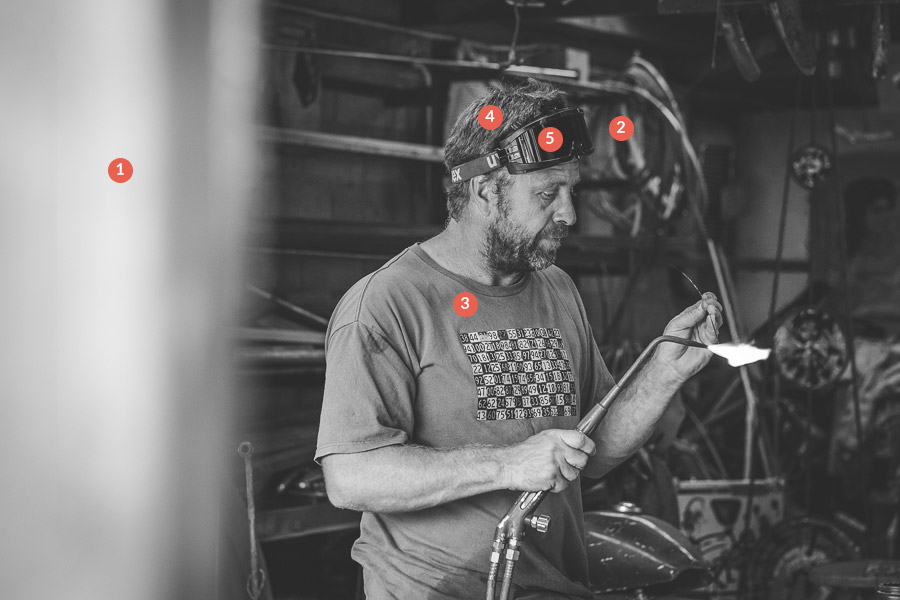 1. Make this out of focus bit darker so it’s a shadow rather than a highlight.

3. Increase the contrast of the man so he stands out more.

4. Make the hair and mask lighter (made necessary by the previous contrast adjustment).

Below you can see the masks I used to make these adjustments possible, and the final result. 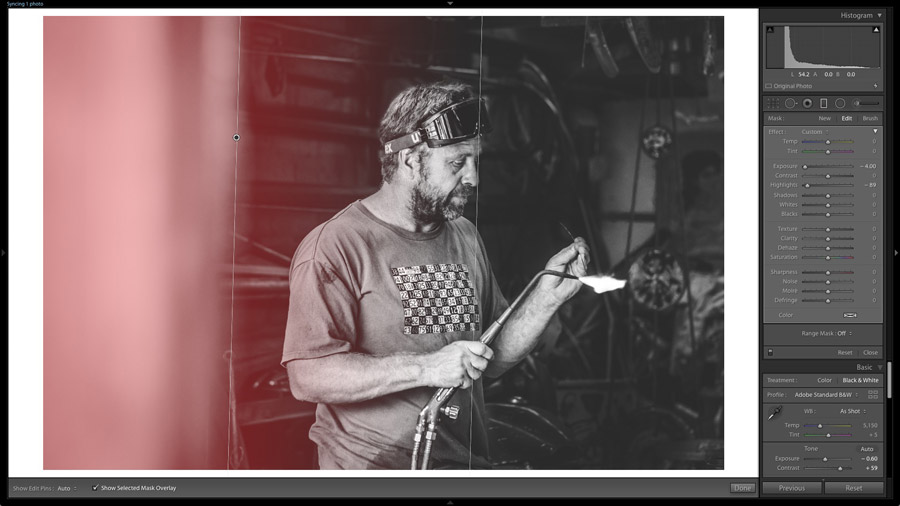 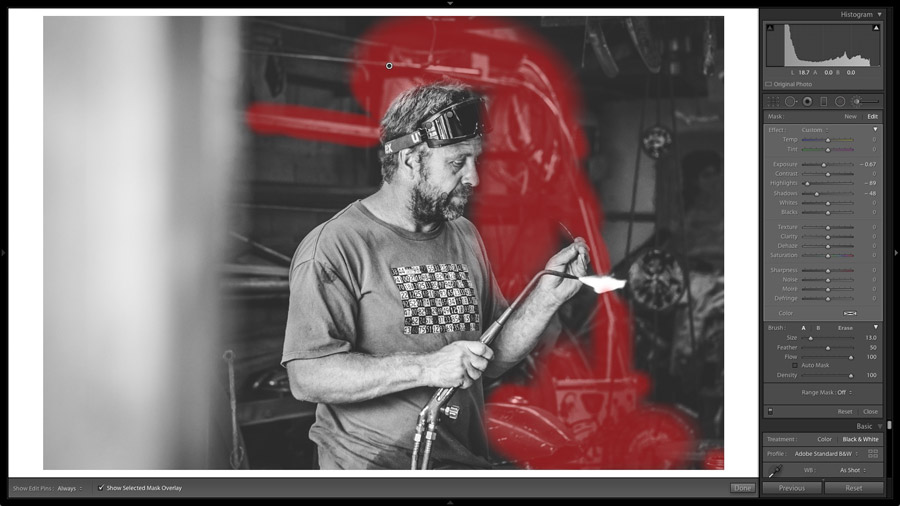 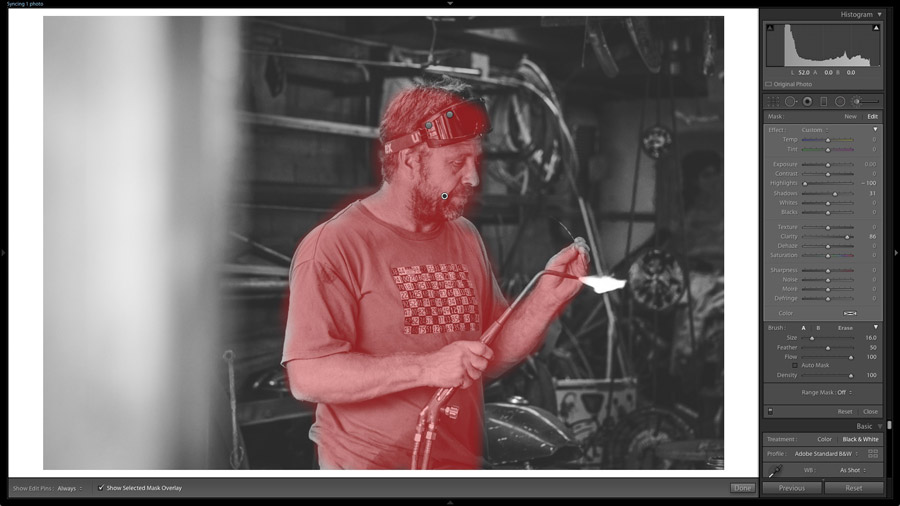 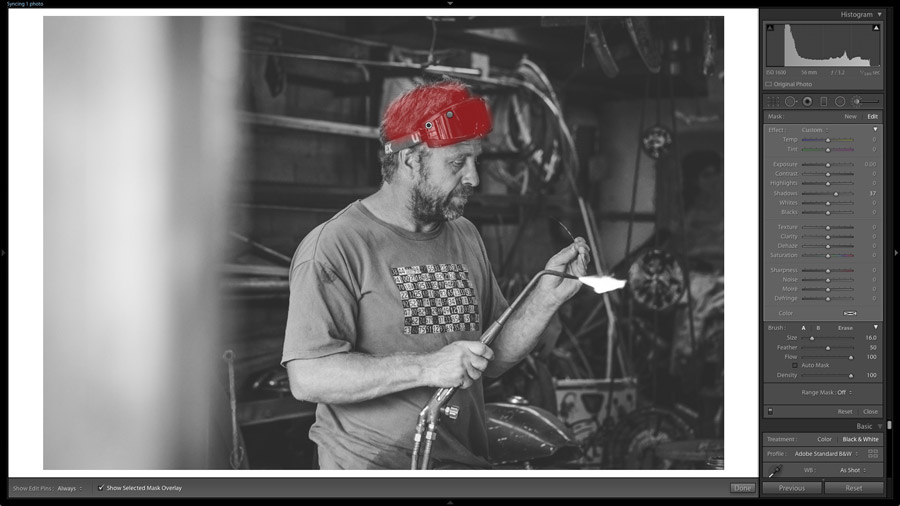 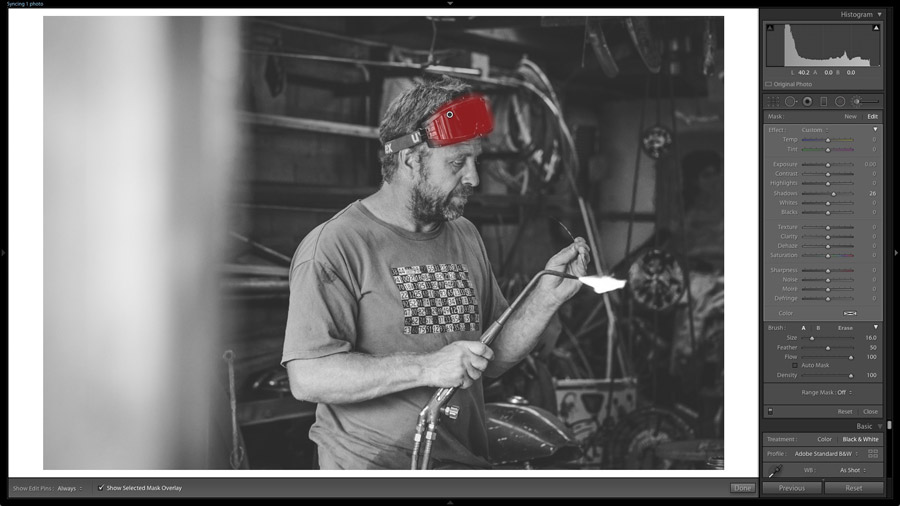 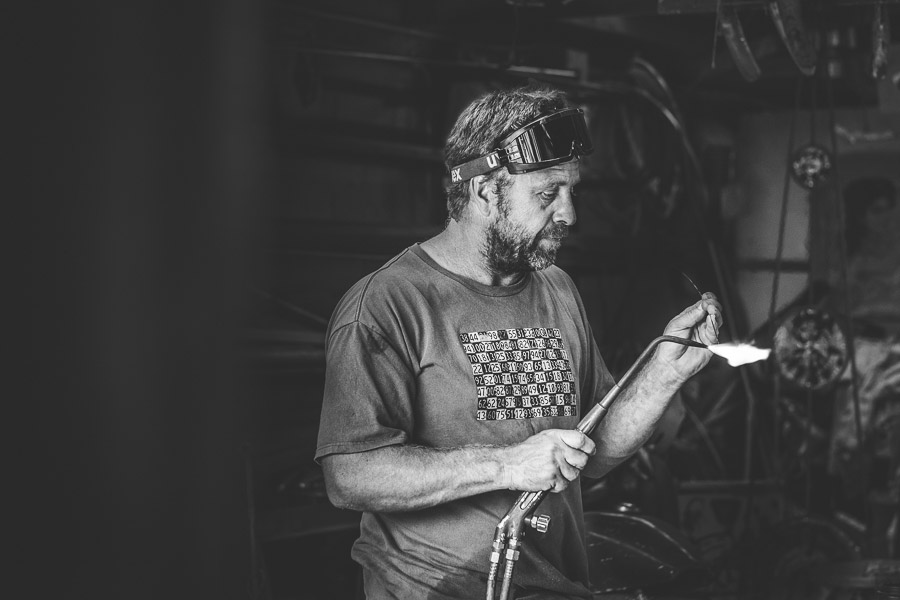 Get our latest tutorials (and two free ebooks) in printable PDF form to keep forever when you subscribe to Creative Photographer Magazine. Click the link to learn more 🙂