The 35mm format presents a unique challenge when it comes to composition – filling the frame.

Let me explain what I mean.

Photos taken with full-frame and crop-sensor digital SLRs and mirrorless cameras have an aspect ratio of 3:2. This figure compares the ratio between the photo’s width and height (width:height – width always comes first). It means the frame is one and a half times as wide as it is high. If you turn the camera on its side, the aspect ratio becomes 2:3.

The long rectangular shape of the 35mm format means that once you place your subject somewhere within the frame, you’re often left with space around it. The challenge is filling this space with something that is both interesting and relevant to the subject.

Working on the principle that we can improve composition by simplifying means that you could potentially end up with too much empty space around the main subject. That can reduce the impact of the photo.

Here’s an example. I made this photo in Mexico. There were two girls selling some items in the street. I saw the beautiful green wall behind them and knew it had the potential for a great photo. I asked them if I could take a photo and they said yes. 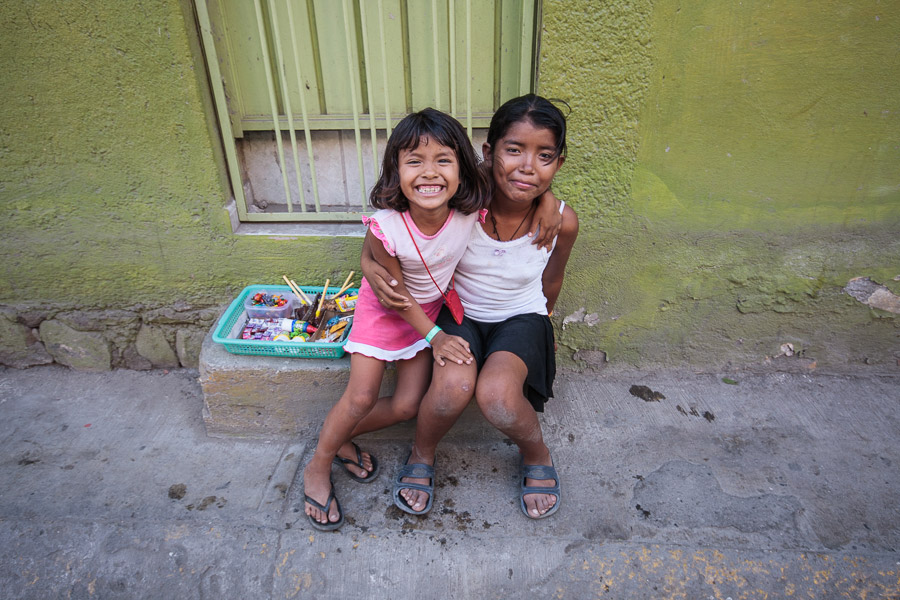 Afterwards I realized that I hadn’t filled the frame very well. The girls are central in the frame, and there isn’t much of interest around them. The result is empty space at either end of the frame.

One option is to crop the photo, but there is still empty space on the left-side. 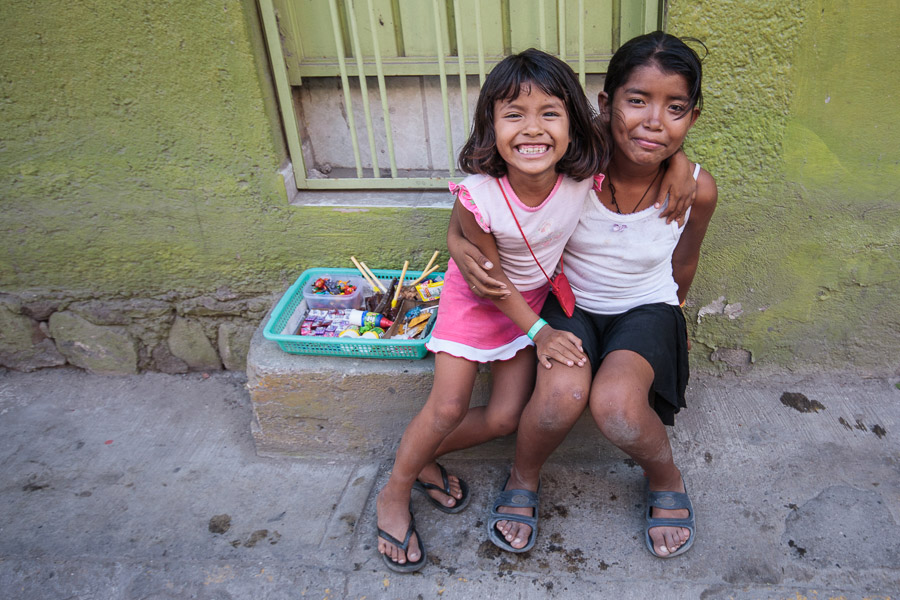 To be honest, there probably isn’t much I could have done in this situation, because there wasn’t anything interesting to fill the empty spaces. A solution is to crop to a shorter rectangle, such as the 4:3 aspect ratio used by Micro Four-thirds cameras. 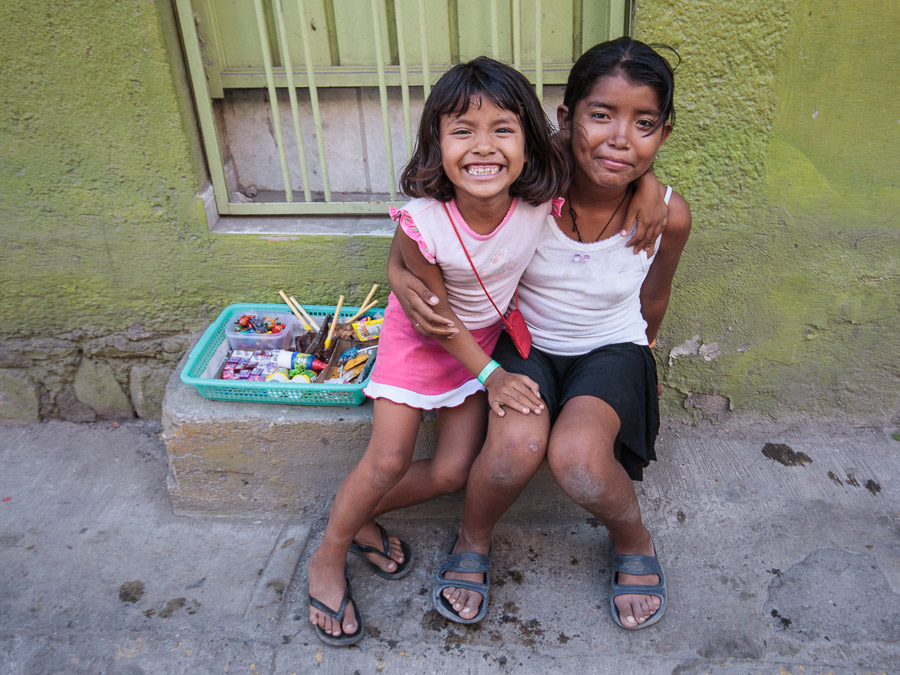 This problem of filling the frame is one of the reasons that some photographers prefer Micro Four-thirds cameras. And, more in the past than now, medium or large format cameras. Their aspect ratios give a shorter rectangle that is easier to fill.

How to fill the 35mm frame

So, how can we overcome the challenge of composing using the 35mm format? I don’t believe that we can use the aspect ratio of the 35mm format as an excuse for poor composition. After all, there are plenty of photographers that are good at filling the 35mm frame.

If you find yourself struggling to fill the frame, you probably need to take some steps to deepen your understanding of composition.

The key is to find something interesting to fill the space that complements the subject without distracting from it.

Let’s look at some examples.

In this portrait the model’s face takes up part of the frame. I asked her to lean against the fence, then used the white posts to fill the left side of the frame. The post create a line that takes the viewer’s gaze to the model. 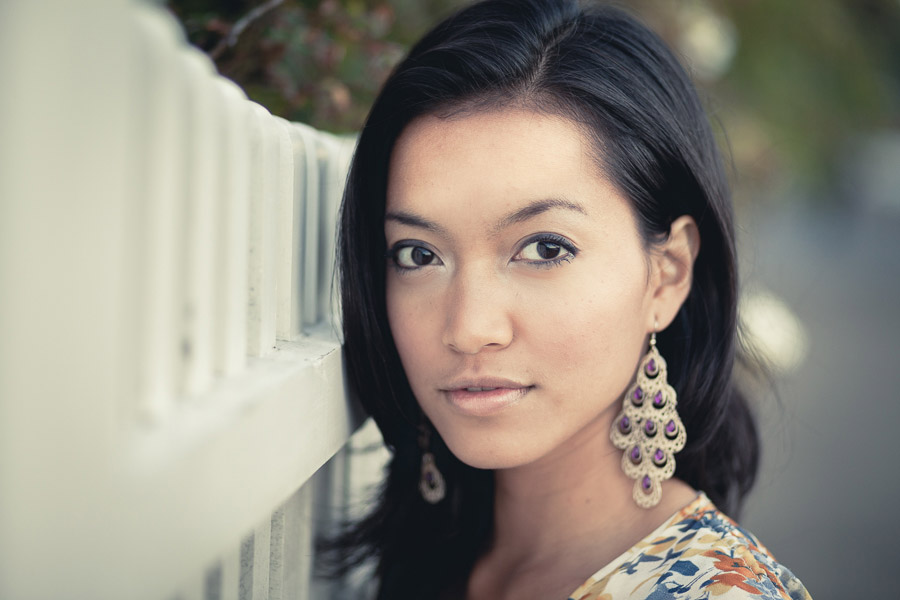 In the next portrait I placed the model on a third. One of the dangers of using the rule of thirds like this is that you end up with too much empty space around your model.

Learn more: Beyond the Rule of Thirds

Here though I wanted to show the background to give the portrait some context. There are old tyres, a metal roller door, an old oil can and a wall with peeling paint in the background. I used a wide aperture (f1.2) to make all those items go out of focus, otherwise they would have been too distracting. 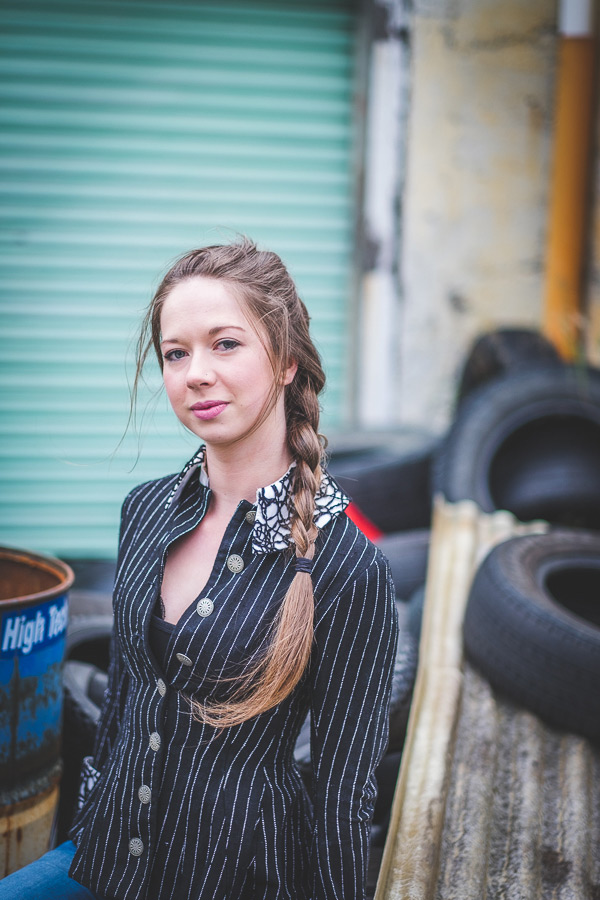 The next portrait uses a similar idea to the first two. I positioned the model in front of an interesting rock formation, then used a wide aperture to selectively focus on the model. The rocks are out of focus and create an interesting background that fills the space without creating a distraction. 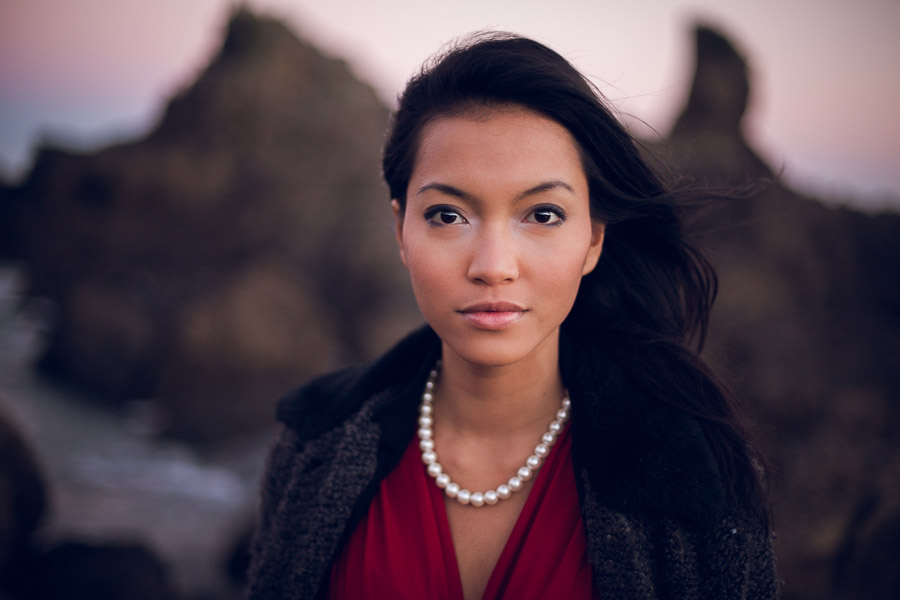 In this close-up photo of a red flower there was potentially too much empty space on the right-hand side. Luckily I was able to compose it in a way that included part of another flower. It fills the space without pulling too much attention away from the other flower. It creates interest in the empty part of the frame without being too strong. 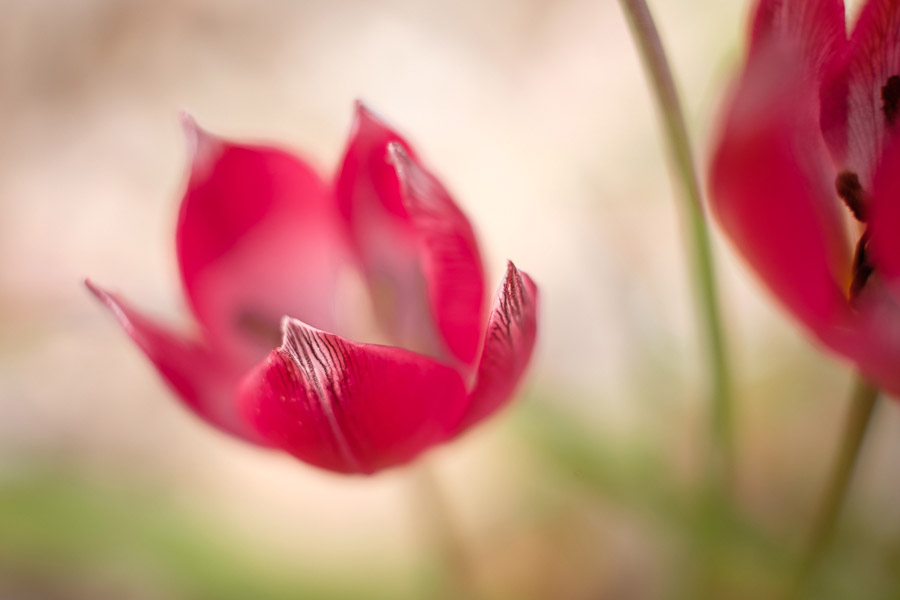 I made the next photo in a glassblowing studio. My aim was to show the process that the glassblower went through while making things. I did that by using a wide aperture (a necessity in the low light anyway) and focusing on the hot glass and the glassblower’s hand.

But I made sure that the background was filled with interesting items, in this case the tools he uses while at work. 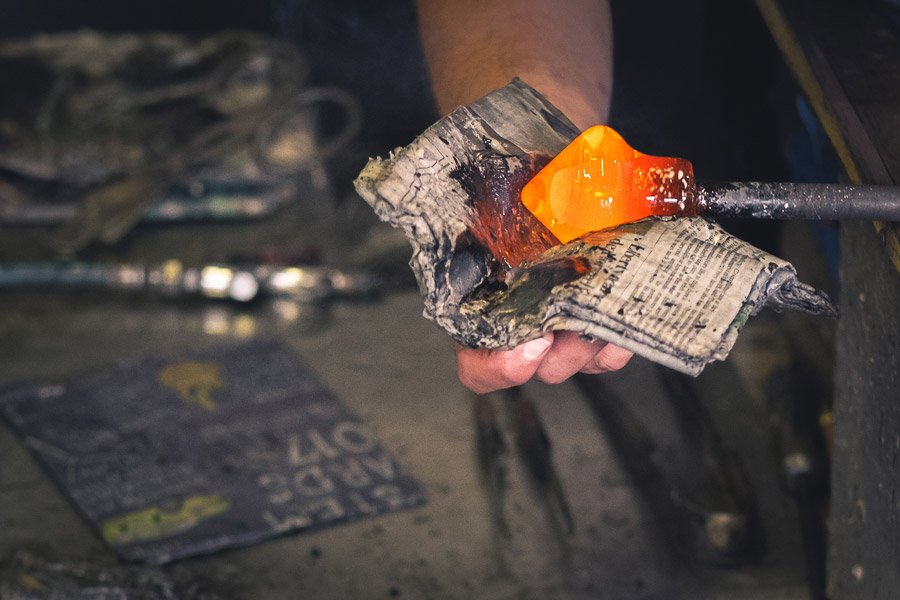 The final example is a photo I made in Beijing of two men playing Xiangqi (Chinese chess). I placed the board itself in the middle of the frame, with the two men either side. This was a natural and easy way to fill the frame. I deliberately included the feet of somebody watching the game as it’s an interesting detail. 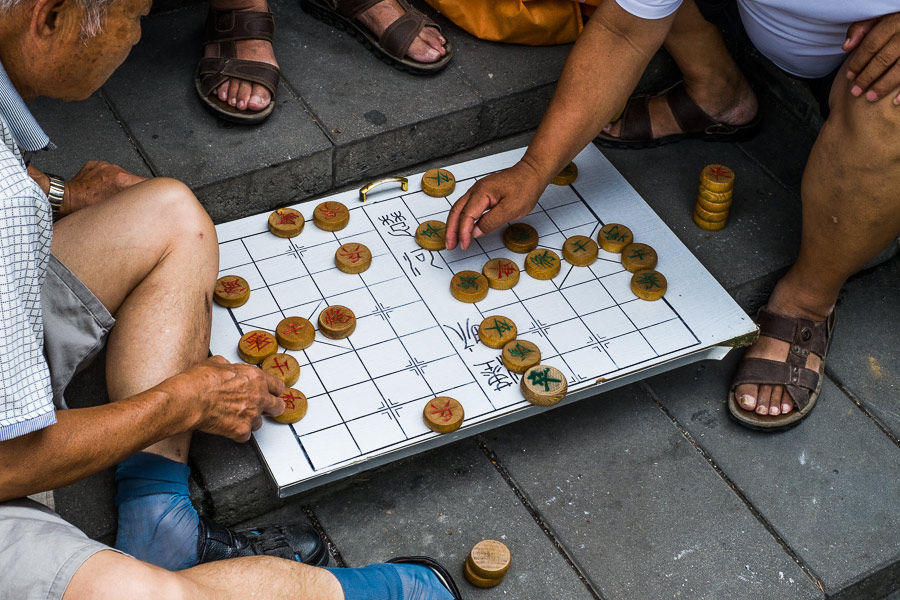 Regardless of what aspect ratio you are using it’s important to fill the frame with interesting detail and to avoid the use of too much empty space. This is especially important with 35mm cameras as the 3:2 aspect ratio lends itself to compositions that leave empty space at either end of the frame.

It’s also something that comes into play if you tend to place your subject on a third, as this can result in a lot of empty space in the frame. It’s not enough to place the subject on a third and then think that the job is done – you need to think about the entire frame and what’s going on in every part.

The skill takes time to develop, but with practice you’ll become faster and better at it.